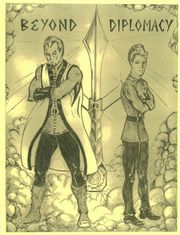 Diplomacy is a 145-page gen Star Trek: TOS novel by Ann K. Schwader. The publisher says it is "A novel of Klingon Custom, Duty and Honor."

This zine has a sequel called One Blade, One Blood.

It is often listed in Klingon dictionaries alongside the two novels Diplomacy & Empire and One Blade, One Blood as the source of the word: "gozhe - [n] "Feces," or "excrement." [1]

Summary from the Publisher

"This is a Klingon novel of exceptional magnitude. This extremely well-crafted story takes place in the John Ford FINAL REFLECTION Klingon universe and follows the life of Neysa El Man, a Starfleet lieutenant whose specialty is Klingon culture and custom. In order to bring eventual peace between Federation and Empire, Neysa's diplomacy and talents find her aboard a Klingon starship in the hopes of promoting a civil war within the Empire. In the meantime, an interesting friendship develops between Neysa and Thought Admiral Karan, a Klingon she met and befriended years before during a Starfleet Academy Cultural Exchange Program. (A prequel to this novel appears in More Missions, More Myths #9.) This is a must read for Klingon fans, and a fascinating read for anyone who enjoys human/alien interaction and adventure in strange, new worlds."

If you enjoyed reading the FINAL REFLECTION by John Ford which dealt with the Klingons and the beginning of contact with the Federation, you'll enjoy this zine tremendously. Lt. Neysa EI Man is a Klingon alien contact specialist precisely assigned to the Excalibur, which patrols the Triangle section bordering the Klingon empire. The story begins with Neysa reading the death notice of a Klingon Admiral she had known through a Klingon-Federation cadet exchange at the Academy. It disturbed her greatly to find out about his death over three months later, indicating to her that there were serious political upheavals occurring in the Klingon empire. She continued to read the report until she couldn't read any further, the went to bed. She woke suddenly, hearing a noise in front of her door. Neysa fumbled with her phaser as she went to the door but was right in her caution as someone came in and tackled her. When she heard a voice speaking in Klingon, she froze then relaxed as she recognized the voice although she hadn't heard it in years. Karen zantai-Riskadh, the Klingon Admiral whose death notice she had just read stood there. Shocked, she took a deep breath and got out a drink for herself and Karen. "Why are you here, a week out on the wrong side of the border at warp; six and in my quarters in the middle of the night?" she asked and Karen's reply was that he needed transportation. She added up the angles and came up with the conclusion he was asking for her help. Further conversation reveals that he was going to attempt to overthrow the Klingon emperor because he didn't agree with the way the emperor was leading the empire to a needless war. Neysa was shocked at the magnitude of Karen's plans but she decided to help him at least get back to the empire. Neysa gets caught up in the struggle between the Federation and the Empire and also between Karan and his people. After a long and difficult struggle, Karan wins but the story leading to his success is a fascinating one and well worth reading. Ann shows a deep understanding of Klingons and has a gift with words as it is impossible to put down the zine until you have finished it. The artwork is also good, enhancing the story and painting a clear picture of Karan and Neysa's struggle to over turn the Klingon empire and get it on a more moderate course in federation and Klingon relations. [2]

For those of you who like something different, send for "Beyond Diplomacy" by Ann Schwader. It is a Klingon novel and is in the FINAL REFLECTION universe created by John Ford, pro writer. Perhaps some of you would consider it a "Mary Sue" story. I'm not sure where the line is drawn, but the Klingons in it are very interesting. Perhaps first you should read MORE MISSIONS MORE MYTHS #9 since there is a prequel in it which I thought excellent. In fact, I enjoyed it even more than the novel. It tells about a Federation/Klingon exchange program of cadets and how the heroine, Neysa El Man, meets up with Karan, a Klingon exchange student. The novel continues their adventures several years later when he has become an Admiral. [3]

If you like stories about alien cultures as much as I do, then you will enjoy BEYOND DIPLOMACY by Ann Schwader. The story concerns the friendship that develops between Lt. Neysa El Man, an Alien Cultures specialist, and thought Admiral Karan, a Klingon she met and befriended years ago during a Starfleet Academy cultural exchange. In a desperate bid to defuse a war between the Federation and the Empire, Neysa Journeys with Karan to the Empire and becomes involved in the rebellion against the Emperor. I was on the edge of my seat the whole time I was reading this zine. Was Neysa going to survive the plots and counterplots around her? Would the rebellion succeed? Would there be peace between the Federation and the Empire in the end? Those readers familiar with Fern Marder and Carol Walske's NU ORMANEL series will notice some parallels between that cycle of stories and BEYOND DIPLOMACY. Both involve human women who meet Klingon men, go to the Empire, and become Klingonized. In contrast to the lighthearted and humorous NU ORMANEL series, however, BEYOND DIPLOMACY is set in J. M, Ford's blood-and-intrigue Klingon universe and the resulting difference in tone is enough to overrride any surface similarities. Technically speaking, the writing is excellent and flows well. Schwader integrates her Klingon phrases and customs so well with Ford's that I could have sworn that Ford wrote the whole story. The artwork—soft pencil sketches by Sherry Veltkamp—is good, but I would have preferred to dispense with the interior art altogether in favor of a cover illustration and page borders with Klingon calligraphy. However, I tend to place good writing over any kind of art or graphics to begin with so I'm biased. I also highly recommend "Know Thy Enemy, the prequel to BEYOND DIPLOMACY, which is printed in MORE MISSIONS MORE MYTHS #9 (not MM #12 as stated in TREKLINK #16). "Know Thy Enemy" tells of Neysa and Karan's first meeting at Starfleet Academy. The contrast between the idealistic young cadet Neysa starts out as in the prequel and the more worldly lieutenant she becomes by the time of BEYOND DIPLOMACY is nicely handled. "Know Thy Enemy" is the centerpiece of MM#9 and I would recommend buying the zine simply to get that story. Aside from L. P. Santos' "Perchance to Dream"—a story about Tal and his half-Vulcan son, Ty—I wasn't impressed with any of the other stories in MM#9 although the zine does have some good illustrations and poetry. [4]