Hellguard Social Register is a Star Trek: TOS letterzine edited by Tim Blaes. There were two issues. Its emphasis is on Romulans and the character of Saavik.

It has a fiction sister zine by the same name Hellguard Social Register. 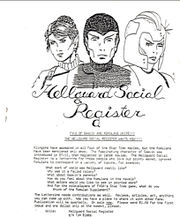 Hellguard Social Register 1 was published in March 1987 and contains 5 pages. 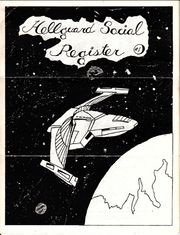 Reactions and Reviews: Issue 1 and 2

BEYOND THE FARTHEST STAR #1 AND #2 are steamy, graphic (both in illos and diction), heterosexual tales featuring the ENTERPRISE crew, and a few Klingons, too. Don't expect much in the way of soul-searching interludes, especially in #1. Just about all the stories start off on shore leave, as if there's nothing interesting going on on board that didn't start on leave. BTFS #2, plotwise, is better than #1, with McCoy finding solace in the arms of an old flame, Christine stumbling upon what turns Spock on, Kirk having trouble with his tomcatting, a group written, punny spoof (kind of x-rated meets cliche), and a portion of the adventures of a xenophile. [1]

Hellguard Social Register 2 was published in January 1988 and contains 20 pages. This issue is notable in that it contains a LoC from Henry Jenkins. 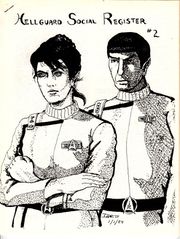 #2 is now out, and I must say I'm impressed. There's a wealth of good material there for any writer to capitalize on. I received it one afternoon and spent a relaxing three hours reading the interesting articles and reflecting on what I had read. The zine has a two-column format, but only prints the front side of the page. Some misspelled words here and there, and the editor's comments, interspersed as they are in the text of the letters printed, are sometimes confusing, but all in all, I haven't had so much fun with a letter-zine in a long time. [2]