From Fanlore
(Redirected from Locusts and Wild Honey)
Jump to: navigation, search 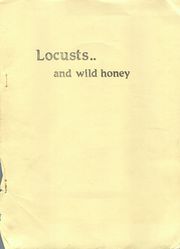 Locusts.. and wild honey is a slash 131-page Star Trek: TOS anthology. It was published in the UK.

The art is by Ann Humphrey and Caryl Sibbett.

See reactions and reviews for Last Night is the Night.

See reactions and reviews for Which Came First?.

See reactions and reviews for For Spock.

See reactions and reviews for To Cease Upon the Midnight.

See reactions and reviews for Never the Twain.

See reactions and reviews for The Test.

[zine]: From the editor of THE VOICE, comes 132 pages of poetry, vignettes and stories. In each prose selection, Kirk and Spock are strong, well-defined and recognizable characters who deal both with personal problems and those of the Federation. There are neither mirror universe nor slavery stories. The zine includes a mixture of relationships for Kirk & Spock: a first time, an only time, established, and "never got that far". In order of appearance: [see each story for her comments] [1]

This is a thought-provoking zine, dealing with the K/S relationship at various ages and stages from its first establishment, right through to what must surely be its finale.

The bulk of the zine consists of seven stories by four authors, and is augmented with five poems, a small amount of artwork, and two very funny sketches.

Opening the stories, 'The Test' by Eva Stuart is also, chronologically the earliest, and is concerned with a youthful Kirk and Spock, both serving lieutenants on different ships; back at the Academy for final year Command Training tests. The most important of these tests is the Kobayashi Maru. There, as we all know from the film, Kirk altered the computer to allow a possible solution; and the story works up to this event, at the same time developing a theme of the rapidly established relationship between the two young men, who are sharing quarters. And it is rapid! I certainly blinked at least twice at Spock's forthright and swift declaration. This is a younger Spock, however. One who has not yet entrenched himself into our familiar, austere Vulcan. So we can accept his declaration. I found this earlier setting, an interesting one, Kirk and Spock really do sound, and act like younger versions of themselves, and I particularly liked the way we discover Kirk's character through Spock's growing awareness of it. I did find it a little hard though, to accept the ending, feeling, that Kirk's determination, and ingenuity as underlined by the Kobayashi episode, would somehow have blasted through all barriers to make the impossible happen again.

Eva Stuart's second story "Tangled Skein' is at a much later stage in time, and opens with the idyllic prospect of a two months' shore leave for our Duo. Unfortunately for them, this is shattered by a middle of the night request from T'Pau now a member of the Federation Council - that they go to the distant planet, Gaia, to do some 'observing' for her. Gaia, a newly colonised planet, of mixed Human/Vulcan population, is at the end of its settlement programme, and is about to vote whether or not to join the Federation - hence T'Pau's interest. A scene in the Governor's Palace, where Kirk and Spock are staying, shows us that while most Gaians wish either to join the Federation or to have another interim period before deciding, there is a small faction that wants the planet to be completely independent, and whose leader has withdrawn into Dar-an-Sha, a state from which he will only emerge alive if the wishes of his sect are realised. An interesting side issue reveals the Governor to be Spock's cousin and former lover and the story develops to the accompaniment of Kirk's reaction to this. After a powerful double climax, the tension eases; the Gaians decide their future and there is a nice, relaxed ending with all doubts resolved, at the shore leave house where the story began. I enjoyed this story very much. There are some very attractive descriptive passages and a warmth and maturity between the lovers which we would hope to find at their stage of relationship.

The three short stories by Kate Daniels are what I think of as cerebral action stories, where almost all the action, apart from the obvious, takes place in the minds and verbal exchanges of the characters. As this is my favourite form of K/S, I read these stories with special interest.

'Last Night Is the Night', the first of the three, takes place exactly seven years after Spock's first Pon Parr, and is concerned with the trauma and solution of his second. It is a satisfying story with some nice humorous dialogue. There is a lovely scene where both Kirk and Spock are in a state of extreme panic and an original theory about the true nature of Pon Farr which is different but credible.

The second story 'The Night Before' is just post-V'Ger and shows our heroes catching up with each other and with their relationship after the years of separation. Although the end is inevitable, maddeningly beckoning both them and us, they will neither of them take the easy route via bed, realising they must first resolve their problems; namely, Kirk's self-doubt and unwillingness to re-start a relationship unless it is going to continue. Like them then, we have to control ourselves until, at last, Spock decides enough soul-searching has taken place and the time has come for action!

'For Spock' the last of the three is also the most complicated. Spock regrets the waste of all Kirk's 'potential'. He has the notion to seek out any possible child of Kirk's who may he in need of care and bring it up between then. As the story develops it becomes apparent that this desire is not as straightforward as it appears; both men are experiencing guilt feelings, imagining their relationship to be limiting the other's life. Each deals perceptively with the other's guilt and after much discussion and more soul-baring they come to the heart of the situation and the story is concluded in bed; where better? As in the second story, it is Spock who proves to be the more impatient, Kirk again doing most of the worrying. I liked these hints of role-reversal. It is very true that we got like those we live with.

All three stories make good reading. The easy, relaxed style creates just the right atmosphere and I enjoyed the humour, singling out the last line of 'Last Night Is The Night' as one of my three 'highlights of the zine.

Running at thirty seven pages, Ray Owen's 'Never The Twain' is the longest story in the zine. It begins with Kirk and Spock, now a long-married couple of twenty-three years standing, coming together again, after an absence of eleven months, to join a Federation team intent on persuading the Klingons to sign a Joint Peace Treaty. The leader of the Klingon faction is Kor, mellowed as the writer describes in a marvellous simile, into something like... "An old compost heap...rich and murky, seething with pungent surprises". The unlikely treaty is signed aftar some dubious and to me rather obvious double-dealing by Kirk; but our heroes' troubles are far from being over. In fact they are just beginning. To his horror, Kirk discovers he is expected to transport the seventeen members of  the Klingon team back to their homes and as this story has homosexuality as the Klingon  norm, regarding women as an insult, or an open invitation," we can sympathise with his dismay. Protecting his crewwomen from assault is not to be his only problem either. Halfway home, the Enterprise encounters a life-support capsule containing that other well known Klingon warrior Kang, now Kor's sworn enemy and his wife, Mara. The rest of the story deals with Kirk's attempt to keep Kang's presence secret from Kor, and the subsequent future when he fails. I was very impressed by the writing in "Never The Twain'. It is strong and crisp with some very clever dialogue but if the author had not reminded us every so often that we are reading K/S, I would have forgotten! It is a little hard to believe that even after twenty-three years, marriage to Kirk would be quite so bland, or that physical need has reached so low an ebb as to allow long periods of separation. Read as straight Trek with a nice mental bond though, it is an excellent story.

I found 'To Cease Upon the Midnight' by Vivienne Rivers a most chilling tale. At first sight deceptively simple, it becomes more complex with each subsequent reading. It is difficult to review without exposing too much of the plot and, anyway, I think each reader may have to come to his own conclusion. It did pose some unanswered questions for me. Wore Kirk and Spock supposed to have been bonded? If not, were they so close that a natural bond has grown between them? The first premise is not mentioned, and indeed, from Kirk's revelation that they were were never lovers, seems unlikely, so I am assuming the latter to account for the strength of the force disrupting Kirk. Set three months after Spock's death, the plot concerns Kirk's strange mental and emotional experiences which McCoy understandably attributes to grief. There is more to it than that though. Some force seems to he pulling Kirk away from life and there is nothing he can do about it (even supposing he wants to), except perhaps heed Spock's last words to him, "Don't grieve, Admiral!" Which Kirk now sees as a warning. If he is right, it must prove, as did Spock's sacrifice, that Spock is not intentionally, pulling Kirk towards him.. Yet it must surely be a useless warning, for how could Kirk possibly not grieve? There is no eagerly sought reunion then, but one to which Kirk is doomed; and the writer has him move through the story in a trance-like atmosphere which adds to the  chill. We are comforted little at the end, when Kirk regains peace, but my main  sympathies were for McCoy who fate has just kicked again. A powerful and disturbing  story.

The contrasting styles and plots of 'Locusts... and Wild Honey" add up to a most satisfying read. I have mentioned one of my personal highlights. The other two have to be Eva Stuart's lovely poem 'The Gift'., and right at the end, perfectly placed as a finale, the tiny, brilliant sketch 'Vulcan Justice?' by Jan Burton. [2]