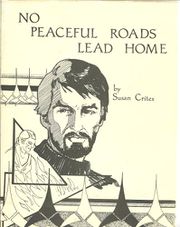 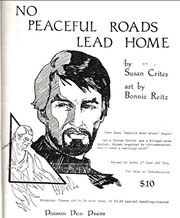 No Peaceful Roads Lead Home is a gen 256-page novel by Susan Crites.

Published seven years after its prequel, Games of Love and Duty, it is one example of the tremendous patience fans of the time had.

From Bill Hupe: "A Klingon, now married to a Terran female, must find himself a place in Federation society." 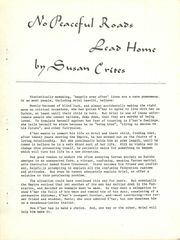 the one-page summary printed in Games of Love and Duty

Statistically speaking, 'happily ever after' lives are a rare phenomena. Or so most people, including Ariel Leavitt, believe.

Mostly because of blind luck, and almost accidentally making the right move on critical occasions, she has gotten K'har to agree to live with her on Durnin, at least until their child is born. But Ariel Is one of those unfortunate people who cannot believe, deep down, that they are worthy of being loved. To insulate herself against her fear of trusting in K'har's feelings, she tells herself he stays because he is "being kind", "trying to decide on his future", and other fairytales. K'har wants to commit his life to Ariel and their child, finding that, after twenty years serving the Empire, he has missed out on the fruits of a loving relationship. But she continually holds him at arms length, until he comes to believe he is a very minor part of her life. With no viable way to change this presenting itself, he patiently waits for something to happen which will turn his life in a new direction. One good reason to endure the often annoying Terran society on Durnin emerges in an unexpected form; a vibrant, confusing, amusing Terran martial arts instructor named Steve Greenwood. Steve becomes his friend and confidant, helpfully attempting to explain all the confusing Federation customs and attitudes. But even he cannot adequately explain Ariel, or offer a solution to this perplexing problem. The situation could have continued this way for years. But eventually the Empire noticed that yet another of its men had settled down In the Federation, and decided an example must be made. So they sent a delegation to show K'har the folly of his ways and remind him of his duty, consisting of a consisting of a persuasive diplomat, K'har's youngest brother, and -- most convincing -- his former friend and student, Kevic; who once admired K'har, but now despises him as a decadence-loving traitor.

Now K'har has to make a choice. And, one way or the other, Ariel will help him make it. [1]

This is the sequel to "Games of Love and Duty". Dr. Ariel Leavitt was kidnapped and held for ransom by Klingons on a barren, frontier outpost. During her captivity, she formed a tenuous but powerful relationship with K'har, her Klingon guard. Now she's been rescued and K'har accompanies her back to the Federation to help take care of her and their unborn child. But not all of the complications in this story belong to the heroine. K'har has some life-changing decisions of his own to make, and the Klingons are more than willing to send along a few of his friends to help him make them.[2]

Well, folks, this is the sequel to Games of Love and Duty. It's been a long time coming, but it's worth the wait. Susan Crites continues her take of Dr. Ariel Leavitt, who was kidnapped and held for ransom by Klingons on a barren, frontier outpost. During her captivity, she has formed a tenuous but powerful relationship with K'har, her Klingon guard. And now she's been rescued, and K'har accompanies her back to the Federation to help take care of her and their unborn child. But not all of the complications in this story belong to the heroine. K'har has some life-changing decisions of his own to make, and the Klingons are more than willing to send along a few of his freinds to help him make them. On top of all this, the uncertainty of their own tenuous personal situation plays an integral part in a very absorbing and well-executed study of personalities. I feel this zine lacks some of the humor that was present in the previous zine, but then, the subjects being handled here are not ones to be taken lightly either. However, the Klingon fish-out-of-water view of the Federation that K'har presents to the reader is frequently amusing and interesting. The illustrations by Bonnie Reitz are superior to the ones she did for the first volume. However, I definitely did appreciate the fact that the same artist was chosen for both zines. It adds a certain note of consistency. Production values are generally high, although there are places where the type tends to fade or be a bit on the pale side... If you read the first zine, then this one is a must. If you haven't, it won't matter! The story is handled so that it can stand on its own with no problem whatsoever. [3]

Ariel Leavitt is one of McCoy's favorite cousins, so he is understandably concerned when the ship on which she was a passenger is captured by the Klingons. The Enterprise rescues Ariel and K'har, the guard who helped her to escape from Klingon territory. The two are given a lift and a loan, and then they are on their own in a predominantly human colony. Leavitt is not your typical 23rd century working woman, though she is well-payed as a physician, most of her salary goes to pay off her ransom from the Klingons. Ariel is pregnant with K'har's child, so in addition to the usual problems a couple faces, they face the additional dilemma of a cross species pregnancy. The characters are realistic. Except for the husband's bifarious eyebrows, Ariel and K'har could be the "couple next door", beset with misunderstandings about what they expect from each other in sex, lack of money (the expense of feeding a too-large do); and maintaining the macho image of a Klingon when K'har gets the flu. Underlying their domestic problems is the uncertainty about their future. The story binges on the birth of the child, because K'har has vowed to stay with her until then. Ariel doesn't know if K'har even wants to stay with her. K'har doesn't know if she really needs him, and fears going home would mean dishonor, death or torture. The story is slow paced, but not too slow to hold a reader's attention. Illustrations by Bonnie Reitz are lively and carry the novel through the less interesting scenes. [4]

[regarding the two novels in the series]: The two novels center around a woman who is Dr. McCoy's cousin, Ariel. That is the only connection to Trek. The E characters appear briefly at the end of GAMES and at the beginning of ROADS, but the novels are about McCoy's cousin's long love affair leading to a marriage to a Klingon martial arts instructor. The first novel has Ariel captive among Klingons (Classic Trek variety, no ridged heads), guarded by K'har. She cures his leg of a serious infection and gradually becomes involved in his life - and he in hers. By the time tho ENTERPRISE arrives to rescue them, it seems logical for him to flee with her, only partly because she's pregnant with his child. (She has not been raped by him, but she isn't in love with him at that point, either. Or at least, she doesn't think so.) That scenario is recapped very briefly in ROADS, and in that brevity, it sounds ludicrous. Crites is such a good writer, though, that she made me believe every absurd word of it. I was leery about buying these books because fandom has produced few writers capable of creating characters independent of the E. crew. But I trusted Devra Langsam's recommendation, and not for the first time, found out she was right. GAMES is told from Ariel's point of view, and ROADS from K'bar's point of view. GAMES is set in a Klingon garrison, and ROADS on a Federation planet. These are novels about adjusting to an alien environment, and though they lack any serious plot involvement with science, I feel they qualify as science fiction in their own right. (The standard defn. of sf is "If you can take the science out and still have a story, it isn't sf." Under that defn., this doesn't qualify.) Both novels are deep, powerful novels in their own right, and I have yet to figure out why they are marketed as Trek fanzines when they stand alone so very well. It's possible there is no commercial market for this kind of fiction, science fiction devoid of science and driven entirely by pure, powerful relationship plotting. I, for one, wish there were! The only other place I have found novels of this calibre is in the K/S genre. Scholars like Joanna Russ have pointed out that one appeal of K/S to hetero women is that it depicts a loving, deeply sensitive relationship between two partners who are equals in all things. Such scholars seem to believe that modern readers aren't able to accept equality in a relationship where one partner is female, because we are culturally conditioned to believe female [equals] inferior. There might be something to that, but if we're going to break that cultural conditioning, we need novels like GAMES and ROADS, novels which depict two independent, heroic, lead characters admiring each other for their heroism and thus hacking out a relationship between equals even though they happen to be male and female. [5]