An explicit het zine by the same fans is Shhh Private Dix.

At just over £3 for 89 pages, this zine is not only excellent value, it's also a damn good read! It consists of three long stories with illos by Tina White and Janet Lawn. The first story, 'A Friend In Need' by Steve Tidey, concerns a talk between Riker and Troi after the events of 'The Child'. Well written and paced, it's an excellent follow-up to the episode. 'Alas for the Dlnsoaurs' is the longest story and Janet Lawn presents us with an intriguing look at the hidden links between Q, Nagelum and other 'super-beings' encountered in the Star Trek universe. Captain Picard quite literally disappears from the bridge and Riker and Co. have to find Q in order to get Picard back. In the process, both Picard and Riker discover something more about the Q Continuum, Geordi gets his sight, Worf scratches an itch and Data finds being Human isn't what he thought it would be. I did think Geordi adapted far too quickly to normal vision - he'd have to relearn - but that apart, there are interesting ideas which provoke discussion. There are a few unfortunate typos, but 'Alas for the Dinosaurs' has some marvellous turns of phrase and characterisation. Annette Neal's 'Away Team' comes up with a deeply-rooted reason for Riker's aversion to Picard's beaming down on occasion, a reason which Riker himself is unaware of until the Enterprise makes first contact with a new race. Riker, unable to explain his determination to flaunt Starfleet orders, ends up relieved of duty while Picard, Troi and Pulaski try to discover the truth. Like its companions, this story is also very well written, but I had difficulty in believing that Picard would react as he did, especially since this story is set during the second season when he understands Riker more. Further into the story Picard regrets his initial reaction, but it still didn't ring true for me. However, the tale is nicely resolved and rounds off a zine well worth spending your credits on. [1]

... there are much worse zines out in the zine market. For example, CONTINUUM - not to be confused with Lois Welling's classic of the same name - is a ST:TNG zine that has typos in practically every sentence; pages of story with a block of text centered on a sheet of paper with large xerox black smudges above and below the type; illos that make CYGNET's art look comparable to the Old Masters; computer graphics used to fill pages; use of a typeface that placed the letters too close together to be readable in one story; and forget story ideas - what little existed have been handled by a writer truly juvenile in all senses of the word. Jean, read that zine for a true picture of rotten writing, true carelessness and fannish cynicism. [2] 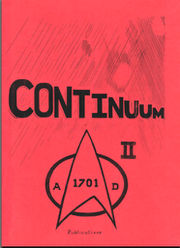 This is a TNG tine, 72 pages, containing 4 stories and a poem. The stories deal with: a powerful entity which must be returned to its home planet; how Lore came to be created, then deactivated; how Data acquired the hologram of Tasha; and a comedy story. The highlight of the zine is 'Lore', by Janet Lawn, a well planned and executed story that makes good use of the information given in the episode "Datalore" and fleshes it out to create an understanding of why both androids are as they are. We should hear more of this writer. The editor's name is not given, but I have two points to make. The pages are not numbered, which would be useful. Also, a little more attention to punctuation at the editing stage would be an excellent idea; I think it was Beth Hallam who remarked years ago that she wished to give all editors a work sheet on the use of the comma - and the apostrophe! Overall, however, I would recommend this zine for content- The stories have a freshness and are well written. The zine itself presents a readable, attractive appearance. I would also like to draw attention to the excellent illos by Janet Lawn. [3]

Continuum 3 was published in April 1990 and contains 94 pages. The art is by Tina White, Sharon White, and Sean Tobin. 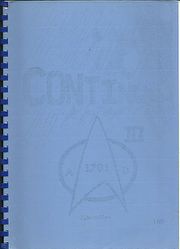 Continuum 5 was published in October 1991 and contains 72 pages. It contains no interior art. 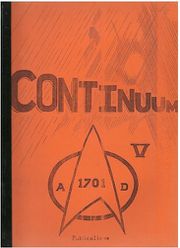 Continuum 6 was published in May 1993 and contains 114 pages. The single piece of art is by Wendy Holt. 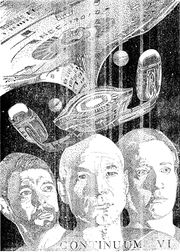 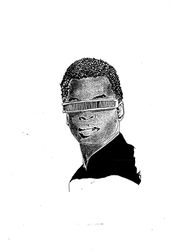