Penal Code is a slash Starsky and Hutch fanzine. 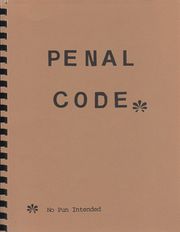 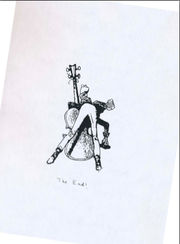 Penal Code 1 was published in October 1988 (at ZebraCon) and has 86 pages. On the cover, "No Pun Intended." The art is by Maureen B., J. Jones (two pieces by her are also in Don't Give Up On Us, Baby), Ruth Kurz, Suzan Lovett, Jean C. (back cover), and Debbie Sontag.

Below is a sampling of some of the zine's interior art. 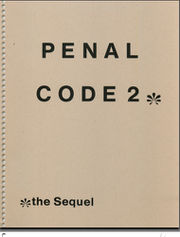 In a hand-written editorial, the publisher announced that she was leaving zine publishing:"My reasons are my own and it certainly isn't because of anyone else. If you've an overwhelming desire to know, come ask me, I'll tell you. Space prohibits here."

The only thing better about sex games is those fics where you don't really know who's who. Hutch is being picked up in a bar by a stranger after a domestic arguement. Sometimes you go out to find what you need. And it seems like the guy Hutch picked up can fit the bill just perfectly. Don't worry, the twist at the end makes up for any doubts you might have.[1]