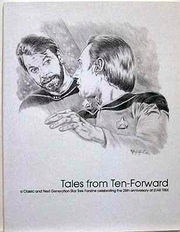 Tales from Ten-Forward is a 176-page gen Star Trek: TOS and TNG anthology.

From The Monthly: "What is Kirk doing on Picard's bridge, almost frantic about heading the Enterprise to someplace called Remelius? Choose your favorite reason from the stories concocted by the finalists in our ST 25th Anniversary Finish-the-Story-Contest. A reader ballot will dtermine the winner. We've got lots of other fiction, an article, some poetry, and nifty art, all G or PG rated. Work by Pillsbury, Dake, Lassiter, Kay, Chang, Haeberle, Sibeal, Bookman, Teeger, Summers, Frank and others."

From Bill Hupe's catalog: "It includes a classic mystery story by Sue Drake; McCoy is reunited with Kirk and Spock on the 1701D holodeck and many other stories."

Tales from Ten-Forward is an interesting collection of stories, both Classic and Next Generation oriented. The bulk of the zine is the result of a "finish the story" contest. The editor provided a 218-word beginning scenario. The four finalists were published, and readers encouraged to vote for the best story.

All of the finalists' entries were very well written. However, two really stand out. "One Last Time," by Lindsay Tice, is true to the characters. Retired Admiral McCoy returns to the Enterprise-D, but not for a tour. He uses the holodeck to reunite with Kirk and Spock via time travel. Unfortunately, things don't go right this time. Lindsay successfully captures McCoy's loneliness when he explains the situation to Picard. "I did more than just break the chain, I came out of retirement to do it. Yes, I know, why did I do it? When you get as old as I am, you lose more friends every day.. .You may think I'm a babbling old fool, but this is all part of the explanation. I've missed them both, Captain. I haven't much time left and I wanted to see them one last time." Turns out Q is behind the mishap, but he ends up being vulnerable in this case. However, the strength of "One Last Time" is Lindsay's characterization of McCoy. The other interesting story is "Nightmare on Elm Street XCI," by B.J. Mitchell. It's only one page long, but beautifully irreverent. The rest of Tales is comprised of several good pieces. The first story, "The Hybrid Murders" by Sue Dake, is a well thought out mystery, complete with map. Sue introduces an interesting new character, T'Layna. TXayna is a highly regarded pottery artist. She becomes in integral part of the story because she is the only victim of the Hybrid Murderer to survive. T'Layna survives because McCoy and Spock come to Vulcan to investigate the murders. McCoy offers medical advice that saves her life. Spock's interest comes after his half-sister is killed. The budding romance between Spock and T'Layna adds a nice twist to the mystery. However, the romance is introduced "logically," not thrown in for the heck of it. The reader won't be able to guess who's responsible right way, either. (Which is always good in a mystery story.) Another Sue Dake piece is "A Conversation About Grass." It's a conversation between Spock and Data. What makes it stand out is the physical layout the prose is written in screenplay form. One doesn't see this form very often in zines. Rounding out the zine is an essay, poetry, and a hurt/comfort tale. Sandy Bookman argues that Spock is the future's James Dean in "He's a Rebel." Personally, I think Spock's mellowed, but I don't see a leather jacket in his future. The hurt/comfort story (aptly named "An Old-Fashioned Hurt/Comfort Story") opened this reader's eyes. I used to think that hurt/comfort was just one step above slash. I stand corrected. It could've easily been a sappy tearjerker. But it's not. McCoy and Spock are hurt. Kirk runs himself ragged to save them. No ship or starbase within contact range. Sharon Pillsbury weaves a good story that gains the reader's sympathy, but doesn't insult their intelligence.

Overall, Tales From Ten-Forward is a quality fanzine. The layout is clear, laser printed, with clean binding. Of course, what counts are the words inside the cover. Tales stands out in that department also. [1]