"A feast for classic fans." 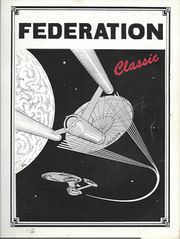 Federation Classic 1 is 144 pages and was published in March 1992. The cover is by David Lawrence. Other art by Lawrence, BEKi, Barbara Caldwell, and Chris Myers.

This is probably the most error-free zine I've ever read. I can't recall a single typo or other minor irritation. It's beautifully put together, with short quotes from the original series at the end of each of the six stories, a finishing touch I really enjoyed. Now, I'm sure you want to know a little about the stories. Well, let's see. The first one is titled "Shayla," by Deborah herself. "Shayla" is an uncomfortable sort of story. Spurred by recent events surrounding anti-abortion legislation in her home state, Baudoin carefully builds a believable background for, and explanation of, Christopher Pike's Number One. This is definitely not a feel-good story. Baudoin does an excellent job recreating the characters of Boyce and Number One, and there's a Tellarite I took a particular liking to, but I have to admit, even after several readings, I still don't like "Shayla." And, strange as it seems, that may be the very best tribute I can offer to the hard work and deep feelings that went into this story. I'd suggest "Shayla" to anyone who's feeling complacent about how far women have come in the last hundred or so years. A refresher course in what motivated women like Elizabeth Gady Stanton and Susan B. Anthony wouldn't be a bad idea either.

On the lighter side, there's "A Little Kindness Goes A Long Way" by Sadie Maxwell. The blurb on the flyer calls it "...a comic account of a day when James T. Kirk should have stayed in bed." Believe it I loved this one. In fact, I wish it had been longer. Looking for a little romance? You'll find it in "Passion's Price" by J. Karen Huff. It's a sequel to the animated episode, "Mudd's Passion," and is sure to fit the bill for all those Ghapelphiles out there. Be warned though, the quote that follows this one is comprised of Spock's words to Storm after the kal-i-fee. For those who can't keep track of every line in original Trek, what he said was this: "After a time, you may find that having is not so pleasant a thing, after all, as wanting..." Hmmm. How do you like them apples? The final three stories are all by Chris Dickenson. Having said that, perhaps I shouldn't bother saying any more. However, for those of you who are curious, I'll tell you a little bit about them. The first is a Sybok story, or rather a vignette, titled "And Gain Strength from the Sharing." It shows a side of Sybok we haven't seen before. This is the first piece I've read that managed to evoke any sympathetic feelings on my part toward that ill-guided Vulcan, which says volumes about Chris Dickenson's abilities. The next story is "By Virtue Fall." It's a STVI story that should please(?) those of us who were disturbed by the forced meld between Spock and Valeris. I still feel twinges of discomfort at the thought of Spock forcing a meld, but Dickenson's story has done much to answer "why." The last story is called, fittingly, "Finale." It's about Sarek and Amanda, and, incidentally, Spock. It answers, with an aching beauty, some of the questions left in our minds after the Next Generation eliminated their love story in a matter of words. "Finale" is, as Dickenson intended it, a more than fitting tribute to the man who was called "The Great Bird of the Galaxy."

All in all, I'd say that Federation Classic is more than worth the ten dollar price tag. [1]

cover of issue #2, by David Lawrence