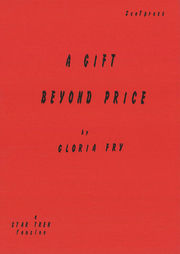 A Gift Beyond Price is a gen (some would say fairly slashy) Star Trek: TOS novel by Gloria Fry. It was published in April 1991 and has 69 pages.

Summary from the author's page: Kirk struggles with his new command, his dealings with his Vulcan first officer, and with a difficult Gary Mitchell who had expected to be second in command.

Kirk's early days on Enterprise, getting to know Spock. Parts of the story quite good; unfortunately the overall effect is spoiled by gooey sentimentality and Kirk's endless harping on his special (ack! the fatal word!) friendship with Spock - as if it were something he could decide upon rather than allow to grow organically. Also, Gary, who starts out as a pretty interesting character here, keeps turning into lovesick jelly when confronted with Kirk's anger. Some good plot points, though, including escalating conflicts with Gary, first over his sexual harassment of a yeoman, then over his response of disgust to a first-contact situation. And, a pretty good scene of Spock keeping Kirk alive after an encounter with a nasty, man-eating, flying race. Unfortunately, one of the villains, viewing the friendship of the human and Vulcan, decides instantly to change his society. Sheesh. Has an interesting view that Spock has healing powers he does not really control, himself, and that there is a friendship "bond" that forms spontaneously - sending the boys into further paroxysms of icky joy. Oh, well. Entertaining despite the heavy smarm pollution. [1]

This zine involves Kirk taking command of the Enterprise on its first mission. Gary Mitchell, Kirk's friend, is hoping to be First Officer, but Captain Pike has recommended Spock. Mitchell doesn't know about this as he has been ill. He comes on board expecting to be First Officer but Kirk has to have a word with him. Mitchell is furious about it and tries to cause trouble, Kirk tolerates him for a long while then decides he has had enough, so he puts him in the brig to cool off. Kirk is injured and in sick bay and Gary comes in while Spock is there and causes an emotional scene, which Spock finds distasteful. After a while they have to beam down on a mission, Kirk is injured (what, again!) and Spock helps him, When they get back to the Enterprise he asks Spock to call him Jim when they are off duty but Spock can't brink himself to call him Jim. Whether or not he does eventually... buy the zine and you will find out - the ending is lovely. It's not a very long £ine, but worth the money.[2]

A Gift Beyond Price, my favorite [of the series], Kirk is the newly-appointed captain of the Enterprise and must pick a first officer. He has to decide between Spock and Gary Mitchell, who is jealous over Kirk's growing interest in Spock.[3]

One of my most favorite novel-series isn't at first glance detectable as such, since each title in the series is different. The Classic Trek genzines are: A Gift Beyond Price, which is followed by A Kindred Spirit, which in turn is followed by Chosen Brother, all by Gloria Fry. Although they follow each other in chronological order, each is self-sustaining and they can be read in any order.

My favorite zine in the series is A Gift Beyond Price. It is so very well written and it passes my "reread" requirement that determines my favorite zine. Kirk is newly promoted to the Enterprise. He has requested his "good friend" (who in the past has saved Kirk's life), Gary Mitchell, to be his first officer. But Starfleet overruled Kirk's wishes and went instead with Spock, whom Captain Pike recommended. Kirk is disappointed that Starfleet chose Spock, but he is determined to, as he tells Mitchell, "give [Spock] a fair trial". As the story progresses, Mitchell becomes more resentful and jealous toward Spock as it becomes evident that Kirk is learning to appreciate Spock's respect toward Kirk, range of knowledge, diplomacy (when confronting a new alien life form), problem-solving ability, and how Spock is "restrained by [a] noticeable arm of power which surrounds" him. In short, Kirk finds that he likes being in Spock's company—on duty and off duty. Kirk starts realizing how immature and disrespectful Mitchell is toward Kirk and Kirk's position. (One thing I really liked about this zine was how the characters speak "realistically"— for the most part; another thing I liked was the lack of "filler." (If I were to edit the zine, I wouldn't take out any single scene!) Toward the later part of the novel, the Enterprise is sent to investigate why a Vulcan survey team has been out of contact with the Federation for over a year. The landing party finds carnivorous predators—and guess who gets to be the next meal? Spock helps Kirk survive on the planet until they can return to the Enterprise. At the end, both Kirk and Spock realize that a bond of friendship has formed between them.

The only character who seems oddly portrayed is McCoy. In each zine, McCoy doesn't want to understand Spock or get to know him. McCoy is so negative about Spock, almost distrustful. Where is the observant, perceptive doctor we are used to? The author seems to use McCoy primarily as a presenter of such negative opinions of Spock that Kirk feels compelled to say something in defense. I do like how Kirk realizes how shallow Mitchell's friendship is. Just by watching Spock act in his normal, respectful, intelligent, insightful way, Kirk can see the contrast between Spock and Mitchell.[4]