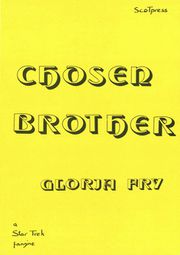 It is the last part of the Gift Beyond Price Trilogy:

Summary from the author's page: After Mitchell's death at the galactic barrier, Kirk struggles to cope. A lovely woman comes aboard and the situation deteriorates further.

Chosen Brother, takes place after Mitchell's death. Kirk has difficulty trying to deal with his grief and guilt and Spock is unsure how to handle the situation. In the midst of this, Kirk is caught up in a love affair with a rescued passenger. Sexual situations, but no explicit sex and none whatsoever between Kirk and Spock. There's male/female and a little Mitchell trying to get Kirk. Spock and Kirk's relationship is one of trying to understand each other and developing brotherhood. Dr. McCoy and Spock have some conflict in it too, although it ends well.... I like her Spock characterization. It shows his alienness, which is a pleasant switch from some that make him too human. [1]

One of my most favorite novel-series isn't at first glance detectable as such, since each title in the series is different. The Classic Trek genzines are: A Gift Beyond Price, which is followed by A Kindred Spirit, which in turn is followed by Chosen Brother, all by Gloria Fry. Although they follow each other in chronological order, each is self-sustaining and they can be read in any order....

Chosen Brother is the last sequel written, printed in 1992. The story deals with Kirk having to overcome his feelings of guilt over Gary Mitchell's death. This story is set after the TV episode "Where No Man Has Gone Before." The Enterprise encounters a Spican Cruiser with one life-form whom they discover is "the most beautiful woman Kirk has ever seen," who turns out to not be as she seems. They later encounter a commander of a war fleet that is determined to "conquer" lesser species and want to expand their territory. However, the real story is how Spock and McCoy can see how upset Kirk is after Mitchell's death, but Kirk doesn't want to draw anyone into his pain so he refuses all attempts to help him. In the end, Spock is able to convince Kirk that he can help Kirk if only Kirk will trust him with a mind-link. There's also other ship-related activities going on and other touches that complete the story. Gloria Fry has such a nice fluid way of writing that everything pretty much flows together. There's very little wasted space, and she weaves details, like Kirk's post-Mitchell's-death nightmares into the story—giving a most satisfactory result to the reader. I suppose it's a minor point, but I do enjoy reading from left to right on the whole page. I have gotten used to reading double columns. But it is nice to read long lines— perhaps it creates a greater "intimacy" with the words— because it's more like a letter, than a book?

These are ScoTpress zines and as such, have their stamp of consistently good editing and proofreading. Some other zines I've read have so many typos that it's almost a chore to read them! At the end of Chosen Brother, McCoy seems to be changing a little—starting to have a little respect for Spock. [2]

Kirk, agonizing over Gary Mitchell's death in "Where No Man Has Gone Before" and refusing to unburden himself to either McCoy or Spock, becomes obsessively infatuated with a woman they rescue from suspended animation in a damaged ship. After she is revealed to be a malevolent entity seeking to control Kirk's mind to take over the ship, and defeated with Spock's help, Kirk finally allows Spock to heal him. Basic H/C, with lots of angst and expressions of undying devotion. [3]