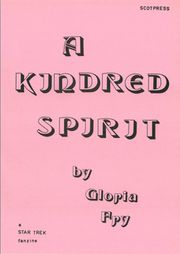 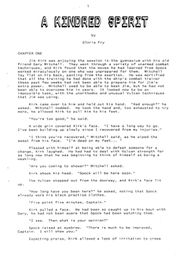 A Kindred Spirit is a gen Star Trek: TOS novel by Gloria Fry. It was published August 1991 and has 75 pages. It is the second part of the Gift Beyond Price Trilogy:

Summary from the author's page: This continues the events in Gift Beyond Price. Along with many other problems, a powerful alien being causes havoc.

Kindred Spirit, continues with a closer relationship developing between Kirk and Spock as Kirk tries to learn Vulcan physical and mental techniques from a strict teacher, Spock. Mitchell gets more jealous and it seems he desires a sexual relationship with Kirk, who wants no part of it.[1]

One of my most favorite novel-series isn't at first glance detectable as such, since each title in the series is different. The Classic Trek genzines are: A Gift Beyond Price, which is followed by A Kindred Spirit, which in turn is followed by Chosen Brother, all by Gloria Fry. Although they follow each other in chronological order, each is self-sustaining and they can be read in any order....

The second zine in the series, A Kindred Spirit, seems the most disjointed, character-wise. It still has the wonderful way the characters speak, but the chapters do not fit in well together. Chapter five was, I felt, totally unnecessary to the plot. It concerns a flashback Kirk has to when he was sixteen and had just gained admission to Starfleet Academy. Kirk was put in seventeen-year-old Gary Mitchell's charge (Mitchell was repeating his first year at the Academy). Mitchell tries to rape Kirk but Kirk pleads with him to stop, which he does. The next day (this I don't understand at all), after Kirk thanks Mitchell for not doing what Mitchell "obviously wanted to"..."Gary felt a wave of affection for him.. .apologized again, and from then on they had become fast friends." Come again?!? Somehow, the Jim Kirk character, as I see it, may possibly not hold a grudge, but I don't feel that he would encourage a friendship with Mitchell after the attempted rape. Of course, authors have the right to have their characters feel/act any way the writers want, but I, as the reader, could not seem to get over this inconsistency.

Most of the novel is concerned with Kirk, Spock and Mitchell (the only survivors of a landing party) on a Class M (of course) planet dealing with a powerful (is there any other kind in the ST world?) alien that turns people into (this sounds like a bad sci-fi movie) "zombies—re-animated corpses." Another infamous Kirk-bluff saves the day, but Spock is coma-like. Kirk is able to draw Spock's consciousness out of the coma (in -a very nicely written scene). All in all, I thoughts Kindred Spirit was pretty well written—I kept wanting to go on to the next page! (The rape part, though, was unnecessary to the story— just sort of thrown in.) [2]