Nightmare Road is a slash K/S 174-page novel by Patricia Laurie Stephens. Illustrated by Alexandra Vincent. It is a Special Edition of Twilight Trek. 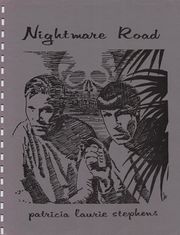 From The Monthly: "An alternate universe novel where the Empire rules and the S'Kandari Warrior Tradition has survived as an elite group of professional 'protectors'. Spock, member of this select crew, meets young Imperial Starfleet officer James T. Kirk for the first time when he is assigned to rescue him from an impregnable island owned by a wealthy corrupt outlaw. With his mission accomplished, however, Spock's ordeal has only just begun."

From Gilda F: "From Vulcan warrior to Protector for hire, Spock is almost killed and then his next assignment is to rescue a young Starfleet officer being held prisoner, who turns out to be only one of two life-altering surprises."

It is to the author's credit that the reader doesn't come to that conclusion until the very end. The novel has a crisp pace, great descriptions, and a tightly woven plot. It grasps the reader's interest immediately and keeps it throughout.

The implausibility of the ending is in keeping with the Twilight Zone tradition. All in all, I'd say it was worth the money. [1]

This novel takes place in a universe only a few centimeters to one side of the prime Star Trek universe. The Empire rules the galaxy, the S'Kandari Warrior Tradition has survived into the 23rd century, and Spock is one of the elite professionals of the Warriors. He is assigned to rescue Imperial Starfleet officer James Kirk, who has been abducted by Andropol, a powerful, corrupt, and sadistic underworld boss, and is imprisoned on a supposedly impregnable island. Spock has recently recovered from a disasterous mission during which his Vulcan partner and childhood friend Sakir was killed in a particularly grisly manner; he is still plagued by nightmares about it. During Kirk's rescue and subsequent flight from Andropol's hired assassins, clues began to unravel a mystery leading back into the past -- straight to the failed mission which is the source of Spock's nightmares. When Spock's 'dead' partner turns up, with identical memories of a massive ongoing plot to overthrown the government of Vulcan -- and ultimately developing their own relationship in the midst of chaos. 'Nightmare Road' is tightly written and suspenseful, with a surprise plot twist at the end that won't be soon forgotten by anyone who reads it. I don't usually like AU stories, but I couldn't put this one down. Well worth your time and money. [2]

This was the most absorbing novels I've read in recent memory. It drew me in from the first scene and didn't let up until after the final climax. All the various sub- branches of the primary mystery were clearly presented and I found ayself amazed at the plotting. There wasn't a single wasted word nor any idea left hanging. The descriptions were detailed enough to make the story easy to imagine; yet the narrative moved things along quickly. The feeling of "being there" was very strong, especially near the beginning when Spock was trying to breach Andropol's property. I also appreciated that major plot twists were revealed to the reader throughout the story, yet everything doesn't come together until the very end. The characters of Spock and Sakir behaved in a consistent manner. However, even as for as a/u stories go, I wasn't sure who Spock was. He was a Vulcan/human hybrid, considered himself Vulcan, studied with Vulcan warriors, and yet he behaved and spoke in a human, almost casual manner. I found it puzzling and think I would have accepted him more easily if there had been some explanation — say, a rejection of Vulcan adherence to logic -- that would have accounted for him being so different from the Spock of mainline Trek. Also, I found Kirk to be different than I would perceive him in any universe. I couldn't quite accept him voicing so easily his desire to have Spock 'protect' him; I think his pride would prevent his expressing such desires. Nevertheless, since his presence was actually a minor part of the story, his 'off characterization wasn't as distracting as Spock's. [3]

Nightmare Road (a special issue of Twilight Trek) by Patricia Laurie Stephens, published by Jean Hinson. Yes, this is a K/S novel. But it's one hell of a read. The author doesn't pull any punches and we wind up with a roller-coaster ride for a novel that just can't be put down. Extremely well-written and presented, it certainly has my vote for the best new novel last year. Twilight Trek itself is certainly nothing to sneeze at, either, with its "Twilight Zone meets Star Trek" flavor. [4]