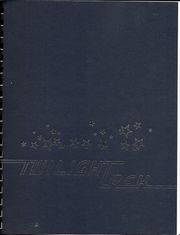 cover of issue #1, black with gold or silver stars and lettering

Twilight Trek is a slash K/S and gen Star Trek: TOS anthology devoted to the strange, the eerie, the unexpected.

Nightmare Road is a Special Edition of Twilight Trek.

About a Possible Third Issue

From an ebay seller in 2007: "This novel [(Trusting the Spirit)] started out as a novelette that was meant for the 3rd in the wonderful TWILIGHT TREK series (Trek meets the TWILIGHT ZONE). Sadly, TT2 was the last, but the author listened to Kirk & Spock, and the story grew into a novella, then a novel, then quite a long novel."

Twilight Trek 1 was published in 1990, is 163 pages long and contains 4 stories, plus many poems and illustrations. It has art by Alexandra Vincent.

See reactions and reviews for The Stranger. 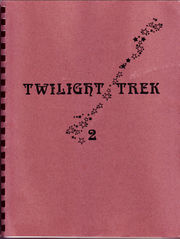 Twilight Trek 2 was published in 1992 and contains 170 pages. A summary from Hupe: "Young Jim Kirk's life is saved on Vulcan in a harrowing dert adventure, but all is not as it appears to be; a forced leave on Vulcan, a trip to an archaeological dig, and an encounter with a very strange old Vulcan, and Kirk and Spock will never be the same; more."

See reactions and reviews for Off the Beaten Trek.

See reactions and reviews for Candles in the Wind.