You may be looking for the zine Star Trek zine Stardust. 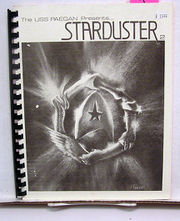 Starduster is a gen Star Trek club zine. There are at least three issues. All fiction focuses on the Star Trek universe and OMCs.

Starduster 2 was published in 1989 and contains 178 pages, 28 stories and poems It has a front cover by Phred.

Starduster 3 is subtitled, "The Swimsuit Edition." It contains over 200 pages of artwork, stories, poems, limericks, puzzles and surprises.

From an article written in issue #58 of the Starfleet Communique: "Starduster 2 won all Region 02 competitions for best story, best artist, best cover, and more. Starduster 2 was banned for the competition it, too, would have won all awards. Starduster 4 is currently in production and it is expected by the end of the year. Starduster features art and fiction about the Paegan and its unique crew." (1993)[1]

I recently picked up a copy of Starduster: The Swimsuit Edition at a recent Vulcon (a semi-annual ST convention in Florida). This zine is the third put out by the U.S.S. Paegan, a Starfleet chapter in Orlando, Florida. Like all their zines, the stories are basically about the persona of the club's membership. Kirk, Spock and McCoy and the rest of the people seen in the show are not here. On the other hand, there are none of the "Mary Sue" stories that show up in club fanzines so frequently. The stories, poems and comics are heavy on humor and having fun with the idea of a shipful of different aliens trying to live in peace together. The art is very good, especially a bunch of group drawings about the crew's trip to a beach (and you thought that Kirk's, Spock's and McCoy's camping trip was funny). My favorite story has got to be "The Wizard of Ooooohs and Aaaaahs" by Debbie Joseph and Larry Jarrell. This is a comic book version of a Star Trek/Wizard of Oz story that is worth the price of the entire zine. I'm partial to takeoffs, and there are some good action/adventure stories, especially one about an all-night poker game in the ship's lounge, called "Double-Handed Wild Weasel Joker Poker." There are also some puzzles and information about the club. In all, it was a good zine, but the fact that I know most of the people in it helped me understand more of the inside jokes than others might. The zine is certainly aimed at their own membership, barring that the membership of Starfleet and then the general fan. [1]