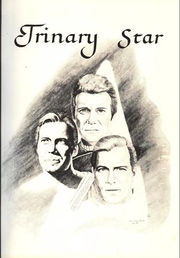 Trinary Star is a gen Star Trek: TOS 172-page anthology of stories written by Diana King. The cover art is by Anne-Marie Smith.

From IDIC #9: "McCoy, newly assigned to the Enterprise, finds its young Captain deeply troubled over the death of his close friend; Kirk attempts to rescue a Romulan defector before Romulan agents can find and kill him; a youthful Kirk struggles to free himself from his father's shadow and establish his own identity."

From The Monthly: "Three Classic Trek stories by the author of DEATHDANCE and CAPTIVES. #1 weaves 4 1st-season episodes into a tale of McCoy's early days on the Enterprise. In #2, Kirk's special assignment ends in disaster -- or does it?. #3 offers speculation about Kirk's future."

Every once in a while, a truly excellent zine comes along, and Diana King's 'Trinary Star' is exactly that. This zine -- not a K/S zine, by the way -contains some of the best writing I've seen in quite some time. It consists of three stories which explore the character of James T. Kirk, in the context of his work and relationships, at three different stages in his life. [1]

This zine consists of three stories by Diana King. Known to many zine buyers is the writer of Deathdance and Captives, Diana has been working on the stories in this zine since 1983. In Consoler of the Mind, McCoy, newly appointed to the Enterprise, realises that Kirk is not coming to terms with Gary Mitchell's death; however, it takes him - in effect - five episodes to find the correct switch that will persuade Kirk to talk to him about what happened. O for a Thousand Tongues involves the attempted rescue of a Romulan defector who can only speak his own language. Kirk's contact is ill; but the ship is acting as a taxi for three Olmerids - a race with a positive gift for learning foreign languages.

The third story, Better Strangers, involves the attempts of a young J T Kirk to free himself from his father's image - something not easily accomplished, for Kirk Junior is actually a clone of James T, and everyone expects him to have the same abilities and aspirations. But he doesn't.

Let me begin at the end and work forward. For me, the last story, which is also the shortest, was the weakest of the three. The idea is interesting but I didn't find it convincing. I don't like stories about Kirk's (Spock's or whoever's) offspring, but I think I would have found it more convincing - without, any other alterations - if Jason had been an ordinary son, not a clone. O for a Thousand Tongues is interesting and well done. The situation is well drawn and the problems Kirk faces in his attempts to rescue Taricus are well handled. Consoler of the Mind is, for me, definitely the best story in the zine and is brilliantly handled. Diana links the first five episodes of Star Trek without going into unnecessary details about the five stories. She concentrates on building up the relationship between Kirk and McCoy slowly and convincingly, uses the other characters equally convincingly and ends up with an interesting and well-developed story.

This zine is, in my opinion, well worth getting. [2]

Trinary Star, as the name implies, is a collection of three stories, each taking place at a different point in Kirk's life, and each with either an introduction, afterword, or both. What a methodical writer Diana is. In the first story, "Consoler of the Mind," she ties together several first season episodes, filling in details of Kirk's relationship with Gary Mitchell, the emotional trauma Mitchell's death brings, and Kirk's early relationships with Spock and McCoy.

The second story, "O, For a Thousand Tongues," is more of an action story, with Kirk once more going it on his own. In this one, Diana plays around with the illogic of everyone, irregardless of race, species, etc., being fully capable of talking to everyone else. She also invents the holodeck long before TNG, and maybe more believably. This one was my least favorite of the three, but only because the other two were my most favorites. (Yes, and that sentence smacks of illogic, too!)

The final story, "Better Strangers," shows a future Kirk and his relationship with his son. I'm not going to tell too much about this one. I will say it's quite unique in my experience with Trek fiction, and more important, it left me thinking. I can't think of a higher compliment.

All in all, I can't say how highly impressed I am with Trinary Star. Not just the stories, but the evidence of all the care and hard work that went into them. If every zine were put together like this, there would be no need for T3! You could pick up any zine and be assured of a satisfying read. [3]