Tantalus is a gen Star Trek: TOS and Star Trek: TNG anthology fanzine published by Orion Press and edited by Ann Zewen. It was first published in September 1990 and ran for eight issues until 1995.

The odd numbers of Tantalus were TNG zines, the even numbered issues TOS zines.

In June 1999 TOS stories from previous Tantalus issues were reprinted in a Tantalus Revisited anthology.

Features stories concerning death, serious injury, and/or emotional trauma as it affects one or more of the regular characters... The mainstay of this zine is the type of story traditionally known as 'hurt/comfort' or 'get (whomever)' stories. Also the place for alternate universe and alternate ending stories. It is the darker side of Star Trek. [1] 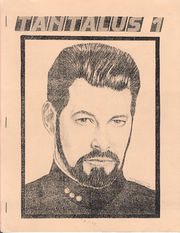 Tantalus 1 is a TNG zine and was published in September 1990. It contains 174 pages and five stories. Art by Steven Dixon, Christine Myers, and Julie Nosal. 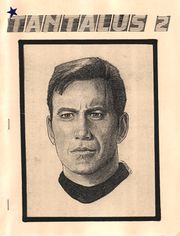 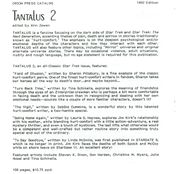 Tantalus is a hurt/comfort zine that alternates original Star Trek and Star Trek: The Next Generation material in each issue. It focuses on the darker side of Trek, featuring themes of loss, pain and death. Its aim, in the words of editor, Ann Zewen, is to "explore the deepest emotional conflicts a human (or Vulcan) can experience". Tantalus 2 features our original heroes, Kirk, Spock and McCoy... Tantalus 2 is a classic "read em and weep" zine. It is necessary to walk a fine line in this genre and two of the stories succeed admirably. "The Vigil" by Debbie Cummins is a powerful tale of Kirk and McCoy's last vigil over a comatose Spock. Each of them share their pain and regrets over things left unsaid. It contains a haunting scene of Spock's childhood, 'the day the cats disappeared', that lingers with you long after the story is over. 'To Say Goodbye" by talented veteran Linda Mclnnis, has Kirk attempting to say a final goodbye to both Spock and McCoy who were killed on landing party duty. The innovative addition of another Starfleet officer confronting a similar loss lifts 'Goodbye' above average. This story rang truest for me. Barbara, the other officer, doesn't have any pat answers, nor does she sail away into the sunset with Kirk at the end of the story. Instead they struggle and suffer together as they eventually reach peace with their memories. The other three stories in Tantalus 2 are readable, although "Field of Illusions" by Sharon Pillsbury is too emotional and choppy. Kirk and Spock are almost unbearably gushy and over-wrought as they fight to survive Kirk's bout with Rigellian fever. It did, however, contain my favorite scene in the zine as Spock impishly makes a Vulcan snowman, complete with pointy ears to surprise Kirk. 'Turn Back Time" by Tina Schiella takes a slightly different twist as it focuses on Security officer Jenna Carter who comes close to death before she can repair a broken friendship. "Going Home Again" by Laurie D. Haynes has a little bit of everything (hurt, danger, mystery, and a dash of the supernatural) as Kirk faces danger home on the farm. Tantalus 2 is a welcome addition to the hurt/comfort genre. I enjoyed the excellent art of Christine M. Myers, especially an intriguing portrait of George and Sam Kirk comforting a stricken James Kirk in "Going Home Again." Julie Nosal renders the front and back cover portraits - a fairly routine rendition of Kirk on the front and a marvelously wicked "Mirror" Sulu on the back. I would like to have seen a little more creativity on some of the other artwork but generally it was well done. The layout is stark and the black-edged border hints of dark deeds to come. Tantalus 2 is available from Orion Press. They have years of experience in producing quality zines. I give Tantalus 2 a slightly above average overall review score of 60 points out of 100. This breaks down to 18 points for writing, most of this for the strong, polished prose of Cummins and McInnis), 12 points for artwork, 15 for the overall presentation of the zine (which included both opening and closing remarks from the editor, which I greatly enjoyed), and 15 points for the ultimate value of the zine, given the reasonable price. Hurt/comfort zines are not for everybody. I am more of an action/adventure fan myself and tended to skim quickly over some of the angst and anguish. But if you are in the mood to curl up with a box of tissues and have a good cry, Tantalus 2 could be the zine for you. [2]

First, let me say I personally do not like death of Kirk or Spock stories. Being in nursing, I have quite enough "reality" without having it forced on me in my fantasy world. So, be prepared if you read Tantalus 2. The stories I liked, however, were "Going Home Again" by Laurie Haynes about Kirk, Spock, and McCoy involved in mysterious occurrences in Kirk's home town, "Field of Illusion" by Sharon Pillsbury, a Kirk sick/Spock comfort story and 'Turn Back Time" about two girls on the Enterprise who are aided by McCoy with their personal problems. [3] 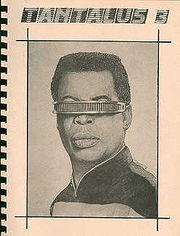 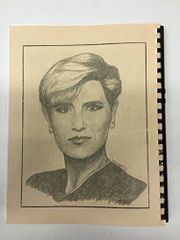 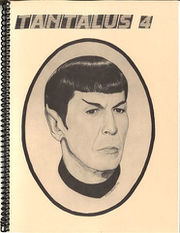 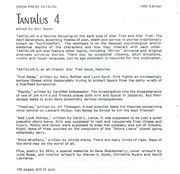 Tantalus 4 is a TOS zine and was published in April 1992. Art by Steven Dixon, David Lawrence, Christine M. Myers, and Julie Nosal (front and back covers) 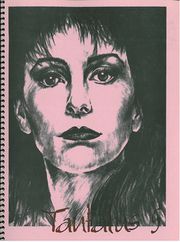 Tantalus 5 is a TNG zine and was published in January 1993. It contains 152 pages and seven stories.

According to Orion Press, the Tantalus zine series features the darker side or ST with an emphasis on pain, death and grief and some alternate universe fiction. Odd numbered zines are TNG, even numbers are OT. Both Sides of the Mirror bv BEKi is the longest and most complicated story and stars Riker as he crosses over to the parallel universe seen in the CT episode Mirror Mirror. The Commander finds himself surrounded by enemies, Beverly has been systematically poisoning him and although Troi is still his Imzadi she cannot be trusted. Meanwhile, in our universe, Beverly is told how an alternate Picard murdered her husband and arranged tor Riker to kill her son, and Ro is shocked by Rita's ability to release her procreant hormone, a scene which would indicate that this story is set before Conundrum. This story is very well paced and the characterisation is spot on. The Mirror universe bears a striking similarity to that seen in Diane Duane's novel Dark Mirror, which only goes to show that great minds think alike in fandom.

Gifts of Love and Light by Brenda Shaffer is a much shorter story featuring a missing scene from Final Mission. Picard is dying and while Wesley is looking for water, Jack Crusher comes to visit his oldest and dearest friend. Jean-Luc is ready to go with him but Jack convinces him that he must stay alive because there are people who need him. I loved this poignant story, but then I'm a sucker for Jean-Luc.

Prisoners of Protocol by Cyndi Bayless Overstreet is a story of political intrigue and the Prime Directive in which both Riker and Data get ihe chance to prove they are "fully functional'. Overstreet has a nice easy style and her genuine affection and respect tor Data are well illustrated here.

Bleeding Heart by Ambassador & Showers. Q wants to break Picard and pierce his sou! so he disguises himself as a miraculously resurrected Jack Crusher and watches Jean-Luc, Wes and Beverly suffer. Troi has him sussed though.

Power Play by Mindi French is another AU: story which is so skillfully written that the reader is not sure whose side to be on - Riker's or Picard's. Contains some adult scenes.

A Time to Heal by D.J. Nicholson. Jean-Luc is seriously injured and blinded in a shuttle accident. As Beverly struggles to keep him alive he reveals his guilt over the death of his sister.

Playthings of the Mind by Janna Stockinger. This is another long story and I must say it was probably my least favourite. Set in the first season, the Enterprise crew encounters an alien mind which transports most of the bridge crew to a place where thought becomes a very warped reality. Tasha is back on her home planet, Riker and Worf are killed in battle and Troi blames the Captain. Meanwhile Beverly and Jean-Luc stand over Jack's coffin. Data has to figure out a way to get everyone back to reality. This story seemed to draw heavily on themes seen in Where No Man Has Gone Before and I felt the whole thing a bit unsatisfactory. 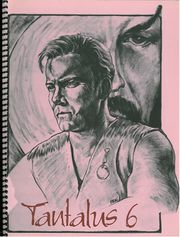 cover of issue #6, BEKi, also used as the cover later of "Tantalus Revisited"

Tantalus 6 is a TOS zine and was published in May 1993 and contains 112 pages. The cover is by BEKi. Art & illustrations by Toni Hardeman, Christine M. Myers, Sherry Veltkamp.

Tantalus 7 is a TNG zine and was published in October 1994, contains 172 pages and nine stories and poems. 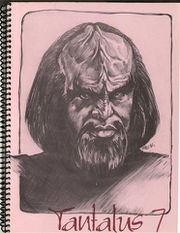 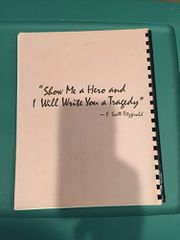 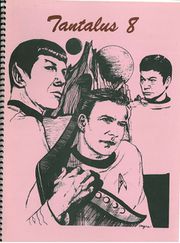 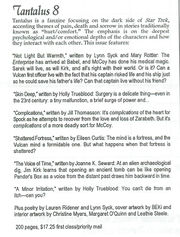 Tantalus 8 is a TOS zine and was published in January 1995. It contains 190 pages. The cover is by BEKi. Art & illustrations by Christine Myers, Margaret O'Quinn and Steele.

cover Tantalus Revisited, cover by BEKi, also used as the cover of issue #6

Tantalus Revisited is a digest-sized TOS anthology that was published in June 1999 and contains reprints from previous issues. It has 196 pages and is spiral bound. The stories from Tantalus Revisited are also available as an online collection.[7] 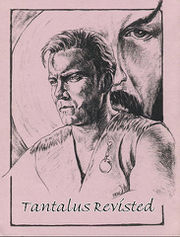 another version of the cover with the title