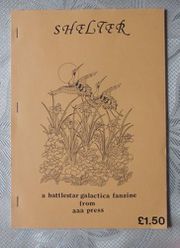 Shelter is a gen 50-page novella by J.A. Mortimore.

Summary: "The discovery of a seeming paradise planet behind a natural magnetic cloud brings inevitable calls from the Coucil of the Twelve for the Galactica to end its flight and allow the weary mambers of the Fleet to settle in a new home. Despite Adama's misgivings, things go well until an exploration mission to a heavily-forested area of the planet leaves Starbuck seriously injured and Apollo missing, presumed dead. Just what are Shelter's hidden secrets and how can the Colonials survive the massive Cylon task force preparing to attack?"