Nothing to Hide is a slash 261-page multifandom anthology published in Hainburg, Hesen, Germany. The fanzine won the 1998 Stiffie Award for Best Multimedia Zine and numerous stories also won awards. 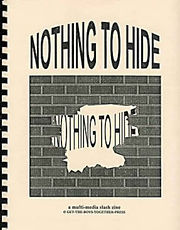 It has a sister zine called Even Less to Hide.

It required an age statement to order: "NOTHING TO HIDE contains same-sex, adult-oriented material and requires an age statement upon order, and will not knowingly be supplied to persons under 18 in Australia and Europe, and 21 years in the USA/Canada."

From the zine: "A word from the publisher: I'd like to end this zine by sincerely thanking you for buying my first ever slash zine. I'd also like to thank some other very important people: My deepest thanks go to my loving and supportive husband Alexander. Special thanks also to my beloved friends Petra, Kerstin, Alex and Bine. Without them, this zine surely wouldn't have been published. Best wishes from Germany, Mona."

The zine has no table of contents.

The color KOZ illo is numbered and appears after the zine cover.

Most of the art appears to be by Anja Gruber.

One illo is by Kath (possibly Kath Moonshine).

One illo is by Bine.

All of the art is uncredited.

See reactions and reviews for Keep on Truckin'.

[zine]: Quite possibly the best multi-media slash zine in existance! Most m-m zines annoy me, since often there will be ten stories in a zine from wildly divergent fandoms, varying widely in quality. Usually there will be only one story I'm remotely interested in - sort of a waste of money, it feels like. Now, *this* zine has *30* stories, all of them marvelous, from well-known Slash authors like Arduinna Finn, T'mar, Elizabeth Holden, Anne Higgins, Flamingo, Elessar, Brenda Antrim, Lianne Burwell, Jennifer Lyon, Jane Mailander, Maiden Wyoming, Richel Darrah, and Amanda Warrington (reads like a who's-who of Slash fandom, doesn't it?), to new authors with whom I'm most impressed! There are 16 different fandoms represented, with a few xovers and A/Us. There *are* 8 'Professionals' stories, but the rest are rather balanced. Oh, and some amazing artwork in this, too! An absolutely exquisite zine! [1]

[zine]: This is simply one of the *best* multimedia slash zines I ever read.

NtH has a multitude of stories from a wide range of fandoms, everything from MASH and Big Valley to X-files, OAT, Starsky /Users/lizabethngockel/Desktop/Screen Shot 2018-08-23 at 2.23.08 PM.pngand Hutch, Sentinel, I could go on and on. It even has a marvelous Pros/ST:TOS crossover. Includes such authors as Richel Darrah, Lianne Burwell, Jane Mailander, Cassandra, Anne Higgens, Flamingo... This is one zine I consistently press upon anyone and everyone who asks me about zines.