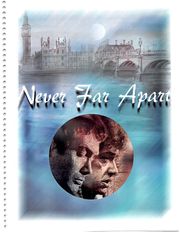 Not counting reprints, the majority of the zines on this list are pre-Internet fandom. That’s not a coincidence, as I find most zines in the ‘net era to be far less interesting than their predecessors, both in quality of content and in visual appeal. This meticulously produced zine is one of the exceptions. This editor polished and spit-shined this zine within an inch of its life, resulting in a volume that holds it own with the best this fandom has produced, and outshining the majority of modern competitors in any fandom. [2]

Never Far Apart 1 was published in May 2007 and contains 208 pages. The color cover and inside art is by Suzan Lovett.

Story descriptions from the flyer:

"Love and Bullets" by Elizabeth Holden: Bodie is shot, and Doyle spends the hours in his hospital room contemplating his recent epiphany and pondering his options for dealing with his increasingly difficult-to-ignore feelings for his partner.

"The Strongest Will" by PFL: High on adrenaline in the aftermath of Mixed Doubles, Bodie makes an impulsive decision that irrevocably alters the course of his relationship with Doyle. Before they can deal with the consequences, they are faced with a difficult assignment that sends Doyle undercover. Bodie will do whatever it takes to sustain Doyle as he struggles with the moral ambiguities of CI5 and adjusts to the changes in their partnership, but as time passes he begins to fear that he and Doyle are further apart than ever.

"Never the Same Again" by Sally Fell: A casual night out becomes a disaster for Doyle when he discovers something he never suspected. This and another stunner delivered by Cowley soon after combine to upend some of Doyle's comfortable assumptions about the world, Bodie, and even himself. Dealing with the resulting turmoil leads to some surprising revelations for him and Bodie and changes their relationship forever.

"Raymond's Joy" by The Hag: Bodie and Doyle are on one of their fishing weekends, but true to form, the fish aren't biting, and neither are the barmaids. Still, the respectable performance of an aptly-named horse has Doyle feeling a little lucky and a little rash, and he makes a daring spur-of-the-moment decision that turns out to have more profound and far-reaching consequences than he or Bodie could have imagined. As a result of this apparent accident of fate, their lives change in ways they never expected as they gradually come to terms, together and separately, with some fundamental truths--not least that their fate seems to have been determined by a horse!

"Between Folly and Love" by Josey: Bodie's old mate Jimmy Keller, in military prison after Kickback, asks him for a favor. But things don't work out the way Keller, or Bodie, expect, and in the ensuing chaos, a disillusioned Bodie finds himself unmoored and questions his relationship with Doyle, while an exasperated Doyle works to save Bodie from himself--and Cowley!

"A Falling Off" by Callisto: After Fugitive, a bruised and battered Bodie shares a quiet evening with Doyle, and the two of them savor the sense of something growing between them. But before anything can come of it, a routine-seeming op takes a disastrous turn, and they find themselves almost--but not quite!--back where they started.

"Happy Endings" by P. R. Zed: Tired of the mercenary life, young Bodie returns to London to enjoy some rare leisure time while he contemplates his future. He meets Ray Doyle at a club one night, and sparks fly immediately. But their liaison takes a more serious turn when they discover Bodie has connections to a crime Doyle is working on, and their lives, and futures, become more intertwined than either could have imagined.

"Cold Comfort" by Lacey McBain: Cowley's plan for extricating Doyle from a dangerous undercover assignment goes disastrously awry, and what should have been a simple op becomes a struggle for survival. Watching Doyle's life hang in the balance motivates Bodie to reevaluate his priorities.

"Far Shore" by Angelfish: After a serious injury invalids him out of CI5, Doyle has moved to Scotland, where he is doing his best to make a new life for himself and forget his disastrous final months on the job--especially the unraveling of his partnership with Bodie. But then Bodie appears on his doorstep with ghosts of his own, and they must confront their pasts before they can attempt to build a future.

Issue 1: From the Editorial

I'm not sure when the seeds of the idea for this zine first planted themselves in my head, but 1 do remember when I knew I really was going to do it: at a Pros gathering at my place, when I nervously broached the subject and Suzan Lovett, in her usual unflappable way, said sure she'd be willing to illustrate. I figured that had to be a sign, and maybe it was time to commit myself to the project. Or to be committed, perhaps...

The only thing I was certain of from the beginning was that the stories would all be B/D slash. The name of the zine comes from Bodie and Doyle's exchange with Barry Martin's girlfriend in the episode Rogue. "Oh, it's you," she says unenthusiastically, when she opens her door and sees Doyle; "And you," as she turns and sees Bodie. "Never far apart," Doyle agrees, confirming what we all know already: they are together, on the screen and in our hearts—and within these pages. So while you'll find a wide variety of stories here, all feature a Bodie and Doyle who love one another (and all are set in the CI5 universe; there are no AUs). Beyond that, though, I had only the vaguest sense in my mind back then of what I wanted to do, much less of what editing and publishing a zine would ultimately entail. And as it turns out, what it mostly entails is... work. Lots and lots of work. I didn't realise how much time and sheer bloody effort it would take, how frustrated I'd get at times, or how many decisions I'd have to make—but nor did I anticipate how satisfying, and how fun, it would be, how much I'd love things like fiddling with layout, reading books about typesetting, and most of all, working with authors. Ah, authors... the heart and soul of any zine, and my authors have heart and soul to spare. I would like to thank them all for their patience and dedication, and express my deep admiration and respect for their talent and commitment. It may go without saying, but I'll say it anyway: I couldn't have done this without you. Another thing I learned on this journey: it'd be virtually impossible to do something like this alone, and what's more, I wouldn't want to. My patient and long-suffering significant other deserves a medal for rising to the occasion, tolerating my distracation and intense focus with good humour and gamely offering his opinion when I repeatedly demanded that he choose his favourite among design and layout variations whose differences were barely detectable to anyone's naked eye but my own! Most especially, though, I don't have words or space enough to thank the friends who helped and supported me, sharing their time, skills, and care so willingly and unstintingly. I'm immensely grateful to Suzan — for her breathtakingly gorgeous contributions to the zine, which enhance the stories beyond measure, but also for moral support, advice, perspective, and encouragement, all offered with her trademark generosity. To me Suzan embodies the true spirit of fandom, and I feel lucky to know her. Very, very special thanks to Fish, who inspires me like no one else, for her sharp eye, wit, and humour, and her love for and unflagging belief in me.

And finally, I cannot even begin to list the multitude of Beth's contributions. She has made this an infinitely better zine than it otherwise would have been, and I can't imagine having done this without her. My gratitude to her for her constant help, support, patience, and friendship knows no bounds.

See reactions and reviews for The Strongest Will. 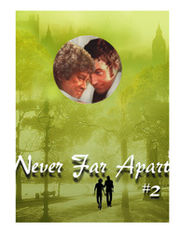 Never Far Apart 2 was published in 2009 and contains 205 pages. The cover and interior art is by Suzan Lovett and Lorraine Brevig.