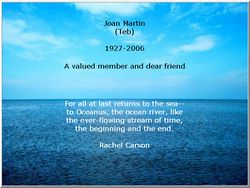 Joan Martin was an active slash fan writer and editor. She participated in fandom by mentoring other fans, offering writing workshops at conventions, betaing stories for writers and fanzine publishers up to her death in 2006.

On the topic of slash: "Slash is a wonderfully subversive voice whispering or shouting around the edges and into the cracks of mainstream culture. It abounds in unconventional thinking. It’s fraught with danger for the status quo, filled with temptingly perilous notions of self-determination and successful defiance of social norms." (Joan Martin, 1992, "Is Slash an Alternative Medium?")[1]

"She was born and raised in Minnesota - St. Paul, I believe - by her mother, a widow with a college degree- quite, quite rare in those days. I think her mom did social work. I remember Joan talking about going to settlement houses as a child.

Joan's lifelong interest in live theater and writing began when she was a child telling stories to her friends. She attended university with a number of well-known actors, including the brothers James Arness and Peter Graves. She dated Stewart Granger. She worked as an usher at the The Guthrie Theater in Minneapolis so that she could have access to plays, concerts and events, all of which enriched her from an early age. She described taking a street car ride into town as a nine-year-old in order to attend some performances, saying she knew it wasn't exactly safe even then but that she'd learned how to protect herself and be aware of any threats. She did not believe in keeping children from the realities of the dark side of life, feeling that they then entered adulthood, unarmed.

She looked for people to teach and encourage. An "egalitarian elitist," she didn't care who you were or where you started from as long as you showed promise, a willingness to work and a mind prepared to receive information and learn from it.

She taught in public schools, through the military as a civilian contractor and, of course, in writing workshops. Those of us whose work she edited have benefited far more than we can yet know by her skills.

She had at least one post-graduate degree, possibly more. She taught all of her life up to the month she died. She was a skilled and intuitive editor, particularly for women working in the more subversive forms of writing. Few people walking the earth knew and understood as much as she did." ~ Sharon B. [2]

In 2008, one reviewer described Joan's fiction:

"I absolutely adore this story. It's one to bring out when you need something slow, gentle and gorgeous. It takes our boys to America over the Christmas period, ostensibly to retrieve some documents for Cowley but in reality Cowley realises just how tired they are and how they need some quality time together without the pressures of work. And so he gives them this opportunity wrapped up in a job. There are just so many fantastic things about this story. The spell she weaves with her descriptions; about the house/pool/hottub, the butterfly tree, the wildlife are just beautiful. I cannot recommend it highly enough." probodie (reviewing "In Hot Water-An Idyl") [8]