Lieutenant Martin "Marty" Castillo is a character on the television show Miami Vice. He is Commander of the Organized Crime Bureau, Vice Division. 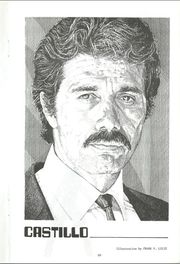 Castillo is a man of few words with a shadowy past fighting opium trafficking in Southeast Asia. Unlike many boss characters on cop shows, Castillo racked up quite a body count, including (among many others) machine gun-wielding KGB agents he killed with a katana. (No, really.) Castillo had many old friends who appeared over the course of the series, most of whom were either presumed dead, out to get him, or secretly Communist spies. Strangely, despite his equally tragic backstory and personal life, Castillo didn't produce nearly as much manpain as Crockett, perhaps due to a lack of personal theme music.

Golden Triangle Parts 1&2, Bushido, Duty & Honor/The Savage, The Rising Sun of Death, Heart of Night are the episodes contain most of what we know about Castillo's backstory. Cracked.com's review refers to them as the "Super Ninja Castillo" episodes.[1] Castillo speaks four or five languages[2] and can kick the asses of Thai assassins barehanded. Machine guns are no match for his skills with a katana. Like Thomas Magnum and everyone else on tv in the 80's, he has a presumed-dead Asian wife. Also a presumed dead best friend.

In the 2006 remake film, Castillo was played by Barry Shabaka Henley. One common complaint about the film was that Castillo was turned into a much more generic cop show boss.

Crockett/Castillo is the most popular pairing for Castillo. Castillo/Gretsky is common as a side pairing.