Dark Side of the Moon (Miami Vice zine) 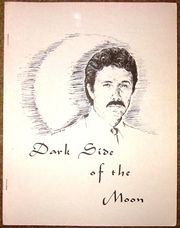 It is part of a series:

The novel follows Castillo undercover with the widow of a mercenary as they attempt to stop a group of her old friends. The canon characters and situations are depicted more or less as they were in the second season. In addition to Miami Vice characters, the story contains brief references to characters and canon from The Professionals and a number of original characters.

It has been called one of the best fics ever to come out of Miami Vice fandom, even by MV slash fans. However, the original editorial from the zine alludes to the tendency of fans to assume that all OFCs are Mary Sues.

From the editorial: "I actually only have one thing to say: I do not want to hear one Mary Sue comment. I am sick to the death of the term. It's come to describe any female character, and it is a label that infuriates me. Jordan is a strong individual. She, like all of us, deserves better than a ready-made label."