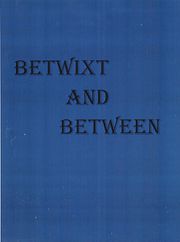 Betwixt and Between is a 240-page alternate universe slash Sentinel novel by Maigret and Wolfling with Blair as an elf. Interior artwork by The Theban Band.

There was a planned sequel, planned for summer 2001, Between and Beyond, that never happened.

Summary: Blair is quite surprised to find he's an elf prince and must go with Jim and Simon into The Between to fulfill a prophecy.

It has two parts:

"The artwork from The Theban Band is stunning and in my opinion worth the cost of the zine alone."—from comments beloww

The presentation of this zine is amazing. It’s high quality appearance shows the hard work and dedication that ffluxpress puts into their zines. The artwork from The Theban Band is stunning and in my opinion worth the cost of the zine alone. As I bought this zine from the web page before they had any information regarding the zine. (The only thing present on the site then was a story snippet.) I did not know that this was an Elf story. Or more obviously an AU. As I am not turned off by either of those things I charged ahead into reading this thick story. All 240 pages of it. If you are not use to reading fantasy novels (as I am not) the elfin names are hard to follow and sometimes confusing. But I still liked the fantasy and adventure of it. Blair’s father is an Elf king and has been searching for his son since Naomi took him away. The explanation for how Blair never knew who he really was is both fun and clever. I also enjoyed the way Blair’s character develops to understand his father, be angry at his mom while still loving her and how he learns to accept himself and his new found powers. The writers have a very interesting concept going on how the Elf and the Sentinel bond and communicate thus increasing Jim and Blair’s dependence, attraction and understanding of one another. The characterization is very well done and the sex was extremely hot. I loved the first time aspect of it the J/B relationship and how the characters around them act to their love. Being realistic this is a nice relaxing ROMANCE story. If you are looking for a nice, long, relaxing story I highly recommend this zine. In the wealth of TS zines that are out there this is a gem that I have loaned, recommend and given as a gift. I can’t wait to see the next zine from ffluxpress. They have a hard act to follow... I was upset to find that this was only Pt 1 (though complete in itself) of a larger story (there is a note that the next zine will be out summer 2001). Though I enjoyed this story I like to know of things like that before hand.[1]

It's official. I am now a lifetime, card carrying member of the Blair-Elf fanclub. Though I have enjoyed Blair-Elf stories in the past, I always sorta made this snorty noise and rolled my eyes heavenward as I said the words "Blair-Elf". Never again. This is by far the best story of this type -- AU fantasy -- that I have read to date. I guess it hit every button I have and apparently one or two I didn't know existed! I thought this was an interesting way to present the "Blair as an Elf" theme. For one thing, though it's obviously AU, it's also not. To me, it feels more as if they are in their "real" universe, but have to deal with this really weird, life-changing event and consequently have to visit another realm to do so; they are just so "Jim" and "Blair". Jim and Blair start out in their regular universe -- Jim as a detective, Blair as a student and observer. This is not the usual "Jim I have a secret. I'm an Elf!" type story. Nope, this is "Blair, The Reluctant Elf". LOL! And one pissed off Elf, too. Blair finds out, rather abruptly, about his family history. Naomi's character interestingly parallels that of canon Naomi, as she causes great distress in Blair's life by way of "helping". I love it when Blair's father keeps calling her "Woman". Snerk. You can guess how that went over with Naomi! I thought all the characters were extremely "in character", but the authors did a particularly good job with Simon and Naomi... Another thing I love about this story is the original characters. There are several wonderful new characters who have their own little adventures and problems going on. Yet, that somehow didn't distract at all from Jim and Blair. Rather than just being supporting characters, I really felt like I knew them and I cared what happened to them... In the first part of the story, Prophecy Of The Heart, Blair is returned to the place of his birth, The Between, where he learns of his heritage and his part in fulfilling an ancient prophecy. Jim sets out to find his missing guide and finds himself in a strange world soon followed by a very reluctant Simon. I love Simon's character throughout. He is grumpy, and pretty vocal about his displeasure with being introduced to yet more Jim/Blair weirdness. Poor Simon. He was sort of the comic relief in this story, but I kind of had to feel sorry for him. I won't tell you why. I think it'd be more fun for you to read it... After doing what they needed to do in The Between, the guys gratefully return to Cascade, only to learn days later that only part of the prophecy was fulfilled. In Keeping The Stars Apart, they must return to The Between and fight a really nasty mage. The authors did a great job with this character. He's the guy you love to hate! Once again Simon is dragged into events, bitching and complaining the whole way! Hee. The group finally defeats the evil mage, and secures The Between once again. There's just so much going on in this 'zine it's impossible for me to be able to explain it all coherently without giving away any of it. But it's now high on my list of favorite TS novels, a place I never really thought to put an AU. The imagery is great and the magick cool. Blair isn't a wimpy, frail elf, just Blair, who happens to be an Elf... I do want to take a moment to mention the sex scenes. Hot! This is a first-time story. And the sex just gets hotter throughout. There is biting in one of the sex scenes, in case that's a squick for you, well now you know. I nominate this 'zine as having one of the best 69's I've ever read! This 'zine would be worth the money just to read the sex scenes and for the art. However, the scenes were appropriate and there was not that feeling of the authors writing in the sex just because they felt it was time for some. I appreciated that the "gay" issue wasn't, well, an issue... Wondering what that second thing is that keeps this from being the perfect 'zine for me? Thought I forgot about that eh? It's Simon. Can't tell you why, but by the end I was feeling a little sorry for him. I say a "little" because part of what was causing his angst was ultimately for his own good, but still..... Poor guy never got a break! LOL! Also, Simon's distress over the whole Elf thing was never resolved, though not in a distracting "unfinished feeling" sort of way. So I'm hoping in the second 'zine, Between and Beyond, which is promised for the Summer of 2001, Simon will get a little of his own back! ;-) [2]

Those of us who prefer spiral binding, REJOICE!! ffluxpress has printed a second edition which is bound with the highly coveted, much sought after spiral binding. And do these guys aim to please or what? Because they realize some of us are rather anal and like things to match, they are going to offer the next 'zine, Between and Beyond, in both spiral and VeloBind! But now I have a quandary..... Do I buy the next 'zine with VeloBind to match my first, or do I buy a second copy of Betwixt and Between so I have a matching set featuring my most-loved spiral binding? Argh. They're messing with my mind! LOL! [3]

This is the best Elf!Blair story I've ever read. And the artwork by Theban Band is gorgeous. I'm really looking forward to the sequel, Between and Beyond. [4]