Chronicles of the Heart

Chronicles of the Heart is a slash Highlander anthology.

Both issues were revised when they were reprinted. In both issues, the fiction by "Esjay" was removed by that author's request. Other changes for issue #1 were a new cover, and an addition of a story. The only change for the second issue was the deletion of "Esjay's" story.

Chronicles of the Heart volumes 1 and 2 are Highlander zines featuring Duncan/Methos stories. The layout is quite lovely, the technical writing is good, but the amount of average stories in these zines outweighs the really good ones, although the latter definitely exists. Still, I'd recommend having these in your collection if you're a D/M fan. [1] 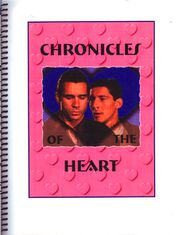 cover of issue #1, cover of the 2000 edition, Barbara Nice-Miller 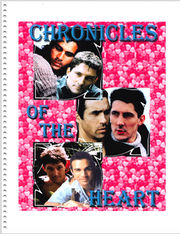 cover of issue #1, cover of the 2001 edition, Barbara Nice-Miller

Chronicles of the Heart 1 was published September 2000 (reprinted and revised in 2001) and contains 185 pages.

It won a 2000 STiFfie for Best Highlander Zine.

"PUBLISHER'S NOTE; The two stories formerly listed as "Mirror, Mirror" and "Love and Other Catastrophes," by Esjay, which were originally found in the first edition paper version of this zine has been since removed from this second edition ~ per the request of the publisher. Another story, "Chivalrous," by Holly was substituted to make up for the loss."

Heroes, that's what strikes me about Duncan and Methos. Two heroes, each drawn to each other for some strange and unknown reason. Polar opposites, yet when they are together, they complement each other. Two halves of the same whole, soulmates ~ and all those other tired cliches.

About four years ago, I made my way into Duncan and Methos fandom, through a friend who made me watch all the Methos episodes one Christmas back in 1999. Prior to this, I hadn't been much of a Highlander fan, but after "Chivalry" I was hooked! Soon I found my next obsession ~ Duncan/Methos fiction. It was then I decided to do a Duncan/Methos zine.

After Media West 2000 convention and finding out how little Highlander slash fiction is out there; I decided to put this zine together. A zine that strictly focused on the romantic relationship between Duncan MacLeod and Methos. To me they are the only pairing in Highlander that I find interesting enough to write about. Sure, Kronos/Methos can be fascinating, but there is something about Duncan and Methos in the same room together that gets my attention.

And that is exactly what this zine is about. You will only find DM/M stories in Chronicles of the Heart. I think you will enjoy every aspect of the Duncan & Methos relationship that is portrayed here. Some stories are sweet, some are hot, and others filled with angst. A good blend of new and seasoned writers from the fandom. Chronicles of the Heart wouldn't have been possible without the help, talent and hard work from all its contributors. Many thanks to all the authors: Olympia, Rachel, Karen, Matilda, Dayspring, Amy and Emma. And a special thank you's to Clivia, Jam, Theban Band, Erika & Sherry ~ who did the inside artwork for me. But, especially I'd like to thank Barb Nice-Miller for doing not one, but two beautiful covers for me. After, CQTH 1 was published November of 2000, Barb and I got to talking at Media West Con and she wasn't happy with the original cover, so she designed a new one, which is the one you have now. The original 'Pink Heart' cover has been retired and the new CQTH 1 cover is here!

And lastly, I'd like to thank Emma Keigh & Jeimie, who helped me enormously by editing a lot of the stories with me. Thank you all. Now, enjoy the zine!

Chronicles of the Heart 2 was published in April 2001 (revised and published in February 2003) and was 252 pages long.

The artists are not credited. 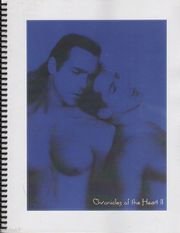 cover with comb binding of issue #2 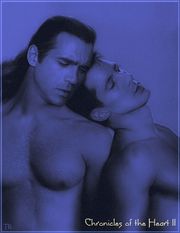 cover of issue #2 by The Theban Band

The entire zine won a 2002 Fan Q for Best Highlander Zine, as did some of the individual content.

Love. What other word draws us to these two characters? It is the love between Duncan and Methos that draws most of us into this fandom. It is the love for them that keeps us here.

After the success of lost year's Chronicles of the Heart zine, I decided for the New Year, I would attempt to put out another Duncan/Methos only zine. This zine will premiere at Media West 2001. I am very happy with the results and hope you will be too!

We have a lot of great authors, and artists in this fandom and I am happy to say that most of them are in this zine. Chronicles of the Heart 2 wouldn't have been possible without the help, talent and hard work from all its contributors. Many thanks to all the authors: Sfscarlet, Karen, Matilda, Dayspring, Tessa, A.F., Olympia, Jennie, BithoS and Margaret.

Many, many thanks to Theban Bond, who created the beautiful cover and title page. And a special thanks to Erika, Sherry, Ysonne, Chonie and Killa who did the inside artwork for me. As usual these ladies came through for me and their work is truly magnificent.

A special merci to Emma, who helped me with the edits.

Next to last, I'd like to thank Jennie, who helped me enormously by editing a lot of the stories with me. Our friendship started under weird circumstances, but I am very happy to hove as a friend. Lastly, I'd like to thank Martha for introducing me to Highlander fandom and dragging me kicking and screaming into Duncan/Methos fiction. I know, I know, I said I didn't want to be in another fandom, and boy, I'm glad I was wrong!

Finally, I'd like to thank you, the reader, for all your encouragement and support while I was preparing this zine for publication. You have made it fun to do. Enjoy the zine and please drop the authors and artists a note and tell them how much you appreciate their work. LOC's are what keeps a fandom alive!