The pairings are Gibbs/Tony and Mulder/Skinner, though the focus appears to be on the NCIS couple. 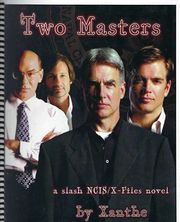 From a distributor: "Tony decides that he wants more from Gibbs than headslaps. But can Gibbs be persuaded to love again, and is Tony prepared to confront the demons from his past and learn how to trust?"

The premise is the same as 24/7. A Dom and a sub have worked together for years. They respect each other a lot. Their relationship has always been strictly professional. Then an event happened and they meet in a D/s and BDSM place and context. They begin a 24/7 Master/slave relationship together. But the sub has a very trouble past with kin’s death he feels responsible for. This makes him psychologically instable and he suffers of insecurity. In both story, Dom and subs are the monogamous and jealous type. The relationship goes relatively well until the Dom makes a mistake (completely out of character) and this leads the two MCs in a crisis. There are a few action scenes in accordance with the TV series all along the story to spice it. And... don’t forget the HEA....Again the author digressed. In the TV series, Gibbs is known as always “seeing everything”. He has an eye on everything and nothing ever escapes him. He cares a lot about all his team’s members and people he loves. When you write a fan fiction, you must go with your MCs’ characteristics. And it’s what the author did up to two thirds of her story. Until then, Gibbs was himself: caring and observant. But then...

This is so stupid for a Dom to wait for his disturbed sub with one of his ex-sub without even taking care to look for his sub’s arrival. Gibbs was worried about his relationship with Tony and how his sub felt at that point of the story. Hence, Gibbs should have been anxious to see Tony and watch incessantly for his coming. Gibbs knew that Stan made Tony jealous, but despite this, he accepted to talk to him at the bar at the worst moment. The author went out of character again; she made Gibbs suddenly unable to see anything and uncaring of his sub’s wellbeing. She threw in an action that was completely out of whack just to get her climax. This is contrived, unrealistic and inconsistent again, just as the first branding ceremony for Fox in 24/7 was. I won’t read this author again; not until she understands that forcing a situation like that isn’t convincing at all. Tony’s reaction when he saw Stan was understandable. But Gibbs’ attitude (accepting to talk to Stan then and there and not taking care to watch more carefully for Tony’s arrival) wasn’t at all. That’s as if an amazing super-spy suddenly opens the door without checking through the peephole, only to get captured on his doorstep. It leaves us on a discordant note. Especially since the author could have very easily found a more realistic way to create a similar situation in accordance with her characters’ personality and feelings at that moment of the story. Two little examples: • The author should have made Gibbs watching ceaselessly for Tony, while discussing with Stan; then seeing Tony flee from the bar, Gibbs could have run after him but Tony could have escaped. • Or Gibbs, who knew that Tony would get at Murray’s close to the time limit and that Stan made him jealous, could have stopped his discussion with Stan sooner and took an appointment with him for the next day if there was something more to say. Stan could have stayed a little longer at the bar to talk with other patrons. Nevertheless, Stan’s presence could have made Tony suspicious enough to run away. Then Gibbs could have run after Tony, trying to catch his sub before he got into his car, but without success. I gave only two easy ideas in accordance with Gibbs’ personality. They don’t require large changes. I can imagine many other consistent ways to write that part. And the rest of the story could stay the same. That’s a shame when an author who has talent takes the easy route and fails to give us the great story that she could have written.

Because at least two-thirds of the novel is good and there is nothing wrong with the writing except rare mistakes and misspellings, I give this story 4 stars. I’d have given 5 stars if there had been no digression. [3]

At all costs I wanted to re-visit Walter and Mulder and thereby had to put up with the "main" couple in this romance fanfic, Tony and Gibbs, who feature in a TV series I have never watched. Not that I am a die hard X-Files fan either, actually, I didn’t even see three episodes all together.

My problem with Two Masters lies ultimately with the author herself, who made Mulder and Walter's romance such a perfect read that any other couple has a hard life to hold a candle to them.

Basically, it boils down to the fact, that I didn't really like Gibb's brand of domination. It felt plump and inflexible, lacking the rich fantasy that Skinner showed. Maybe my perception would have been different hadn't I read the book immediately afterwards, still being ona high from 24/7. C [4]

Another full time BDSM relationship story from Xanthe. It is faster paced than 24/7, but like 24/7 it shows pretty much everything that happens between the Dom and sub. It’s a bit like watching a security camera tape full of naughty scenes. Only, you can read the minds of those featured in the camera. Xanthe certainly likes elaborating her points and while this means we get a comprehensive look at the relationship and what is happening inside her characters, it can read slightly repetitive at times. There are some gorgeous scenes here and I adored the elevator scenes. Gibbs makes a formidable Master and Tony is one lucky sub. [5]

Two Masters would have been a five-star read for me if it had been a little shorter. As seems to be Xanthe's style, she belabors a point and the repetitiveness got to me. As Kate mentioned, she got tired of Gibbs after awhile. For me to agree - and I'm such a Gibbs slut - should tell you something.

But...it picked up its pace again in the last 100+ pages so if I ignore the middle 100 pages, this was a good, sensual read. It deals with DiNozzo's daddy issues (of course) and if I lived in that universe, I'd want Gibbs for my Dom. I loved the scene early in the book where Skinner (some character from X-Files) calls Gibbs in for a DiNozzo crisis intervention. If I wasn't a Gibbs fan already, I would have been then. Thank God, I found out after that that I'd only have to wait one week for Gibbs to fuck DiNozzo - if the latter agreed to take the collar - because there was no way I was going to read 500 pages to get to a sex scene! And I was such a good girl - I didn't skip anything but read every page leading up to the final day.

Tiring as Xanthe may be to read, I'm far from over my Gibbs/DiNozzo obsession so when I have some free time during the day, I watch a couple of episodes (I'm only at Season 1, Episode 5) and read the fanfic at night. I'm in Happy Land for now. [6]