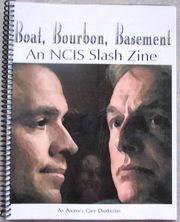 Boat, Bourbon, Basement 1 was published in 2009 and contains 136 pages. Cover and illustrative art by Eilidh17, layout by JayEm. Title art for all except Secrets: Zabby. Title art for Secrets: Lyn.

Summaries below from the publisher:

Boats, Bourbon, Basement 2 was published in 2011 and contains 163 pages, 67911 words. All stories are Gibbs/DiNozzo except Secrets (DiNozzo/McGee) ratings from PG to NC17. The cover is by JayEm. Story art by Annie, Lyn, Rose Malmaison, Cheryl, and JayEm. 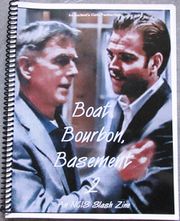