This article is about the 1982 film. For the Sentinel fanfiction, see The Thing (Sentinel story). For other uses, see Thing.

The Thing is a 1982 horror & science fiction film directed by John Carpenter and starring Kurt Russell. It is an adaptation of the novella Who Goes There? written by John W. Campbell. The film tells the story of a research team in Antarctica that is threatened by the titular Thing: a deadly parasitic alien that can infect people and shapeshift into them, copying their personalities and memories. As anyone in the group may be the Thing, paranoia, distrust and conflict set in the group.

At the time of the original theatrical release, The Thing was a commercial disappointment and panned by both critics and John Carpenter's fanbase. However, over time, it has been reappraised as one of the best science fiction and horror films of all time. After being released on home video and television, a cult following developed around The Thing that has remained active. Notable fandom activities include film screenings, fanworks, theorizing, and more. The fandom's dedication has gained attention from film scholars and media outlets.

In Antarctica, two Norwegian men pursue a dog to the American Outpost 31 station while shooting at it, but both die. After finding a distorted human corpse at the abandoned Norwegian station and witnessing the lone dog metamorphize, the Outpost 31 crew learns that the dog was an alien creature in disguise. Previously discovered by the Norwegian crew, the creature can intimate other organisms after infecting them, perfectly replicating their appearance, behavior, and memories. Further investigation reveals that one or more among the Outpost 31 crew is infected, and the creature will infect all human life if it reaches populated areas.

Distrust, paranoia, and panic quickly set in the group, as no one knows who to trust. This is compounded by acts of sabotage, suspicious behavior on all sides, potential framings, and those infected killing other crew members after being ousted or forced to reveal themselves. As the group dwindles, the few remaining decide to destroy the base to kill the creature. During the setup of explosives to detonate the base, more crew members are killed. Eventually, only two members of the crew are left. While they have successfully managed to destroy the base, both face death by exposure, as well as mutual distrust and suspicion that one of them may be the Thing.

The Thing only made a modest amount of money at the box office, and was panned by both critics and John Carpenter's fanbase at the time of release.[1] However, after home video and television releases, the film's reception steadily became more positive.[2] Today, The Thing often appears in best-of lists for science fiction and horror films, such as number 32 in Esquire Magazine[3] and number 1 in The Boston Globe.[4] In a Q&A before a screening of the film at CapeTown Film Festival, John Carpenter remarked on the critical turnaround and the growth of the fandom.

The movie tanked when it came out. It was hated, hated by fans. I lost a job, people hated me, they thought I was this horrible, violent — and I was. But now here we are 31 years later, and here you are filling the theater.
John Carpenter[1]

Similar to John Carpenter's other films and other horror films of the 1980s, a small but dedicated cult following for The Thing formed after its home video release. This following remains active today. Today, most organized online fandom activity and discussion centers around the fan site Outpost31.com and the communities that the site owner Todd Cameron maintains.

While there were more fan sites in the early 2000s, many are now abandoned or defunct. Some smaller online groups for the film remain active, and fan activity is also scattered throughout various social media sites.

A variety of different activities are popular within the fandom. Notable activities include screenings of the film, fan art, and fan theories. The fandom as a whole has occasionally gained attention from fandom scholars, film history scholars, and wider media outlets. Additionally, some horror news sites, such as Bloody Disgusting, have highlighted fanwork created by the fandom.[5][6]

You know you’re among some true horror fans when below-the-line filmmakers get eager cheers.
Emily Rome[1]

Influences on other works

The Thing has had a significant impact on both professional works and fanworks, especially those in the realm of horror and science fiction. Various media have directly referenced the movie, such as Resident Evil and The X-Files. Other creators have cited the film as an influence on their work.[7][8]

I have vivid memories of watching an uncut version of John Carpenter’s “The Thing” on network TV when I was 10 years old. My brother and I couldn’t have been more excited. The only images I knew of the movie were its poster and a still of Kurt Russell with a lamp.
Edgar Wright

In October 2001, Todd Cameron established the site Outpost31.com as a dedicated fansite to The Thing. Remaining operating for over twenty years, the site collects and documents a variety of information, such as canon information, trivia, and fanworks. The site's operator temporarily changed to Tony Chefles from 2010 to 2016, before being rebuilt in 2017 to coincide with the 35th anniversary of the film. John Carpenter has acknowledged and endorsed the site, calling it "my favorite fan site":

A message tonight from the man himself, John Carpenter. John has learned about our 40th Anniversary Project and is very excited. He has a message for all the fans: "Outpost #31 is my favorite fan site. Long may you live."[9]

A photograph of Todd Cameron at the filming site. He is holding a paper sign that reads "OUTPOST 31".

The Thing was filmed outside of Stewart, British Columbia in the nearby Salmon Glacier in 1981. In August 2003, fans Todd Cameron and Steve Crawford traveled to Stewart and located the filming site using production photos and assistance from locals. Todd and Steve documented their trip, and a short documentary has been included on official Blu-ray releases of the film. Since Todd and Steve's trip, other fans have traveled to the site. Fans often take pieces of the set and helicopter wreckage that remains on the site.[10]

A group trip to the filming site to celebrate the film's 40th anniversary is scheduled for June 25, 2022. Planned activities include a video tour of the site, a campout, and a watch party synchronized with other fans globally. While initially organized by Todd Cameron, the trip roster and mailing list were dropped in favor of fans creating and coordinating their own plans.[11][12][13]

Thing-Fest was an annual fandom event, first hosted by Todd Cameron from 2001 to 2008 before transferring to Joe Hart. The main focus of the Thing-Fest when hosted by Todd Cameron was a screening of the film on 35mm. Most Thing-Fests were held at Western Film theater in London, Ontario, Canada, but the 2008 event was held at the Bloor Cinema in Toronto, Canada. The event allowed fans to meet up and socialize. Some fans attended the screening in cosplay. Notably, Thomas G. Waites, the actor for Windows, attended the 2008 Thing-Fest and held a Q&A for fans.[14][15]

After 2008, Todd Cameron sold parts of his fan collection and transferred the event to collector Joe Hart. In 2013, Joe Hart hosted Thing-Fest at the horror fandom convention Days of the Dead; instead of a film screening, the focus was on his personal fan collection.[16]

Every year, after the last flight has left for the season, the crew at the Amundsen-Scott South Pole Station, the United States' Antarctica government research station, celebrates the first evening of winter by screening The Thing from Another World, The Thing (1982), and The Thing (2011).[17]

According to station tradition, we celebrated the first evening of winter by gathering in the gym after dinner to watch the sci-fi move The Thing — both the old and new versions. This might have changed a couple of people’s expectations of our coming winter, but now we know how to deal with alien monsters. However, we have yet to locate flamethrowers, as they are not in MAPCON, the U.S. Antarctic Program’s material and maintenance tracking software.
Sven Lidstrom, South Pole correspondent

A Reddit AMA with Josiah Horneman (JoeSpinsTheGlobe), a physician assistant who works at the Amundsen–Scott South Pole Station, received a number of questions related to the film, either asking about the tradition or in jest.[18]

MurderDoneRight: How many The Things have you had to deal with so far out there?

JoeSpinsTheGlobe: Yeah I like the movie :) We actually watch a set of 3 movies every year when winter starts ("first damn week of winter!"), which generally happens the weekend after the last flight of the season leaves.

CreasingUnicorn: How many The Things have you had to deal with so far out there?

JoeSpinsTheGlobe: No Things spotted but I thought I saw a dog running in the distance once....

Shqiptar89: Have you been visited by a dog being chased by two crazy norwegians in a helicopter?

In addition to officially licensed media, some unofficial works based on The Thing have been published professionally. Examples include:

Notably, Snowblind and The Things were praised by the cast and crew of The Thing.[19][20]

Many plot threads are set up throughout the course of the film. However, most of these threads are never solved, in order to build tension and contribute to the film's overarching theme of paranoia. Additionally, details on the titular Thing, such as its motivations and how its biology works, are often left ambiguous.

The lack of clear answers to the film's mysteries has set up room for fan theories on the causes and outcomes of these situations. Debates on these theories take many forms. The most common form of these debates are fan essays and online and offline discussions. Many online discussions take place on sites such as forums and Reddit. As The Thing is also the subject of academic analysis, there is often overlap between academic and fan debate. Most speculation takes a Watsonian perspective on the film's events, or a blend of Watsonian and Doylist. No definite fan consensus has ever been reached for most theories.

Interpretations of fan theories and the film's events occasionally appear in fan works for The Thing, most commonly fanfiction. Tropes that appear in fanworks integrating theories include:

Themes and Tropes in Fanworks

The majority of fanworks for The Thing reflect themes, tropes, and imagery found in the movie. This includes: 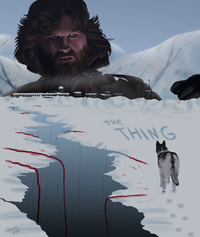 Squires, John (6 Feb 2020). "Artist's Drawings Turn the Characters from 'The Thing' into a Faux Line of Funko POP! Vinyl Toys". Bloody Disgusting. Archived from the original on 5 April 2022. Retrieved 5 April 2022.