It's no longer a stub but still incomplete considering it's a fandom that's existed for a long time. 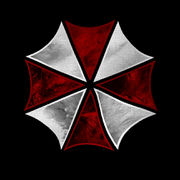 The logo of Umbrella Corp, which has become a symbol of the series

Resident Evil is a video game series developed by Capcom that has expanded to become comic books, novels, and feature films.

The first game was released in 1996. Currently, the most recent game in terms of the chronology of the series is Resident Evil Village, released in 2021.

There are several tie-in novels, none of them canon and many of them taking place in different universes to each other. The main novelisation series was written by SD Perry: it starts out roughly adapting the games but quickly diverges from canon a lot.

There are also several manga, some of them canon, and a non-canon Wildstorm Comics series.

There are several mobile games such as Clan Master, none of which contain any canon material and some of which are Japan-only.

Resident Evil characters have also appeared in crossover series such as Marvel vs Capcom, Teppen, and Super Smash Bros.

Resident Evil is a science fiction horror series, set in a world that is controlled to a large extent by powerful companies such as Umbrella Corp. These companies have been illegally experimenting on people to create biological weapons including zombies. The series protagonists range from police officers, military and government agents fighting against these corrupt companies and the Bio-Organic Weapons they create, to ordinary people caught up in bioterror attacks and zombie virus outbreaks and trying to survive.

History of the Fandom

The fandom has been active on various sites over time. It is one of the larger video game fandoms on fanfiction.net, with 11.9K fics. The fandom increased in size a lot with the release of Resident Evil 4, which updated the gameplay and graphics compared to earlier games, bringing in new fans. Resident Evil 4 also increased the popularity of the Leon/Ada ship, which had begun with Resident Evil 2. A popular Leon/Ada writer at this time, whose works have since been deleted from fanfiction.net, was Ada Adore.

Each new game has generally brought in new fans. The remakes of the earlier games, in particular, brought in a lot of people, with the Resident Evil 2 Remake creating a divide between Leon/Ada fans and those who instead shipped Leon/Claire (a ship which had existed before but had never been as popular), and the Resident Evil 3 Remake bringing attention to Jill/Carlos (aka Valeviera). While some fans of the older games criticise the newer games and remakes, this is not universal, with many of the more recent entries in the series being positively received in general.

As well as fanfiction.net, the fandom is active on AO3 (increasingly so for fanfic of the newer games, but a lot of older fic is still only on fanfiction.net), Deviantart (very active in the late 2000s/early 2010s, but still active to some extent), and Tumblr (popular for art but also for headcanons, drabbles, and roleplay).

The film fandom is for the most part separate as the series are so different, although there is some overlap.

The most popular characters from the first game for fanfic are Chris Redfield, Jill Valentine, and Albert Wesker. Rebecca Chambers was initially unpopular but became more popular after Resident Evil 0. Barry Burton inspired many memes because of his badly translated dialogue and voice acting. The release of the second game led to Leon S Kennedy, Ada Wong, and Claire Redfield also becoming popular. While other characters are also popular (such as Sherry Birkin, who was introduced as a child in RE2 but became much more popular after appearing as an adult in RE6, as well as Jake Muller and Piers Nivans from RE6 and Alex Wesker from Revelations 2), the main characters of the first two games (who have kept appeared throughout the series) have the most fanfic written of them. Lady Dimitrescu from Resident Evil Village is the most current popular character so much, that prior to the game's release, the team itself occasionally gives fan service tease and info about her on social media.

The series leaves the nature of most relationships ambiguous so they could be interpreted as UST or platonic. This means nearly every character has been shipped with nearly every other. There are a few canonically married minor characters, however, and Leon and Ada have been shown to kiss. Ethan and Mia Winters from RE7 are unusual for the series as the main characters who are married.

However, there are many other popular ships (especially on sites other than AO3) such as Rebecca Chambers/Billy Coen, Albert Wesker/Jill Valentine, Albert Wesker/Claire Redfield, Claire Redfield/Steve Burnside, and Albert Wesker/William Birkin (a ship that was quite popular early in the fandom, especially on Deviantart, but died down as William Birkin didn't appear in anything for a while and other ships with Wesker became more popular; it is fairly rare on AO3 but still has shippers on Tumblr in particular).

Occasionally the question of Leon/Claire vs Leon/Ada has been resolved with an OT3. Albert Wesker/William Birkin/Annette Birkin has also sometimes been portrayed as an OT3, notably by Texts From The BSAA.

DC Douglas is known for his engagement with the fandom in general, not only appearing at cons but creating parody videos (such as "Life With Al", a series in which Albert Wesker is his roommate) and recording various statements in his Wesker voice. Sometimes other voice actors have joined in, such as Roger Craig Smith (who voiced Chris Redfield in some games) and Mary Elizabeth McGlynn (who voices Alex Wesker.) When the Resident Evil 3 Remake was released, DC Douglas streamed himself playing the game on YouTube: the first time he had actually played a Resident Evil game.

For a while, starting in 2011, some parts of the fandom had a Wesker Week event (in 2015, DC Douglas and Mary Elizabeth McGlynn recorded a parody video for this), but it appears to be no longer active.

Another activity common in certain parts of the fandom is creating fan translations and analysis of the original Japanese scripts of the game. This was especially popular in the early days of the fandom when the official translations were often of poor quality, but has continued, often by people who believe the official translations missed out certain connotations of the originals. Sometimes this has revealed censorship: for instance, Sergei Vladimir was more obviously masochistic in the original script, with lines such as "know the meaning of pain, and seek bliss beyond it" and "pain is blissful, suffering is joyful" being removed or toned down by the translators. In other cases, it has led to controversy: for instance, some fans use the original Japanese script of Revelations 2 (which compares Alex Wesker to a widow after Albert Wesker's death, amongst other details) as evidence that the relationship of the Wesker siblings was incestuous (there is also debate about whether it counts as incest, since they're not biologically related, but in every version of the script Alex refers to them as brother and sister), while others say that while the Japanese script portrays their relationship as closer, it doesn't confirm it to be sexual or romantic. In the early days of the fandom, before information was as easily accessible, there were a few cases of fans claiming to have found things out from Japanese materials or people who worked at Capcom but never actually giving these sources, which led to some things being thought canon without evidence for a while.

As it is a video game fandom, mods and Let's Plays are also popular.

Impact On Other Fandoms

Resident Evil characters have appeared in several crossover games, such as Teppen (a non-canon crossover of several Capcom games), Marvel vs Capcom 3, Project X Zone, and Super Smash Bros. This has led to the fandom having overlap with other fandoms, especially the fandoms of other Capcom games. In particular there is an overlap with Devil May Cry, thanks to Devil May Cry being loosely based on a rejected concept for Resident Evil 4 (Dante was inspired by Leon, and Vergil by Wesker, although the characters later diverged from this). This has led to crossover shipping such as Leon/Dante and Wesker/Vergil. While there is only a small amount of fic for these ships, there is more content on Tumblr: for instance, The Resident Devils is a crossover blog focussed on Wesker/Vergil [last accessed 06/06/2020]