From Fanlore
< Steve Rogers
Jump to navigation Jump to search

Steve/Tony, known as "Stony" or "IronCap", is a popular slash pairing in the Marvel Comics 'verse, the Marvel Cinematic Universe and also gets written for other canons featuring the characters.

On July 4th, 2007 Elspethdixon and Seanchai began posting Resurrection, Reconstruction, and Redemption, the first Steve/Tony novel. They are widely regarded as having kickstarted S/T fandom. Elspethdixon and Seanchai continue to be active in the fandom, and have been instrumental in its growth and in the past they hosted the pairing's main archive, Tales of Suspense.

The main Steve/Tony LiveJournal community is cap_ironman, created on 19 February 2008.

The Alphabet Challenge, which started in July 2008 and continued to September of the same year, resulted in 26 new fanworks, and was collected in a fanzine by [1] Runenklinge.

The January 2009 Winter Fluff and Fairytale challenges on cap_ironman produced over 20 fairy Steve/Tony fairy tales. Steve/Tony AUs have been a tradition since.

In January of 2009 Kijikun launched the Cap_Ironman Big Bang challenge. The Big Bang went live with fic and art on July 7th.

When the Captain America: The First Avenger was released in 2011, both Tony and Steve finally had a movieverse counterpart. That and the anticipation for the Avengers movie lead to an influx of movieverse Steve/Tony fic, art, vids, and other fanworks.

Some fans of this pairing, particularly fans of the Marvel Cinematic Universe, have engaged in a ship war with fans of the highly popular pairing Bucky Barnes/Steve Rogers ("Stucky").

The Marvel Universe is a multiverse canon. Backstories and characterisation might vary in different universes, which has consequences how people ship the characters. In her info post about major Marvel Universes and how they relate to Steve/Tony tsukinofaerii explains:

Because of the tight interweaving, usually similar mediums and cross-section of interests, the Marvel multiverse fandom generally acts as a single fandom, rather than individual ones. Using as an example, many members may be fannish over several versions of Steve and Tony simultaneously without necessarily feeling that these are different fandoms. This also leads to occasions when a fan is not interested in certain versions of Steve and Tony, or they ship them with other people in different universes. The ultimate effect of this is the need for origin universe labeling.[3]

About the merging of the universes in fanfic (also, referring to the Across the Multiverse photoset):

Aside from the “two attractive white men” factor, which is not to be underestimated as a motivator, MCU Steve/Tony comes out of the pre-existing Steve/Tony ship that the rest of those panels represent. There was a strong ship before even the first Iron Man film, in part because their relationship is so close and highly-charged in the comics; they may have other relationships that are similar but few that are so frequently visible. Very few people ship exclusively MCU, even if they think they do, because fandom has passed a lot down to them which sets up a context for using RDJ and Chris Evans to play out scenarios more suited to a comic book setting.

Many of the “classic” and popular fics in the fandom were written pre-Avengers if not pre-MCU entirely. Post-Avengers popular fics like Scifigrl47’s Toasterverse clearly draw on comic book tropes as well as MCU ones, and that’s not an accident; Sci has a long fandom history and is pretty well-read in comics.

If you read a fanfic where the Avengers are all living together under one roof, that didn’t come from the endscene of Avengers where Tony’s clearly planning it; that came, even if only through older fics, from the fact that in the comics, they often have and sometimes still do.

If you read a fanfic where Tony is characterised as a self-loathing asshole who thinks he’s not good enough for Steve, that characterisation might be a woobiefication but also frequently comes down to newer writers from older writers who got it direct from the comics, where Tony often believes he’s not good enough for the friends he has, Steve especially.

If you read a fanfic where Tony has worshipped Steve since he was a boy, that derives from comics where Tony literally has a Captain America shrine in a room at Stark Mansion, and where his passwords are often some variation on Cap’s name. I could go on, but you get the idea.[4]

For more information on the Marvel multiverse see List of Marvel Universes.

Earth-616 is the main continuity in Marvel Comics.

Notes: Due to the telescopic timeline, the Avengers have only been a team for 10-11 years in-story, but have been published for over 50 years real time. This makes things somewhat confusing, especially since some points are "fixed" (notably Steve's service in WWII).

Tony has, at times, had a chest plate, an artificial heart, a replacement heart and now the reactor. During the New Avengers timeframe he gained Extremis, a techno organic virus which seems to operate as a form of technopathy. It's essentially a computer-brain that lets him store part of the armor in his bones and operate machines with his brain. Extremis rebuilt him from the ground up and resolved his previous physical problems, including his heart. Extremis was compromised during the Secret Invasion, and for some reason that was never really explained, he needed an arc reactor to recover from having his brain deleted.

About the only thing that changes more than Tony's physical ailments is his facial hair.

Trivia: Natasha Romanov was originally a Soviet Spy called the Black Widow who had been sent to seduce and destroy Genius Millionaire Etc Tony Stark. Somehow, she ended up dating a circus performer named Clint Barton (Hawkeye) and temporarily turning him into a villain with the power of boobies. Eventually, they both did a Heel Face Turn and became Avengers.[3]

In the MCU Steve and Tony meet for the first time in the The Avengers (2012) movie, set after Iron Man 2 and Captain America: The First Avenger (2011).

Steve and Tony start off as highly antagonistic. Steve is bristly and easily prodded. Tony is, of course, a prodder by nature. Through the power of bickering, the self—induced fridging of Coulson, teamwork and Tony's attempted sacrifice, they seem to come to terms by the end of the movie. At the very least, they shake hands and look friends. Tony is currently very cozy with Pepper (which is adorable, I feel the need to say) and Steve has only been defrosted for a couple of months, so there's still plenty to work with.[3]

Avengers Assemble (shortened AA) is a cartoon series airing on Disney XD since 2013. Season 3 was renamed to Ultron Revoution and season 4 Avengers Secret Wars. Steve and Tony's relationship in Avengers Assemble is very friendly, which makes it a great ship fodder.

Tony: Steve, even without your shield, you're still Captain America. Without my armor, I'm just...

Steve: Tony Stark! The Tony Stark. Billionaire genius. You're probably one of the three smartest men in the entire world. You're as tough as they come. You invented hardcore. The Avengers are lucky you're on our side.

Tony: Really? You know two people smarter than me?

Avengers Academy (popularly shortened to AvAc), a mobile game that launched in early 2016, shows Avengers as college age young adults. Steve and Tony are younger but still very much Steve&Tony we love.

Captain America: I like you Tony, but don't ever disrespect the election process.

Iron Man: I like you too Cap, but by now you should know that I pretty much disrespect everything.

Part of the 2015 Secret Wars event. It became popular even before the first issue was out, mostly due to great western-style costume designs for Steve and Tony by Nik Virella. In this AU Tony is a town blacksmith, Steve is a sheriff. Some of the highlights include Steve and Tony bantering at each other in the saloon, Tony serenading Steve with some old songs, defeating some thugs together, all in the first issue. The second issue was infamously tragic, but that possibly only contributed to the popularity of the canon, because SteveTony shippers love their angst, it is known.

Fix-it & reaction fic for Civil War dominated the pairing during the early years, due the narrative in the main comic 'verse. It turned again in fashion post Captain America: Civil Wars (2016).

There are a surprising number of stories wherein they are best friends and sleeping together and yet one or both of them is mournfully convinced that the other thinks it's just casual sex and not TRUE LOVE.

Also popular is Extremis Behaving Badly, wherein Tony's (sadly short lived in canon) cybernetic-cyborgy-computer virus-implant thingy acts up and hijinx ensue. Examples: A Meeting of Minds by Nix; Without Irony by tsukinofaerii; There is no I ... by jadedoll.

In the Avengers movie fandom, there are a number of stories in which they start out hating each other (or thinking the other hates them BUT REALLY THEY DON'T!!), such as Ready, Fire, Aim by Gyzym and I stole the keys to this guy by kellifer_fic. In most pre-TA (pre The Avengers movie) stories the characters all move into one of Tony's mansions which leads to a lot of domestic scenes between Steve and Tony and the rest of the team.

For the most popular trope, OH NO POOR TONY, see most of the fandom. 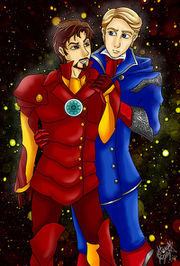 The Man with the Clockwork Heart, fanart by La Pinshe Konsha 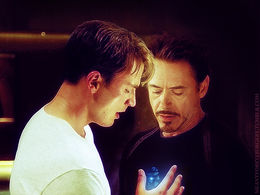 Manip by meantforeyesurgery, inspired by a scene in The Act of Creation Will Be Your Salvation, based on the quote “It’s keeping you alive. It’s the most beautiful thing I’ve ever seen”. 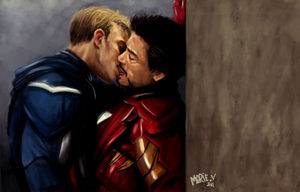 "Debrief? What Debrief?" by MarieLikesToDraw. Fanart of Steve and Tony kissing. (MCU) The story (First Impressions Are) A Work in Progress was inspired by this image. 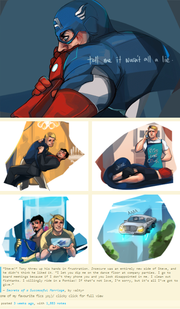 Secrets of a Successful Marriage, illustrations by ironfries

Buy You A Mockingbird banner 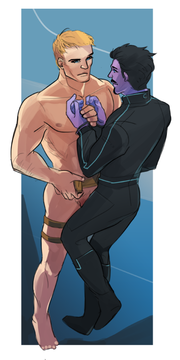 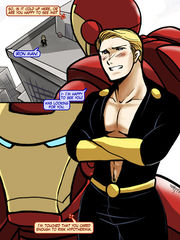 scene from Engaging the Enemy, art by Whippy 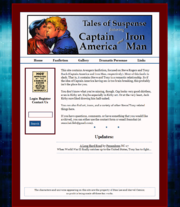 Tales of Suspense, a Steve/Tony archive

Everything Left Unsaid, the cap_ironman community