Since their interactions in the comics fans have shipped the pairings of Steve Rogers/Tony Stark and Bucky Barnes/Steve Rogers, however the ship war seems to have occurred primarily between fans of the Marvel Cinematic Universe.

Fans began shipping Steve Rogers/Tony Stark after the release of first The Avengers film, because they are arguably the two leaders of the group. There were shippers of Bucky Barnes/Steve Rogers after Captain America: The First Avenger, however the ship seemed safely in the past tense until Captain America: The Winter Soldier, when it was revealed that Bucky was still alive. The ship war began after Winter Solider, but seemed to reach its peak in the months prior to, and during the release of, Captain America: Civil War.[1] After Civil War some Stucky shippers declared the Stony ship "dead", because Steve sided with Bucky during the film.[2]

The ship war included both sides writing meta deconstructing the other, with Stony shippers saying the Stucky relationship is unhealthy and co-dependent[3], and Stucky shippers saying that Stony were never really friends, just co-workers[2], and that Tony can never truly understand what Steve's been through. Other tactics include sending hate via anon on Tumblr[4] and posts mocking the opposing ship and its fans.[5][6] 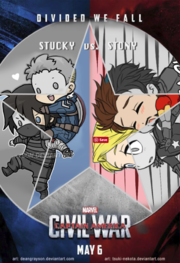 Fan art poster highlighting the ship war during the build up to Captain America: Civil War

Some fans feeling the ship war ruined their enjoyment of certain characters. allons-ymrholmes gives an example:

I completely blame the st*cky shippers for my growing dislike of Bucky. I used to love Bucky! I really did! But then tumblr happened and I see so much bs shipping crap[8]

It makes me sad how the Marvel fandom has made me dislike Steve Rogers and Bucky Barnes so much, and those two guys haven’t even done anything at all to me personally, just at times, the fandom makes them seem like the most annoying characters of all times.[9]

And some fans decided to leave the fandom all together because of the constant negativity of the ship war. Twitter user This was not the plan explaining why they left Marvel fandom:

Most of my mutuals became antis after Civil War. I mean BAD ones. Cruel ones. I was pretty much thrown out of the circle because I didn't ship ONLY Stony by that point... I quietly disengaged and left Tumblr.[10]