But the Heart is a Steve/Tony story by kahn. It was written for Avengers Big Bang 2012.[1] The story was originally inspired by an avengerkink prompt that was inspired by Tumblr posts featuring Peter Parker as Tony and Steve's adopted kid.[2]

Summary: "Okay. So. Kids. It can't be too hard, right? People dumber than us raise kids all the time. Not much to them. Just feed them, water them, distract them with shiny things and make sure they aren't unsupervised for too long. Speaking of which, how long has tiny-spawn been alone in your kitchen?" Steve and Tony (and The Avengers!) from the movie!cast + child!Peter Parker with a very AU backstory involving genetic experimentation aboard an abandoned space station (but that doesn't--strangely enough—feature all that heavily). 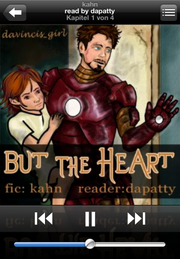 This story is amazing. The superfamily progression in this is great and I felt for them throughout this. Wonderful writing style, great plot, and awesome characterization- what more can you ask for?[5]

Steve and Tony as Peter's dads is one of my favorite plots. Also, the rest of this was a very unique idea (unique in a good way, that is). Also, I like how well the team worked together, even when not all of them were always on the front lines.[6]

Peter is just absolutely adorable, and Tony and Steve all parental and figuring things out and just being amazing parental figures but still feeling all insecure about it fjapeiojfaeljfi perfect! I love how it brings out Tony's father issues so well and how Steve can help Tony in not following in those footsteps with his faith and love in him <3 I really loved how Peter just being a kid gets Tony and Steve to be together as a couple and it all comes so natural despite how worried they are that they aren't any good at it. ANYWAYS I just wanted to say I have a LOT OF FEELINGS over this and it's awesome[7]