Tomorrow Belongs To Me

Tomorrow Belongs To Me is a Steve/Tony story by valtyr. It was written for the Cap-Ironman Big Bang 2011.

Summary: Steve wakes up in the 21st Century. He doesn't think much of it, and it's dubious about him. He meets a Norse God, joins a superhero team, and feels terribly awkward about the whole momument at Arlington he's rendered obsolete by not being dead. Meanwhile, Tony is trying to make his mark on history by being the man who finally drove Nick Fury over the edge.

made_of_tin illustrated two scenes from the story. The first one is 'The kidnapping scene' (fan comic, 5 pages), the second one is "The cellphone scene" (fan comic, 2 pages). 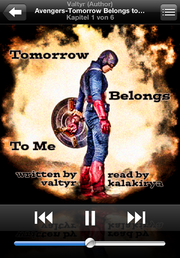 "This is probably my favorite Steve Rogers adjusts to the future fic. I loved the plot, the character voices, and Loki was kind of awesome here too. :) It's a rare story that can mix a good romance with action/adventure and make every person on the Avengers team interesting. I loved that Steve and Tony didn't hit it off right away and their interactions were so funny."[2]

"So I’m sure that mostly everyone who’s even remotely interested in Steve/Tony has already read this, but if you have not, you should go read it RIGHT NOW! Seriously, it’s 87K GLORIOUS words by one of my favorite Steve/Tony authors and continues on from where we left off in the movieverse. The characterization is totally awesome and so is the plot! I love how the author takes the hints we’ve gotten about the Avengers movie and runs with it. If the movie doesn’t live up to expectations, you know you will always have this fic to come back to. I like how Steve is settling into the present, the dynamic between all the characters in the team, and how they are all so skeptical of working with each other, but how they slowly overcome that to become a team. The relationship between Steve and Tony is perfect too! I love the ridiculous pining and miscommunication and how totally stupid these boys were being about each other because you know how much that stuff is my favorite."[3]

This may be my favorite Avengers story so far. Everything about it is terrific -- Steve and Tony and the Steve/Tony and the team building and the world-building. It is well-plotted, tying up threads from Thor and Captain America, I suspect much more logically than canon will. And I really appreciate how it rewrites canons heavy on the daddy issues into stories focusing more on the mothers -- Maria Stark gets significant mentions, and Frigga is more important than Odin here, in ways that cleverly rework Norse myth. It also has my favorite Peggy Carter post-Captain America backstory.[4]