1. What is a Big Bang Fest? A Big Bang fest is two-part: There's fic and there's art. Writers submit fics, and artists/vid makers claim them to make art or video to go along with the fics. The first Big Bang Fest was big_bang_hd, and we owe them a lot of credit for a great idea that has since spread to other fandoms such as Smallville, Supernatural, House, Heroes, SGA, Doctor Who, and others.

2. What canon can I use? So long as Tony/Steve is your main pairing you can use any canon. Movie, Marvel Adventures, Ultimates, 616, Zombie, hell you can even use the new Iron Man cartoon with teenage Tony if you can work Steve in there. 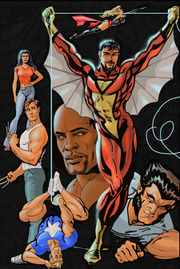 Rating: NC-17
Pairings/Characters: Steve/Tony, canon pairings
Universe: 616, set during the early New Avengers period, post Secrets and Lies. Disregarding the events of House of M; there are more mutants. Er, and Spider-Man doesn't have organic webshooters.
Beta: Offline accomplice. Thanks, Hannah.
Labels: None.
Warnings: Some dub-con. An attempted sexual assault.
Summary: The New Avengers get their powers switched around. Peter sniffs people. Steve sticks to things. Logan lies around and drinks beer. In a surprising twist, Steve and Tony make out.

Rating: PG-13
Pairings/Characters: Steve/Tony, Jan, Hank, Wanda, assorted other Avengers
Universe: 616
Beta: tavella
Labels: gender-swap
Warnings: Deals with pregnancy, abortion, and miscarriage.
A/N: The Avengers line-up in the late 80s (post Armor Wars) was insane and totally inconsistent, and tended to involve random non-Avengers people like Sue Storm and Reed Richards, and to change literally from issue to issue. Therefore, we have imposed order on it by choosing an East Coast Avengers line-up of People We Like because going with exact canon would have given us something random like "Hercules, the Black Knight, Moondragon, and Sue Storm". We're also setting this now instead of in the 80s, in total defiance of all timeline logic. Because everyone gets one Timeline, What Timeline? fic, and we figured that if there was ever a place to play fast and loose with canon or outright ignore it, it was genderswap crackfic.
Summary: Loki accidentally turns Tony into a woman. Steve is less than thrilled. Hijinks ensue.

Exactly Under the Sky fanart by skyearth85

Rating: R
Pairings/Characters: Steve/Tony, slight Carol Danvers/Jessica Drew, Luke Cage/Jessica Jones, Peter Parker/MJ, Logan
Universe: Complete AU, with ties to 616
Beta: jazzypom
Labels: AU
Warnings: Violence, Character Death (off screen)
Author's Note: Huge thanks to jazzypom, for her wonderful beta work. Title comes from a quote by Antoine de Saint-Exupery, from The Little Prince: “Wait for a time, exactly under the star. Then, if a little man appears who laughs, who has golden hair and who refuses to answer questions, you will know who he is. If this should happen, please comfort me. Send me word that he has come back.”
Summary: Complete AU; takes place in a future in which humans have begun to colonize planets, and borrows heavily from situations in current Marvel canon. New Avengers meets Dark Reign meets Firefly. Norman Osborn is ruling the (not so free) world, Tony Stark is leading a motley crew of superheroes in an attempt to regain their freedoms, and Steve Rogers may not be as dead as everybody thought.

In a Different Light by marinarusalka (Art by Norinoricat, Art by Morgan Steelgrave, Art by twins_eternal)

Rating: R
Word count: aprox. 20,700
Canon: movieverse/616 mashup; set about a year and a half after the Iron Man movie, with the assumption that the classic Avengers team was formed a few months after Tony's "I am Iron Man" press conference.
Betas: Huge thanks to my betas, linaelyn, athenejen and jazzypom. You guys rock. Also, equally huge thanks to malkingrey and red_mike_yog for patient and thorough help with the medical research. Any remaining inaccuracies are my fault and not theirs.
Warnings: language, violence and superheroes having sex
Summary: After an unexpected attack, Tony has trouble dealing with his injuries and Steve has trouble dealing with Tony. 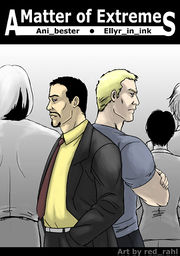 A Matter of Extremes fanart by Red_Rahl

Manuscript: ellyr_in_ink
Pairings: Steve/Tony; normal canon couples
Universe: Ultimates (1610)
Rating: This story is rated R for adult situations and language. Adult.
Warnings: Sex under the influence of alcohol.
Disclaimer: All publicly recognizable characters, settings, etc. are the property of their respective owners. The original characters and plot are the property of the author. The author is in no way associated with the owners, creators, or producers of any media franchise. No copyright infringement is intended. Believe me, Marvel owns everything. I just... well, read on and see. :)
Word Count: 37,173
Beta: jazzypom
Summary: Steve and Tony have issues, and things between them get a little... rough; also, Ultron intervenes, as it's wont to do, and only complicates things further.

Rating: PG-13
Pairings/Characters: Steve/Tony, New Avengers, Original Characters.
Universe: 616 AU
Beta: healingmirth, culurien, ginjar, and seascribe
Labels: amnesia, h/c.
Warnings: violence and mature themes (including mind control, discussion of suicide and somewhat graphic description of wounds).
A/N: The following story is the vaguely stoner offspring of comics from the '70s and Harlequin Presents romance novels... yeah, I don't know either. It follows 616 canon up to Invincible Iron Man #09, then goes violently AU.
Summary: Steve comes back to life somewhere entirely unexpected; Tony doesn't remember being a hero; something is rotten in the province of British Columbia, and the 2010 Olympics are doomed.

Sometimes You Can’t Make It On Your Own by aliana_iskassa (Art by dorcas_gustine, Art by mis_mariposas)

This time tomorrow (where were we?) by dorcas_gustine (Art by Melisus)

Rating: NC-17
Pairings/Characters: Main Steve/Tony plus Avengers and canon couples.
Universe: 616
Beta: seshat_maat, pandanoai and neptunedream. They were great help, this fic is theirs as much as mine. And also thanks to all the people who let me whine and moan in IM and my lj, thanks guys, it's been a fun ride. :D
Labels: N/A
Warnings: Slightly dark in places, because Steve and Tony have Issues (but then again, I wrote this fic, so everyone has Issues in this one). Also, refers to abortion. Liberal use of italics.
Summary: Tony goes to see Wanda, and suddenly Steve is alive and there are Skrulls! Or maybe Tony is just going crazy. Nothing happens in this fic, until the very end. Seriously. There's a lot of talking, mostly at inopportune moments, Tony's views on the acceptable gifts to give people are slightly different from everyone else's and he spends more time than would seem necessary being (half-)naked. What else is new? 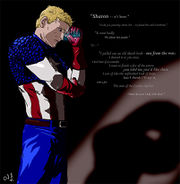 What Tomorrow May Bring art by oddwildflowers

Rating: PG
Pairings/Characters: Steve Rogers/Tony Stark, some Avengers and some Bucky and some Fantastic Fours and some Hulks.
Also: Wolverine
Universe: 616
Betas: dorothy1901, dieewigenacht, onewayfreak. This is the first time I ever attempted a fic of this size and it would not have happened for these people and if they weren't goddamn ROCK STARS. You don't want to know what a mess this would've been without them.
Warnings: Relatively Skrull and Dark Reign compliant. Boy kisses.
A/N: :D
Summary: Months after his return back to life, Captain America and Iron Man are kind of estranged, but problems with SHIELD and Tony's life in general get them to work together and fall in love. <333