The character is a conscious echo of, or homage to, Arthur Conan Doyle's Sherlock Holmes.[1]

The show takes place in the present day, in a fictional hospital in New Jersey called the Princeton-Plainsboro Teaching Hospital (PPTH). Each episode is framed around a freak of the week-style mystery illness, which House must identify in order to save his patient's life.

'House' focuses mainly on its central character and the people he most frequently interacts with: his boss, Dr. Lisa Cuddy; his best (only) friend and colleague, Dr. James Wilson; and his Diagnostics team, consisting of Dr. Foreman and three fellows: Dr. Hadley, Dr. Kutner and Dr. Taub. House's former team members Dr. Cameron and Dr. Chase have moved to other departments but are still resources for House.

Several of the show creators and writers are the object of much attention and discussion in fandom. For example, show writer Doris Egan has been nicknamed as "St. Doris" by House/Wilson fans, and show creator David Shore has been RPed on livejournal.

'House' is a kind of medical Murder She Wrote. Each episode (generally) contains (at least) one medical mystery to solve. Meanwhile, character interactions and bits of character backstory — the kind of material for which many fans are avidly watching — is doled out over the course of multi-episode arcs.

Some of the diagnoses are fascinatingly bizarre. Others are so often-suggested that they've become a show in-joke; there are a variety[2] of House Drinking Games[3] which instruct viewers to drink every time "lupus" or "vasculitis" is mentioned, or every time House ogles Cuddy's breasts. 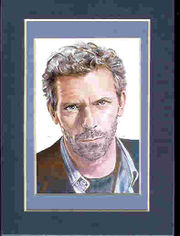 art by Suzan Lovett, larger version is here, where it is listed for sale.

There are numerous pairings in the House fandom, some of the most popular ones being: House/Wilson, House/Cuddy, House/Cameron, House/Chase, and House/Foreman. There are also a couple of popular trios, among them House/Wilson/Cuddy. Various LJ communities and other fan forums have been created to discuss these pairings and create fanworks which explore their relationships.

Fans have developed a variety of names for House's diagnostic team, among them "Cottages" (little houses) and "Ducklings" (because especially in early seasons they followed House around like ducklings follow their mama duck.)

Some fans have suggested that Foreman, Cameron, and Chase are meant to map to House, Wilson, and Cuddy — that the three younger doctors display the same character traits and foibles as the older ones.

The House fans are a very excitable bunch. They are dedicated to their show ... and to their pairing. Whether to ship House/Wilson, House/Cuddy, or House/Cameron has been a friendly but passionate debate for several years - complicated by the addition of three new characters in Season (?) to add to the 'shipping mix. No one seems quite sure regarding the relationships of the House characters - especially the writers of the show who have admitted they enjoy being ambiguous about who likes whom.

House/Foreman doesn't seem to have the same following as either the fandom's primary slash pairing (House/Wilson) or its primary het pairings (House/Cuddy and House/Cameron.)

Introductions to House fandom on other websites 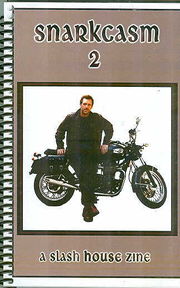 cover of the zine Snarkcasm #2 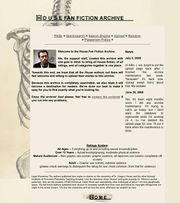 screencap of Cat's in the Cradle