A drinking game is when a group of people sit around and rapidly consume alcohol. The fannish version is usually tied into taking a drink when their favorite TV characters or shows engage in repeated acts or too familiar dialog (ex: the classic line from Star Trek, spoken by Dr McCoy: "He's dead Jim.") 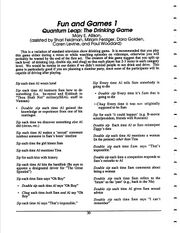 the first page of a 1993 Quantum Leap drinking game, printed in Chain Reactions

Fans would sit around the TV, watching the show, glasses in hand, each one trying to be the first one to notice stereotypical behavior that called for a drink. The rationale was always that a good episodes would have few drinks, and a bad (3rd season?) show could put you on your lips in an hour. The game was always half pre-made rules, half on-the-fly consensus, so calling out a drink for something not on the list would be agreed with if it fit the profile. (I have noticed the amount of drinking going down in fandom, so this can be played with non-alcoholic liquids; this just cuts down on the difficulty level nearer the end of the episode.) [3]