You may be looking for "Remote Control," the Star Trek story by Jacqueline Lichtenberg in Interphase.

Be alert: some of the issues are incorrectly labeled on the covers.

There is also a special issue called Remote Control Goes to War. 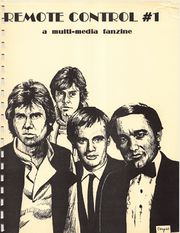 The first print run was 450 copies.

This zine has traveled a long, hard road to publication, what with a hard disk crash (which took most of the zine with it, and taught me a hard lesson — MAKE BACKUPS!!!), innumerable health problems [...]. and a downed copier. You've heard of Murphy's Law? Murphy was co-editor on this zine.

It's been a long time between the first announcement for RC appeared in the adzines and its eventual publication. But I think the wait has been worth it. This zine has a rather diverse mix between its covers, contributions from new faces and more well-known fans ranging from vignettes to a full-blown novel. No matter what your fannish preferences may be, I think you'll all find something to enjoy here.

Remote Control 2 was published in 1992 and contains 250 pages. It won a 1993 FanQ and a 1991 STAR aWARd for Best Multi-Media Zine. Covers: Christine Myers (front cover), Jeanne McClure (back cover). 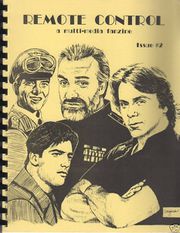 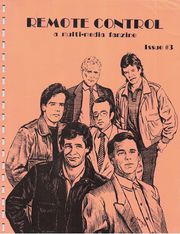 Welcome to Remote Control 3! We have a slightly different mix this time out" some new faces are writing and new fandoms are represented within these pages for the first time. New fandoms include Indiana Jones, The Professionals, Buck Rogers, Hawaii 5-0, Batman, Simon and Simon, and The Young Riders. Then we have the old reliables - Star Wars, Man from UNCLE, Alien Nation, The Real Ghostbusters, War of the Worlds, Wild Wild West, Magnum PI, and Rat Patrol ~ in short, a little bit of everything!

The cover is a bit misleading - at the time it was commissioned, I expected to have a Wiseguy story, and based my instructions to Chris on that expectation. Well, due to a mishap with the author's computer, neither it nor the QL story she'd wanted to do made it in to this issue ~ but, with any luck, they'll be in next time.

It's thank you time... Thanks to my contributors - without you guys, there wouldn't be a zine to edit and publish. I especially thank you for sending in final drafts on disk, or via GE-mail ~ my hands love you for it. Thanks to those of you who voted in the Fan-Qs for the first issue of this publication ~ I cherish

that award more than you know. And more thanks to those of you who nominated Issue 2, as well. Thanks to the gang on GEnie, who listen to my grousing and grumbling when things don't go quite right, and who pat me on the back when they do. And special thanks to my husband Bob, who cleans, cooks, and feeds me during zine production time ~ I couldn't do it without you, Hon. 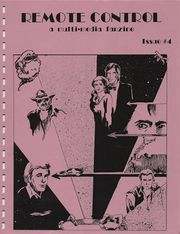 cover of issue #4, not credited

Welcome to Remote Control 4. This is the biggest issue yet! We have more shorter pieces this time out, plus a few meatier long stories to balance them out. It's also the GMTA issue ~ Great Minds Think Alike. There are several pieces here from the same universes - -

Quantum Leap, Blake's 7, Wiseguy. Serendipity or collusion? I have to think about this....
Remote Control has again been nominated for a Fan-Q. award, as Best Multi-Media Zine. Many thanks to those of you who nominated it, and thanks also to those of you who voted for it in last year's awards. Issue 5 is now open for submissions. Anticipated publication date is May, 1995, with a traditional MediaWest debut. 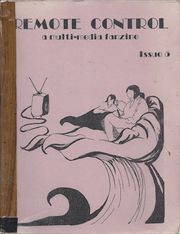 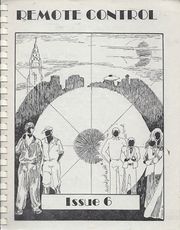 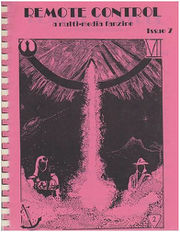 The art is by C.L. Wessel, SMAP, Barbara Eickhoff, and L.C. Wells. 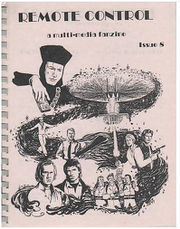 The art is by C.L. Wessel, L.C. Wells, Barbara Eickhoff. 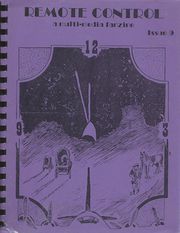 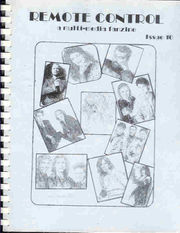 [Fatal Images]: I like crossovers, when I know at least one of the series in question. In this case, it's Highlander (though I'm starting to get to know RGB because of other crossovers I've read...). This was a well-done how-to-save-Richie-from-Archangel story, which actually makes a lot of sense, tying up the loose ends and making Archangel make more sense too. How do the Real Ghostbusters come into it? Well, there's a demon involved, isn't there? The opening of the story was particularly atmospheric... The wind drove him crazy. It was always there, never stopping, never fading away, wailing between the rock spires, sliding off the crags, masking the sound of threat, the warnings of danger. It tugged his choppy hair, cut through the thin cloak he'd managed to acquire, and rattled off his blade in its makeshift sheath, forcing it between his legs and tripping him when he was least expecting it. The one thing that bothered me a little was that some of the characters seemed just a bit too insightful, seeing things that I couldn't quite believe would be seeable, but maybe that's just me. On the upside, it was lovely and long (hey, I like long stories!) [1] 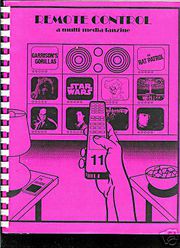 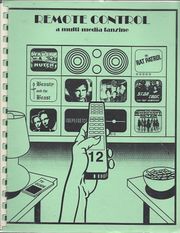 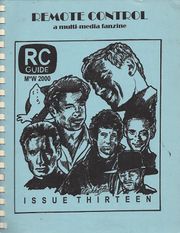 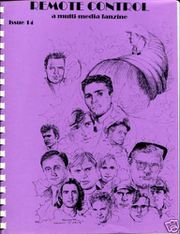 Remote Control 14 was published in November 2000 and contains 217 pages. 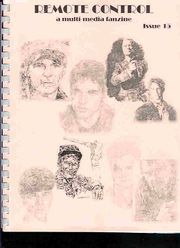 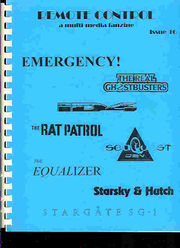 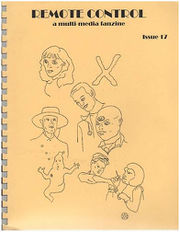 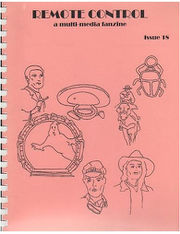 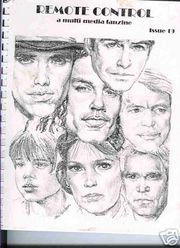 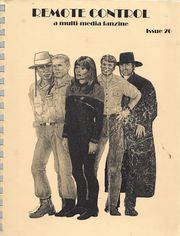