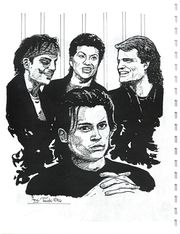 cast of the show, from Wild Cards #4 by Angi Towski

The series spawned a small fandom for mostly slash works. Booker/Hanson was a popular pairing despite Booker only appearing in 18 episodes. Other slash pairings were also somewhat popular, and some het fic with Judy and OFCs was also written.