Uncharted Waters is a slash multimedia fanzine. It was published from various addresses in the UK between 1988 and 1997 by Sue aka The Android under the imprint Crevichon Press.

Uncharted Waters was published in 1988 and contains 50 pages. It was later reprinted in the USA and again in the UK in 1996, both times under the altered title Uncharted Waters 1

[Coign of Vantage]: It also brings to mind a question: is there fan fiction based on this [Morgan's Boy] story? Other than the story in Uncharted Waters that made me feel uncomfortable. [1]

Uncharted Waters 2 was published in 1990 and contains 100 pages.

See reactions and reviews for Inside Information. 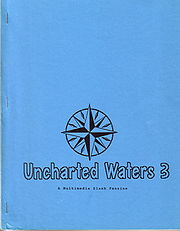 Uncharted Waters 3 was published in 1990 and contains 100 pages.

Uncharted Waters 4 was published in 1991 and contains 100 pages. 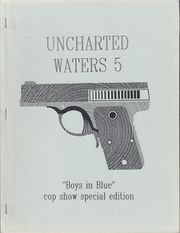 Uncharted Waters 5 was published in 1992 and contains 100 pages. It is subtitled "Boys in Blue" cop show special edition".

See reactions and reviews for Cause For Concern. 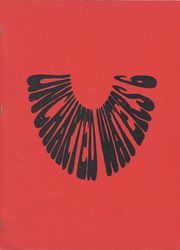 Uncharted Waters 6 was published in 1992 and contains 100 pages.

Uncharted Waters 7 was published in March 1993 and contains 100 pages.

See reactions and reviews for Head and Heart. 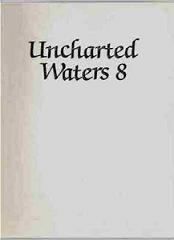 another cover of issue #8

Uncharted Waters 8 was published in September 1993 and contains 100 pages. 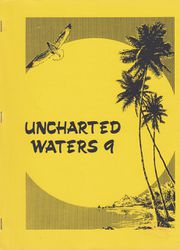 Uncharted Waters 9 was published in 1993 and contains 100 pages. 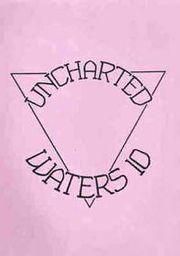 Uncharted Waters 10 was published in 1994 and contains 100 pages. The story summaries for this issue are from On the Double.

See reactions and reviews for No Strings.

Overall impression: Very plain layout. No illustrations. Nice, readable text throughout. A few typos, but not too many to be distracting. No poetry. I've read one other issue of this zine, because it had a surprisingly good Captain Scarlett(!) saga in it. I like how it tries to go for the more obscure shows, multi-fandom slash slut that I am. I did not read the North and South or Moon & Son stories, not being familiar with these shows. Final verdict: at $9 for ~100 pages, it's not a steal, but it's not prohibitively expensive. The problem with multimedia zines is you rarely find one where you like all the fandoms. If you're just interested in the Pros story, I'd say give it a miss. As the Moon & Son story is 30+ pages, this may be just the zine for fans of that show (whatever it is!). [2]

See reactions and reviews for Painting the Clouds.

The most recent issue in the Uncharted Waters series of zines opens with a story based on the BBC Secret Army series. Out of the Nightmare (26 pages)'by Sal, is the only Secret Army slash I've ever discovered. There doesn't seem to be a lot of slash potential in the series, and Sal's story is an alternative universe scenario, in which she pairs off two characters who never met on screen. The lovers are Hans Dietrich Reinhardt, a German Officer, and Nick Bradley, (also known as Luc DeVriendt) a British Agent working undercover in occupied Belgium. Now I have to admit that Reinhardt was my all time favourite Secret Army character. Instead of being a sadistic, and stereotyped, thug, Reinhardt was portrayed as a complex human being. He was a German war hero who had been wounded on the Russian front, and who may have been involved in the bomb plot against Hitler, and in the series he comes to a tragic end. What more could anyone want in a hero? And for those of you who were at the 1994 Devacon discussion on war and slash yes it's the jackboots! As to Nick Bradley I have to confess that I don't even remember who played the role or what he looked like. But Sal creates such a well rounded character that it really doesn't matter, and by the end of the story I was routing for him a s much a s for Reinhardt. Her story spans a three year period, from 1942 to 1945, and she weaves a realistic story of love a n d divided loyalties, against a background of war. It is wonderfully romantic without ever being sentimental, and I loved every word of it.

Ticket to the Moon (14 pages) by Sharon Mills, is based on the Top Gun film. It is in fact a companion piece to Miramar the Quantum Leap/Top Gun crossover story by the same author, which appeared in the Crevichon Press, Leap in the Dark zine. This time the story is told from the point of view of Mitchell and Hetherly, as they face the realisation that their love may cost them their careers. If you haven't read Miramar this story stands on it's own, and if you have then Iguarantee that it's not boring. Unlike a lot of slash this story does have a plot, but it was the characterisation and emotional content of the piece that really appealed to me.

Moment of Truth (15 pages) by Katy Katana is a Dr Who slash story, and a sequel to her Ring of Truth, which was published in Uncharted Waters 10. However you don't need to have read the first story to understand this one. The story is set just after the end of The Five Doctors, and tells of the reconciliation between the Doctor and his old enemy the Master. The Doctor and his companions find themselves on an island in the Archipelago, about 3000 BC, and the Master is waiting for them there. He tells a tale that the Doctor has forgotten, of two young Timelords who loved each other, and of how Borusa (the baddie of The Five Doctors) tricked him into betraying his lover. Once the Doctor's memory has been restored they at last have a chance to re-establish their relationship, and reclaim their inheritance.

I found it difficult to get into this story as I never could stand Peter Davison's Dr Who, and I also felt that it was handicapped a bit by being the only science fiction based piece in the zine, since the other stories all had a far more realistic background. But those quibbles are external to the actual story which is written to the same high standard as the rest of the zine, and which contains some lovely moments. I particularly liked Katy's descriptions of the Master's gradually changing appearance, and Tegan's reactions to him.

Painting the Clouds (37 pages) by Calliope, is a Professionals circuit story, and one which came as a very pleasant surprise to me. For a start I don't like B/D stories, and secondly I groaned when I read the description of the story on the contents page of the zine. Stories where partners have to pose as lovers having been done to death in about every cop show fandom there is, and a few science fiction ones as well. But Calliope really makes the scenario work. There is a plausible reason for Bodie and Doyle having to go undercover as a couple of gay musicians, and because this is a long story their own real relationship has time to evolve slowly. There are some nice little humorous moments in the story, but the depiction of the criminal underworld is quite hard hitting and realistic, though there's no graphic violence in the story. I'm still not a B/D fan, but this story drew me in. While I was reading I found that I really wanted them to fall in love and live happily ever after, Calliope made me care what happened to them, even though I don't like the characters.

That's it then, only four stories, but as they say it's quality that counts not quantity. All four stories are written to a very high standard indeed, and all four have happy endings. Yet they are not sentimental or trite endings. The first three stories leave the lovers not just together but about to embark on new lives together, Reinhardt and Bradley in post war Europe, Hetherly and Mitchell outside the US Navy, and the Doctor and the Master back on Gallifrey. My advice is read the zine and then start pestering for the sequels. [3] 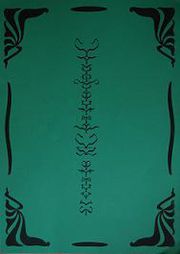 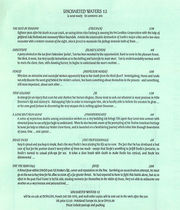 Uncharted Waters 12 was published in March 1995 and contains 100 pages. 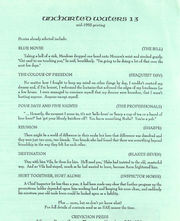 Uncharted Waters 14 was published in November 1995 and contains 100 pages. 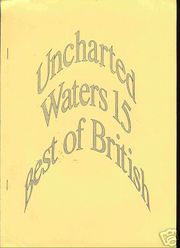 Uncharted Waters 15 was published in 1996 and contains 100 pages. It is subtitled Best of British.