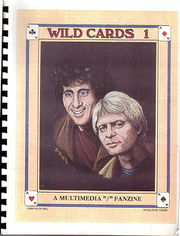 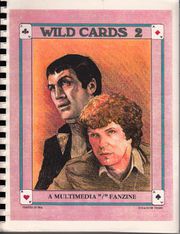 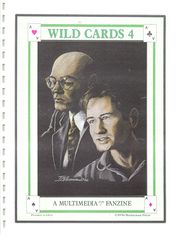 When I got this zine in May I decided not to review it because I haven't read all the stories and wasn't likely to. Then I mentioned that it had some Mulder/Skinner stories in it and some people asked for info on it. So consider this half-way between an infomercial and a review.

As always the following comments are my opinions and mine alone. I expect no one to consider them dictations of my admittedly sometimes picky mind. If someone disagrees with any of the following observations, please, please, *please* post your own views. I always like hearing what other people have to say, too. And if you happen to agree with anything I say...are you sure you're feeling okay?  :-)

Overall, the zine is okay. That's about all I can say. Most of the zines put out by this press neither impress me, negatively or positively. If you have a craving for anything in a specific fandom, this is probably good for that at least, but if you are looking for great fanfic, it's generally best to move on. With possibly some minor exceptions.

"Ante Up" (21 Jump Street) by Robyn LaSalle--According to the Author's Note this takes place around the time of the episode "Loc'd Out". I'm not sure that makjes any difference at all. This basically just seems to be an excuse for Hansen to have sex with everyone--seperately. During the same poker game.

"Sonny Crockett Boogie" a filk by Le Mad Artiste--This filk gave me a giggle, but I don't think it'll make much sense to anyone who hasn't seen Edward James Olmos' movie ZOOT SUIT and heard the song "Marijuana Boogie".

"El Dia de los Muertos (The Day of the Dead)" (MUNCLE)by Debbie Rojano--Having experienced MUNCLE as published by this press before and been far from impressed by it, I skipped this one. I'm on a low wussification tolerance mode at the moment.

"Key West" by Robyn LaSalle (MV)--My initial reaction is, "been there, done that". Sonny and Martin go undercover at a gay resort and have to pretend to be lovers. If you want to see this done better, read the S/H novel "Murder on San Carmelitas" and if you insist on reading a MV story along the same lines, I know there was at least one other of these all ready. (Sorry, can't remember where. LIASONS, maybe?)

"Confessions" by Methos (Cadfael)--I've never seen the show and have very little referrence to even begin to understand it, so I skipped this one as well.

"The Log Dream" by Buddy Cole (TWIN PEAKS)--This is based on the Pear Dream skit from THE KIDS IN THE HALL. Again, it's kind of cute, but I *know* this will make no sense to anyone who hasn't seen the reference material.

"Original Sin" by Robyn LaSalle (THE X-FILES)--This is the first of the Mulder/Skinner stories, this one taking place immediately after the episode "Paperclip". I think the main problem with most of the stories like these is that it just doesn't sound like Mulder and Skinner, especially Skinner. This does at least do better at making an attempt at explaining why they are together than others.

"With This Ring" by Mirenna (21 Jump Street)--It's gag me sappy and in a fandom I only have a peripheral interest in--very peripheral.

"The Hatred of a Minute" by Robyn LaSalle (S/H)--My biggest problem, I think, with Robyn LaSalle's writing is that it definitely leans towards the sickeningly sweet and in a fandom like STARSKY & HUTCH which tends to lean towards that direction, it just makes it worse. I also think that most for most of her stories you could interchange the characters from any of her other stories in any other fandom. This is better than most, but it's the best I can do.

"Paradox" by BOB (TWIN PEAKS/X-FILES)--Okay, it's been a long time coming, it's a Cooper/Denise Brycen story! It's also been a long time coming for a TP/XF cross. But if you're looking for a *good* TP/XF story or a *good* Cooper/Denise story, I'm afraid you have a longer wait coming because this ain't it. Fox Mulder *is* Denise (Denise/Dennis is his 'female' persona)? I don't think so...

"Addendum" by Robyn LaSalle (X-FILES)--A much shorter (only three pages as compared to the other which was 28pp.) Mulder/Skinner story. Not too bad. This takes place after the episode with Skinner's wife.

"Different Corner" by Robyn LaSalle (RENEGADES-Kiefer/Lou)--This is a reprint from INTERLUDES 1, their own K/L zine. It's one of the so-so stories. Not something bad, but not great either.

Their prices listed are $22 (USA) and $25 (Canada). Sorry, no postage listed for overseas. I will warn people, too, that this press has something of a reputation as being pretty bad when it comes to filling out orders via mail. They take forever and there are people who have waited for a couple of years to get their zines still are waiting. There is a lot of different artwork scattered throughout the zine by different people with different fandoms as the subject--some who aren't even represented in the zine by any stories. (There is at least one regular picture and one cartoon for DEPT. S, for instance, but no stories.) The zine is approximately 185pp and is, for the most part, double-columned. [1] 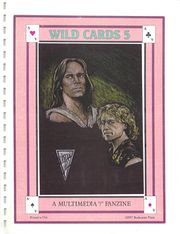 issue #5, cover of Hercules and Iolus by KOZ

Wild Cards 5 was published in April 1997 and contains 224 pages. The art is by KOZ (front cover), Angi Towski, Seraph, and Jung.

1997 is revving up to be a good year, zine-wise. By February, we were juggling four in stages of layout. By our big annual convention, MediaWest*Con, we'll have a total of eight new publications for the table!. This year, we move up from the wonderful Gateway 486 to the Gateway Pentium, again thanks to our dear friend, Cavebear who continues her quest for the Ultimate Computer. This new machine has a CDROM, so we're anticipating trying out new programs that will continue to improve the appearance of our zines. This is the last Boadacious Press zine that will be produced on Jazz Man (the 48). Christopher (the Pentium) takes over from now on. We've had a terrific surge of interest and have been very active in online fannish activities and communication. Cyberspace was absolutely the best invention that could have come along for us, as we are now in contact with fans and subscribers from all over the world on a daily basis.