Hungry Hearts is a slash anthology edited by Dovya Blacque.

From Media Monitor #34: "More adventures in MerLyn's MIAMI VICE/"Psychic Vampire" universe! You must send for guidelines before attempting to write in this universe. The specifications are complex, but not unworkable! SASE for guidelines."

Yeah, there was a whole series. It was a girl in England who started writing these psychic vampire stories in which— She based them on Bruce Springsteen titles, which also caught my attention, because I adore him. And she had nowhere to publish them, so she asked me if I was interested. She sent me the first two, and— The first one is how Crockett and Tubbs — I mean, I'm sorry— Crockett and Castillo — get— Discover that they have this thing in common, where they are able to draw energy from other people. And there's a way to do it where you will kill the person, and one where you won't. So there— Throughout the universe there were rogues, who could do damage to other people, and Crockett and Castillo kind of ended up being the, ah, den mothers? And it turned into this huge crossover universe. We brought in other characters from Miami Vice, like the character of Gilmore. And when they were doing— It was during a trial pilot kind of episode, where they were going after a younger unit. So there were, like, kids— officers that looked like high school or college kids. Sort of like— 21 Jump Street, Miami Vice style... There was one character on there named Joey Harden, who was in another episode also, and Sue picked up on this. And she ran with that and brought those two in as a couple, and then, I mean, Wiseguy even got dragged in eventually, by me. It was just this huge community of psychic vampire stories, and they are spread out throughout the various Dyads, to a point. And then I decided, there's so many people wanting to write this that I have to do a zine dedicated to it. And it's called... Hungry Hearts, is what I called it. Another Bruce Springsteen reference. And then I found myself having to draw charts, and timetables, because I couldn't have people crossing over— you know, counteracting someone else's story. I did two issues of that, and it was fun. It was really fun. But it kinda petered out. [1] 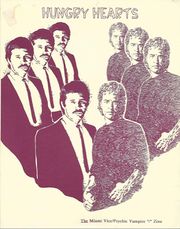 cover of issue #1, Cooper and Alayne

Hungry Hearts 1 was published in 1993 and has artwork by Cooper and Alayne and Todd Parrish. It contains 146 pages.

"This zine will include synopses of the first eleven psychic vampire stories which appeared in various issues of DYAD as well as a "cast of characters" (including, when possible, actors who played the part) to make it easier to keep track of who's who even if you've never heard of the characters involved in the story!" 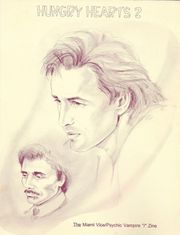 "This zine will include synopses of the first eleven Psychic vampire stories which appeared in various issues of DYAD as well as synopses of the eleven stories which appeared in HUNGRY HEARTS #1 and a revised "cast of characters" (including, when possible, actors who played the part) to make it easier to keep track of who's who even if you've never heard of the characters involved in the story!"