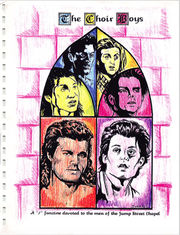 The Choir Boys is 112-page long slash 21 Jump Street anthology. The cover subtitle, "A '/' fanzine dedicated to the boys of the 21 Jump Street Chapel."

The art is by Jung (front cover), Angi Towski, KOZ, and Seraph.

From a 1993 ad in GAZ: "Color cover by Jung. Eight stories by award winning "/" author Robyn LaSalie, a varied menu in the style of the popular series. Mostly Penhall/Hanson, with Booker/Harry, and even Joey/Mac (Fifth Season). Featuring the beautiful artwork of award-winner Koz, and Angi Towski, Jung and Seraph. Poetry by LaSalle and rj burnett."

A Second Issue Was Planned

From a July 1993 ad in GAZ: "Color cover by KOZ. Accepting submissions featuring pairings from any season. We do not discriminate against final season here. We love the DeLuise family too much to ignore Michael's portrayal of Joey Penhall. And Bendetti's performance as Tony McCann grew on us very quickly. So don't be shy! Artists! Art! Still open for submissions."

Well. You know... we've been watching this show for some time now, finaly decided to tape it. Naturally, when we made that decision the show only lasted for five or six more episodes. Typical- It's taken us a little while but we now have at least 50+ of the episodes, and intend to get the complete series.

Now, some of you are familiar with Robyn's work through Rose Tint My World, our romantic U.N.C.L.E. zine; One Night Stand, an U.N.C.L.E. "/" novella, for which she won her first Fan Q Award; Interludes, her own zine devoted to Sutherland/Philips pairings; and through Dyad from MKASHEF Enterprises. As a matter of fact, it was the editor of the last zine, Dovya Blacque, who first gave Robyn the opportunity to publish some of her Jump Street work.

When we decided we wanted to do The Choir Boys, we knew that we would have trouble getting submissions for the first issue. Robyn made the decision to write all the stories in #1, so we could get it out and folks could see it. What we're hoping is that more 'Jumpers' will peek out and the. next ish will be filled with fiction by many writers. So, no, this isn't just Robyn's way of showing off. It's our way of getting the fanzine in front of you, so many of you will be inspired to write. Yeah! Inspirational! That's what this is! (Halos appear now, although slightly off-kilter).

I don't think you'll be disappointed with these stories. Robyn has a sensitive way of picking up on these boys -- or any others she writes about, for that matter.

Many of you are, no doubt, familiar with the art of KOZ. This artist has appeared in many fanzines in the last three years: our own Rose Tint, City of Byzantium, Dyad, Professional Dreamer, Chalk & Cheese, Miami Spice, and many more. Her definitive romantic style is known in such fandoms as U.N.C.L.E., Professionals, Miami Vice, and now Jump Street. She has made a name for herself in the "/" genre and we're happy to have her represented here.

Another name you're familiar with is Angi Towski. Angi has been seen in Rose Tint, Interludes, Miami Spice, Dyad, and now here. Angi's trademarks are steamy kisses and humorous illos. We have the pleasure of having both artists on-staff here at Bodacious Press.

We also welcome newcomers Jung and Seraph to our pages.

On a side note, from Robyn: the police brutality incident in "Hey, Mistah!..." was actually witnessed by us during a trip down to Mardi Gras this past February. While we may be fans of cop shows, this kind of thing is serious... and it's not pretty. This is Robyn's way of bringing it to light.

So, here you go. One zine full of stories about the various male pairings possible on the series. I know.. .I know.. .we're helpless sluts. But there's so many beautiful boys on that series! What can the habitual slasher do?!

So go! Read! Have a good time. At least it's keeping you off the streets.

"Hi, I'm Tommy Hanson" is meta. It is a plea for fans to not buy bootlegged zines, and written, supposedly, by one of the characters in the zine. 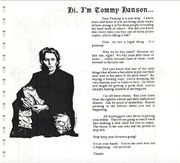 Zine Pirating is a real drag. I know more and more of you are being made aware of how wrong it is for these people to bootleg the hard work of others. But did you know that ever)' time you buy one of these pirate copies, you're taking a risk?

Naw, its not a legal thing. It's personal.

Why do we buy zines? Because we like 'em, right? We buy issue after issue of some - really become fans of them; look forward to the next one.

Did you know that one of the only things that allows a fan editor to put out their next zine is the sales of the prior issue? By buying a bootleg copy, you're dooming the very fanzine you've come to love. So while you might be getting a great deal, you're actually hurting yourself in the long run.

Cut off these cheats. Buy your zines from the rightful editors and their authorized dealers. Ask for proof of dealership. Report pirating to the editors when you see it happening.

All bootleggers care about is getting your dollar. They're not going to turn it back into making a new issue for you to enjoy.

The buyer is the one who has the power to stop this.

It's in your hands. You're the ones who see it happening. Get involved.

Hanson and Penhall go to a slash convention called "Concupicense IV, a multi-media event" in order to make a bust regarding someone selling SAT test answers. 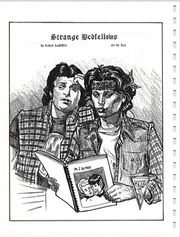 KOZ, characters read a copy of As I Do Thee at a fictitious slash con

There they meet Starsky & Hutch and other slash fans, watch a Trek music video, confront a zine bootlegger named Rhonda Liddy, win the costume/skit contest when they catch an actual real murderer, hang around the dealer room talking about slash, and meet a real life same sex couple!

Doug plucked up a plastic badge by its metal backing, turning it to read its front. '"CONCUPISCENCE IV!'" he boomed, then ducked when he realized that he had been a trifle loud in the otherwise vacant lobby. He peered closer at the badge. "Hey — ain't this that Ill)'a guy from that one spy show?"

"B/D??" Doug blinked. "Correct me if I'm wrong., .but doesn't that stand for bondage and discipline?"'

Tommy stared at him, disgust etched into his expression. Penhall shrank back, blushing scarlet; he fussed with his badge, pinning it to his Harley-Davidson tee.

Returning to the book, Hanson read on. "There are panel discussions going on all through the weekend." He snorted. "Listen to these topics. 'Do We Always Hurt the Ones We Love?' 'Catherine or Diana? Who Cares!' 'The Varied Forms of Slash Fandom.He frowned. "Slash?"

Doug shrugged. "Maybe it's somethin' to do with knives an' such. Or Freddy Kruger."

"Mm." Hanson nodded in agreement. "'Psychic Healing.' 'How to Produce Your Own Fanzine.' 'Hurt Em and Hurt Em Right: a Medical Research Panel.'" he shook his head at that one. "'Zine Pirating and What to Do About It.' 'K/S and Other Partnerships.' 'Media Sluts' 'How to Make a Music Video." Sighing, he dropped the book and leaned back. "I don't think we're in Kansas anymore."

He found Hanson down near the Video Room. The slender cop was peering in at the large screen, mesmerized by the clips from assorted television shows set to romantic pop songs. At present, it was a very touching STAR TREK collage, set to the Broadway musical piece. Memory.

We also know you're lovers."

The piece of bread and the knife Doug was using to butter it flew into the air and hit the floor on either side of his chair.

A passing waiter picked up the items, murmuring politely that he would fetch replacements. Hanson found his voice first. "H-How...?"

"...did we figure it out?" Dusti finished for him. She shrugged. "Easy. We're into law enforcement slash. We've watched enough cop shows to recognize an undercover job." She grinned slyly, leaning fcrward as she lowered her voice to a conspiratorial whisper. "The lovers thing was just a hopeful guess — but from your baby's response, I'd say we hit the nail on the head."

"Yeah," Dusti added. "You gave away the faa that you're cops." She smiled smugly, sitting back in her chair, "Chill out, guys. There's nothing wrong with what you are. We don't mind that you're fuzz, and as for the other thing,..." Looking pointedly at Angela, she reached over and covered her hand, entwining their fingers. Meeting Hanson's stare, she annotinced proudly, "Ange and I have been a team for seven years, now. She's my wife."

"A husband is a man, honey," Dusti said. She then held out her arms, indicating herself and her companion. "Do either of us bodaciously-endowed women look like husband material to you?"

Angela raised her eyebrows. "Are you guys saying you don't know what slash is?" she breathed. "We've been hearing that word a lot," Tommy admitted. "But, no."

"What is slash?" Penhall asked.

Dusti shrugged. "Put simply? It's gay fan-fic. Stories written by the fans of any given show, wherein they put two male charaaers - like Kirk and Spock, for example — into a sexual relationship."

"With who?" the beefier detective queried. "With each other."

He shook his head, blinking in amazement. "Don't the people who did those shows -- the actors, the writers - don't they get mad? Or don't the)' even know?"

They get a kick out of it. from what I've heard. Now, David Soul and Paul Michael Glaser once got mad when they found out that fans were interpreting their work this way."

"Then they shouldn't have encouraged it," Angela sniffed. "All those behind-the-scenes shots of them groping each other, tongue-kissing.. .and the bloopers, where they're going down on each other!" She laughed haughtily. "They made their bed."

"SATs??" She retreated with a puzzled expression. "Is this some kind of joke? What're you talking about? I deal 'zines. Out-of-print 'zines. That's all."

Tommy, perusing her rack, frowned and pulled up a copy of a publication entitled 'MATES.' The lettering was in gray tones but decorated as if cut from a British flag. Beneath it was a drawing of two men, one with curls and the other with short-cropped hair. "This is out-of-print?" he asked, showing the copy to her.

Hanson sneered. "Uh-uh." He put the book down on the table. "Because I happen to know that the people who are doing this 'zine just premiered it — at this con. And the letters are in color, on the original cover." He nodded to the table. "I'm confiscating your supplies, lady. These are bootlegged copies."

"What?! You can't do this!" Around them, several people stopped upon hearing the commotion. Hanson motioned to his partner. "Get the boxes under the table; start filing them."