Turn of a Friendly Card 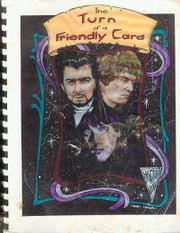 Turn of a Friendly Card is a original slash novel, one of three in a series by Robyn LaSalle in The GESE Universe (the Galactic Exploration Society of Earth).

Art is used on Fanlore with the permission of the publisher and artist.

Fandom characters fan casted in this series are from The Professionals, Starsky & Hutch, Kiefer/Lou, Man from U.N.C.L.E., The Sentinel, Ladyhawke, 21 Jump Street, Miami Vice, and others.

The following is a list of important characters, and who "plays" them.

An alternate universe, multi-fandom crossover with a science fiction setting involving space travel and wolflike creatures. The Pros characters are presented as Raimon Autumnwolf, who is searching for his missing mate, Beauxde' Ravenswood, who has possibly been kidnapped. All the characters are inspired by media ones, but without their identities. [1]

Some time now, friends have urged me to write for PROS fandom. Well, I decided to give it a go. But what you hold in your hands was not going to be my first PROS venture. I have another story, Shepherd Moons, which I thought would be out a while ago...but you know how Real Life can interfere with fannish endeavors....

The Turn of a Friendly Card was something I just had to do. I wrote much of it several years ago actually, but never finished it. It's always been pretty special to me, and since I couldn't let it just rot in a file drawer, I decided to share it with others. I'm no stranger to B/D; I've read some of the best-written stories in the genre. I enjoy the A/Us more, especially when magic is involved. And like many other fans I particularly love lots of steamy love scenes. Turn... is set in a sci fi universe I created, taking place around the year 2788. Contact has been made with other lifeforms, and space travel is prevalent. Like STAR TREK, there is an alliance of planets, governed by a type of Greenpeace/United Nations/National Geographic council and its fleet. But instead of armies of soldiers, the fleet is comprised of scientists and explorers: the Burton/Speake or Stanley/Livingston types who meet new people and discover new wonders in the galaxy. I've written other stories set in this universe, using other "couples" in Fandom. My I/N (Illya/Napoleon) version appears in Karmic Concurrence 2, and I intend to have a C/C (Crockett/Castillo) tale in Miami Spice 4. If you enjoy this story, you might want to check out the others, too. I wanted to satisfy a few fantasies and wet some appetites. In Turn..., you'll encounter characters hailing from different worlds, races and religions. But you'll also find many very familiar problems, fears, and desires. My feelings about aparthied [sic] and the subjugation of native peoples is represented, as is my dislike of bigotry, and my passion for various beliefs. Some things, regardless of species, are as universal as love itself. There's something of a message, too (borrowed with great respect from Alan Parsons). "The game never ends when your whole world depends on the turn of a friendly card." There's no shame in admitting defeat, just as there's no honor in a hollow victory. And sometimes surrender is the only way to win. But you can't win if there's no one to play the game with you.

In closing, I would like to express my gratitude to KOZ, whose art has always provided great inspiration. I thank my buddy Ann Walton, who encouraged me to dust off the old piece (*ahem!*) and put it to good use.... Thanks also to Lucy Johnson and Noel Silva, a couple of wild women whose enthusiasm for doing it Up Against the Wall forced me to ask the fatal question, "So, what is it about these guys?"

This publication is set in a marvelous futuristic universe, circa 2789. There is an alliance of planets, an interstellar Green Peace/United Nations/National Geographic Society called the Galactic Exploration Society, bound together with a common goal. The fleet consists of scientists, adventurers, information gatherers and ambassadors, striving toward the betterment of all lifeforms through knowledge. New races with ancient conflicts wait for the diplomatic intervention of the GES peacekeeping officers, those men and women who hold dear the preservation of individual expression and freedom. GES’ main base is located on the third planet in the Sol System, Gaia. Earth. [2]

With space travel, unique wolf-like races and danger around every turn, you'll love this series! And don't miss the fact that while the story is original, Tami likes to 'cast' her characters with beloved people from other shows, such as The Professionals, The Sentinel, Starsky and Hutch, Ladyhawke and more! With wonderful artwork by Koz, see who you can spot! [3]