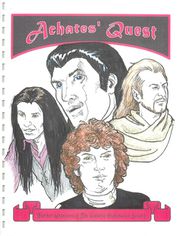 Achates' Quest is a 129-page original slash novel, one of three in a series by Robyn LaSalle in The GESE Universe (the Galactic Exploration Society of Earth).

Fandom characters sort-of portrayed in this series are from The Professionals, Starsky & Hutch, Kiefer/Lou, Man from U.N.C.L.E., The Sentinel, Ladyhawke, 21 Jump Street, Miami Vice, and others.

This publication is set in a marvelous futuristic universe, circa 2789. There is an alliance of planets, an interstellar Green Peace/United Nations/National Geographic Society called the Galactic Exploration Society, bound together with a common goal. The fleet consists of scientists, adventurers, information gatherers and ambassadors, striving toward the betterment of all lifeforms through knowledge. New races with ancient conflicts wait for the diplomatic intervention of the GES peacekeeping officers, those men and women who hold dear the preservation of individual expression and freedom. GES’ main base is located on the third planet in the Sol System, Gaia. Earth.[1]

With space travel, unique wolf-like races and danger around every turn, you'll love this series! And don't miss the fact that while the story is original, Tami likes to 'cast' her characters with beloved people from other shows, such as The Professionals, The Sentinel, Starsky and Hutch, Ladyhawke and more! With wonderful artwork by Koz, see who you can spot! [2]

An alternate universe, multi-fandom crossover with a science fiction setting involving space travel and wolflike creatures. The Pros characters are presented as Raimon Autumnwolf, who is searching for his missing mate, Beauxde' Ravenswood, who has possibly been kidnapped. All the characters are inspired by media ones, but without their identities.[3]

In 1983, a not-quite sixteen year-old completed—in pencil—what she called "a novelette." The story came to her "in a dream," and while she recounted in her foreword the multitude of projects she had started but could never seem to finish, she spoke of this particular effort as being something of a personal accomplishment. She added that she planned to "send this story far," expressing a desire to share it with as many people as possible, in hopes of touching other hearts with a tale of devotion and the lengths one will go to, in the name of love.

Thirteen years later, on the verge of her twenty-ninth birthday, a young woman puts the final touches on a story she has kept tucked away in her memories, one of the few things from her past she really cares to remember. Brought up to date, the original "novelette" is but a shadow of its former self...just like its writer. Achates' Quest has not lost much in translation, surprisingly. It is and always has been a story of one man's dedication to his dearest friend, believing in him when others would not, determined to face any odds, and keeping to a promise to always be there when he is needed. These people are so rare; you can count yourself lucky if you have someone like that, in your life. For myself, I have known only two people who have always been there for me, and I thank the powers that be to have been blessed with them. In rewriting Achates' Quest, I made a few necessary changes to fit it into my sci fi universe, following behind The Turn of a Friendly Card. It is still the same story of undying love, that which exists between the characters Beauxde Ravenswood and Raimon Autumnwolf— Bodie and Doyle, by any other name. I have always loved Pros A/U; something about these men lends itself well to fantasy. And like Rai in his search for his missing Beauxde, I had my own share of obstacles to overcome; in February, I lost the last three chapters and epilogue, just moments from completion. I was stricken for months, unable to go near the PC to recreate the files. It wasn't until two obstinate Ruvmanu and one insistent mate prodded me just enough to drive me back to the keyboard, that I was able to finish. I guess you could say it was another personal accomplishment. As for the original story? I won't even show that to my best friend, now. Going through it, I did get a few good laughs out of my own grammatical errors and some of the crazy, impossible ideas a naive plebe could come up with, back then. Talk about an imagination.... I hope you enjoy reading the now Achates' Quest as much as I enjoyed writing it. I still have a lot of stories on the shelves that I've never finished—some things never change, no matter how many years go by. Maybe I'll pull another one down, dust it off,and see if that old spark can be rekindled.

After all, love makes a person do some crazy shit.

A space adventure. In the foreword, Robyn states this is a story of undying love, following her first zine from this series, Turn of a Friendly Card. The characters Beauxde' Ravenswood and Raimon Autumnwolf - Bodie & Doyle, by any other name - make another appearance as the leads for this zine. It's a strong h/c story with Raimon searching the stars for his lover, Beauxde', who's missing presumed dead. A collection of other characters move through the story as Raimon refuses to give up his search.[4]