Timeshift is a gen AU Man from UNCLE anthology. Each volume is a collection of stories based on the U.N.C.L.E. universe being brought from the '60s to the into present time.

Timeshift 1 was published in 1998 and contains 147 pages. Cover art by CLH Wessel. Editor, Nan Mack. On the cover: "The Adventures of George and Quentin." 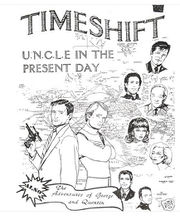 [Clara]: I’ve decided to declare this ‘guy’ week for MFU recs. A significant portion of MFU fandom is male (and has always been so) and some of them write fanfic. Indeed, arguably the first MFU fanfic was written by guys, David McDaniel and some of his friends from the SF community. Interestingly, I've found that when I’m reading a guy-written fanfic story, I encounter a somewhat different general sensibility.

On the gen side, Bill Koenig has been around quite a while and is widely known for his encyclopedic knowledge of the series’ canon. If you have a question, probably he can answer it.

Bill also writes a long running consistent universe that appears both in print and on the Internet. Borrowing a concept from classic comic book series, Bill’s universe is “time-shifted” so that Solo, Kuryakin, and the entire U.N.C.L.E. organization function in present day.

The stories within this universe feature complicated plots, lots of inside jokes and roman a clefs, guest appearances by other fictional characters (Steve McGarrett and others from Hawaii 5-0 show up often) and various other pop cultural references. Most of it is clever and breezy --- reminiscent, in fact, of the original Ace paperback novels.

However, occasionally, things get serious, as they do here in this touching character study, a sequel to the popular episode, “The Terbuf Affair.” It’s told from Kuryakin’s perspective, and kicks off with a mysterious and uncharacteristic plea from Solo to “mind the store.” It’s not even delivered in person; Solo has already, inexplicably, disappeared. Naturally, Kuryakin follows his partner’s trail and it’s a good thing, too, because as with the original episode, Solo is really going to need him. [1]

Timeshift 2 was published in 1998 and contains 152 pages. Cover art by CLH Wessel. Editor, Nan Mack. On the cover: "Plus the Boris Ingster Papers." 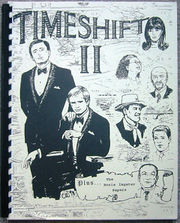 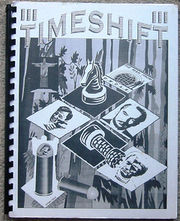 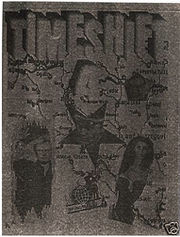 Timeshift 5 is 96 pages, was published in 2001. It was edited by Carol Lynn and Sandra Giraud. 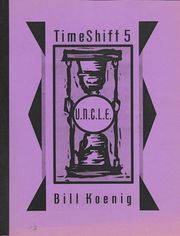 [The Infinity Affair]: We do have male authors in this fandom. Really! The imminently knowledgeable Bill Koenig's works are written as if MFU was being broadcasted today, but he includes plenty of canonical and intertextual references to integrate the series' roots into the present day. "Come With Me to the Casbah Affair" was originally meant to bring back Colonel Hubris, but unfortunately Victor Buono wasn't able to reprise the role. Koenig writes a convincing, entertaining revival epic of this memorable and highly underrated THRUSH villain again, and again, and again... [2]

[The Treatment Affair]: Looking at the list of MFU stories in crack_van, when I started this round of recs, I got the strong and unpleasant impression that the whole body of gen stories and gen authors were somehow neglected. So I tried, since the beginning, to award them a fair share of place and praises and, with more time, I could have presented much more of them I always re-read with most interest and pleasure, especially when I want to rediscover the features and the flavour of the show.

That's peculiarly true with Bill Koenig's stories, which, in spite of his timeshift setting, could be easily taken as scripts for some episodes of an hypothetical U.N.C.L.E. revival, with their fast pace of action scenes, accuracy of the U.N.C.L.E. background and fidelity to the international organization's ideals, great villains and likable innocents. It's interesting to note that his original characters are seldom helpless or shallow, and it's especially true of his female characters who are not the conventional and one-dimensional figures you so often find, curiously, in female authors' works. In his stories, women are usually quite smart, lively and realistically depicted. They don't swoon at the first appearance of a brave, bold, and good looking male agent, would he be Solo or Kuryakin; that's really a refreshing experience for a seasoned MFU fanfiction reader! Could it be that male writers are the most apt to render a faithful picture of the other half of mankind?

Let's come back to this story; I chose it because it's not pure action and adventure: it gives as much importance to the emotional life and moral consciousness of the heroes, dealing honestly with the inner conflicts and traumas they are exposed to in the line of duty. Here Napoleon Solo is held captive in a fake psychiatric hospital and submitted to a "treatment" based upon reactivation of guilt feeling, a feeling he cannot avoid when confronted to his partner's supposed demise and the memories of the many people whose death he has been involved with, had he killed them as enemies or endangered as innocents. After his rescue (by a very clever and professional U.N.C.L.E. female agent), he will remained deeply affected as his partner, lucidly, acknowledges:

The American lay back down and seemed as if he would go back to sleep. Illya looked at him for a moment, and wondered if should say something more.

Kuryakin held back. Although Illya knew only some of the details, he knew in a way Solo had been violated. Not physically, of course, but in a way that was just as real to Napoleon. In the end, it would be up to his friend to mention it. For Kuryakin, the best he could do is be there when that happened.

The idea that true communication and understanding between friends is more present in shared silence than in idle talks or untimely confidences is still righter between agents but...leaves the reader curious about what could have been said later (if ever) by the partners after such an experience... [3]

Timeshift 6 was published in 2003. It is a 103-page novel by Bill Koenig called "The Ragnarok Affair." It is illustrated by Sepia. 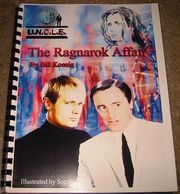 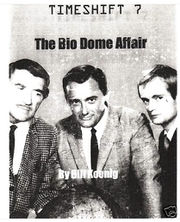 Timeshift 8 is an 87-page novel by Bill Koenig called "The Tour of Duty Affair." 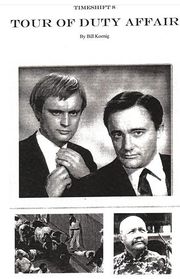 Timeshift 9 was published in 2006 and contains 92 pages. It is a novel by Bill Koenig called "The Venture Affair." 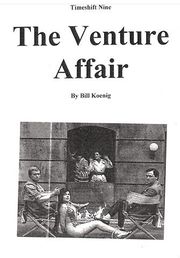 Timeshift 10 was published in 2008 and contains 83 pages. It is a novel by Bill Koenig called "The Revengers Affair."

Zines with other Timeshift Stories