Buck Rogers is a franchise about a fictional character of the same name who first appeared in a novella titled Armageddon 2419 A.D. by Philip Francis Nowlan published in the August 1928. The character was originally known as Anthony Rogers. Nowlan later adapted Armageddon 2419, A.D. and changed the hero's name from Anthony to Buck. The strip made its first newspaper appearance on January 7, 1929. Later adaptations included a serial film, a television series, and other formats.

Buck Rogers and Buddy Wade are in the middle of a trans-polar dirigible flight when they are caught in a blizzard and crash. Buddy then releases a special gas to keep them in suspended animation until a rescue party can arrive. However, an avalanche covers the craft and the two are in suspended animation for 500 years. When they are found, they awake to find out that the world has been taken over by the outlaw army of Killer Kane. Along with Lieutenant Wilma Deering, Buck and Buddy join in the fight to overthrow Kane and with the help of Prince Tallen of Saturn and his forces, they eventually do and Earth is free of Kane's grip.[1]

The film starred Buster Crabbe as Buck and Jackie Moran as Buddy.

Buck Rogers in the 25th Century 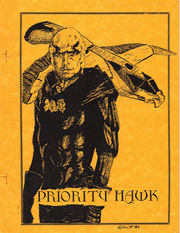 Cover of the fanzine Priority Hawk (1985), featuring the Buck Rogers in the 25th Century character Hawk. Art by Jean C..

A 20th century astronaut is caught in a freak accident in deep space, causing his spacecraft Ranger 3 to be blown into an orbit that returns him to Earth almost 500 years later. Earth is recovering from a nuclear war and is coming under hostile attack by the Draconian Empire. The later series has based on a spaceship exploring the unknown reaches of space.[2]

Buck Rogers in the 25th Century is an American science fiction adventure television series that ran for two seasons between 1979–1981, and the feature-length pilot episode for the series was released as a theatrical film in 1979. Buck's real name Anthony was changed to William.