You may be looking for the Star Trek: TOS zine Mindgames. 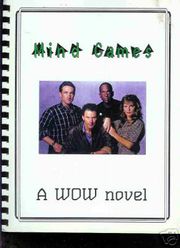 From Media Monitor: "The aliens are going after psychics and only the Blackwood Project stands in their way."