From Fanlore
(Redirected from Podficcers)
Jump to navigation Jump to search

Some fans use the term podfics and podcasts interchangeably;[1] while some podcasts include readings of fanfiction, they are not the same thing. 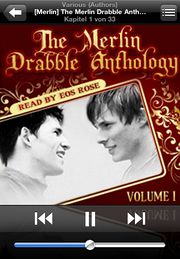 Xena audiofic was distributed on tapes (see Carol's Xena Fan Fiction Tape Consortium) as early as 1996[2] and later on burned CDs.[3] Femslash fan Tarae remembers first seeing WordWarrior's Xena fanfic recordings listed on a website in 1997, but was unable to acquire the tapes due to living in Europe.[4] Tarae also recalls Xena fans making "fanfic mix tapes" to give to other women they crushed on at conventions.[4] The recorded stories back then were called "audio fan fiction"[3] or "audio fiction",[4] although this may still be the Xena fandom term for podfic (as of 2009).[5]

While there are many available programs for audio recording, Audacity is one of the most popular within fandom as it is free, is fairly intuitive, and is available for PC, Mac, and Linux. Several podficcers have posted tips for recording successfully - including noise reduction and information on bit rates, along with other technical explanations.[20] Mac users have posted Garageband tutorials as well.[21][22]

Distribution methods vary. Some podfic may circulate by email or through locked communities and forums, while other podficcers advertise, distribute, or link to their creations publicly. Publicly available podfic files are usually uploaded to a free file-hosting service, the podficcer's own website, very occasionally the author's website[23], an archive such as the Audiofic Archive, or all of the above. Once the file is uploaded, other fans can then download and listen to the podfic anywhere, any time (depending on their access to technology).

Over time, streaming has become more widely available, and more modern free file hosting allows for some form of streaming, unlike the earliest generation of sites used by podficcers (YouSendIt, MegaUpload, MediaFire, etc.). Although intended for video streaming, Youtube has always been used by some for audio streaming; other streaming options used by podficcers include SoundCloud, as well as file hosts like Dropbox, Box.com, Google Drive, etc. that that allow playback from the download page. Internet Archive is a noncommercial streaming option increasingly adopted since the late 2010s. paraka has provided noncommercial free podfic hosting to a number of fans for many years. The AO3 allows embedded audio players, but does not provide hosting. Historically, podfics hosted on the Audiofic Archive were zipped to prevent streaming, but when the site changed owners in 2021, the new owners indicated that streaming would become an option.

Streaming has a number of benefits, including allowing people to listen to the podfic on different computers, allowing listeners to "try before downloading" and making it easier to listen to more shorter podfics.[24] For listeners accessing podfic on their mobile devices, streaming is much easier than downloading.

French-speaking fandom has also become interested in podfic, with at least one archive/forum started in 2009, audiofics. At the time it was opened, a post on the main forum noted that there wasn't much in the way of French podfic on the internet.[25]

In December 2011 the German multi-fandom archive Animexx.de site admin cato announced the implementation of a new subsection for the fanfiction archive on the site for "Fanfiction-Hörbücher und -spiele" (fanfiction audio books and audio dramas).[26] As of July 2014 the section has about 70 fanworks listed, among these mostly German podfic (many works for original stories), podcasts and other audio-based fanworks.[27]

As of 2022, AO3 has a few non-English podfics in several languages. The most popular language for podfic on the archive after English appears to be Russian (62 works).

Common meta discussion topics have included feedback, accents, permission, cover art, metadata, podfic's status as a creative work,[28][29][30][31] and whether or how to include music.[32][33][34] Pod Aware, a week-long celebration of podfic begun in November 2011 and repeated in 2012 and 2014, has featured a lot of discussions about some of the common meta topics.

A dreamwidth community, podficmeta, was created in January 2010 "to articulate and debate aesthetic theories about podfic."[35]

A few podfic-specific podcast series have been created that include meta discussions: Auralphonic (2014-2018) and Behind the Pod (2019-present).