Open the Door is a popular Derek/Stiles story by Renay that was written between season one and two. It is a slow-build romance with an action-oriented B plot featuring faerie antagonists.

Since the fic was written in early Teen Wolf fandom, some elements are now jossed: Derek is a good alpha; Stiles, Scott, and Jackson all join Derek's pack; later characters do not appear; and Lydia Martin is left in a coma following Peter's attack at the end of season one. Meanwhile, the emphasis on pack and the use of non-werewolf magical creatures are good examples of Teen Wolf fanon. (Until season three hinted otherwise, werewolves were the only magical creatures in the show's mythology.)

A "spiritual sequel," Ours, was posted six months later. 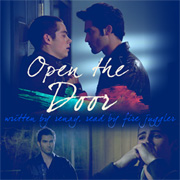 quintenttsy's cover art for Fire Juggler's podfic was recced as part of Amplirecathon by yue_ix, who praised the color, screencap selection, and composition, concluding, "I love how well [it] all comes together, is instantly recognisable and gives off the mood perfectly."[4]

Long, slow, patient, and entirely satisfying fic of watching Stiles fall in love with Derek and waiting for him to realise Derek loves him back.[5]

An early classic and longfic in this fandom, I've always loved how she merged the plot and the relationship development. It's epic and fun the entire time. My only reservation is that I don't buy Stiles having quite this low self-esteem, but taken on its own, this fic is great.[6]

I thought the characters stayed true to the show, and I enjoyed seeing the Stiles/Derek relationship develop in a way that I actually could see happening "IRL" (where IRL [equals] in the show's real life). Also, I'm a sucker for the fics where Derek is pining and has no idea how to show it, and Stiles knows everything, but is clueless about that one fact. It's the romcom lover in me. :)[7]

It's a great "Hi, convince me about this pairing" fic, and it's got great characterization, and I really really loved it, and it's quite long, which is unusual for Teen Wolf. It was like rolling around in a pile of leaves and awesome things.[8]