Bingo can refer to a type of challenge modelled after the original Kink Bingo, i.e. themed prompts are handed out as bingo card and can be filled to gather points.

Another use of "bingo," or "bingo card," is one that is used pejoratively in wank and serious discussions. There, it is used to identify arguments that fulfill an expectation. 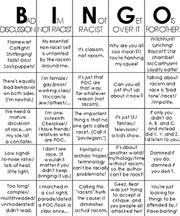 while some of the more experienced fen were running a bingo game on the themes they'd heard a dozen times before.

Yeah, I noticed that. It was... not the most welcoming thing ever, shall we say, given that in most online discussions bingo cards are a means to mock your opponent. Maybe it was a page full of fond community in-jokes or something, but when you raise your hand and say something, and people giggle and whisper and circle something on the paper on their lap, it's hard not to wonder if a laugh is being had at your expense....

Once I figured out what people were doing, two things went through my head: (1) Whoa, are there factions here? Is there a dispute? Did I somehow end up in the crossfires of some fight I didn't even know about? And (2) I see I'm not insider enough to get a bingo card. [3]