Fans have been recording fan fiction for as long as they have had the means. Tapezines are an early form. Podfic is a more recent incarnation of this practice.

Audio Fic as the Primary Work 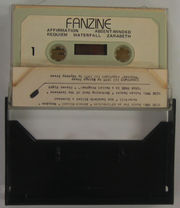 One example is Fanzine, a Star Trek: TOS anthology of spoken word and music.

Audio Fic as an Added Supplement

Some fans read fiction on tape in addition to the primary work as another way for fans to enjoy story.

Recordings for Those Who Have Difficulty with Print

In Datazine #32 in 1984, one fan, Bonnie Guyan, had this announcement: "Star Trek fanzines are now available for the visually handicapped. The adventures of the Enterprise and her crew are no longer limited to the printed page. HEAR your favorite zines come to life." She provided, as many fans did, her home address.

The Fanzine-Taping Service for Blind and Print Handicapped Readers was also one such activity circa 1992.

One fan, Lynda C, wrote an open letter in Universal Translator #23 and Interstat #80 in 1984 asking other fans requesting some thoughts and feedback on the subject of tape recording stories from fanzines. "I've recently become involved in a tape correspondence with an ST fan who is visually handicapped, and have been taping an occasional story from one of my fanzines to sent to her. In all honesty, I don't feel this is abusing anyone's rights or violating anyone's copyright, any more than the very common practice of lending out or trading zines. The basic question I'm posing here is: At what point does the practice stop being friendly sharing and become zine piracy? Suppose the tape is passed to a third party and beyond? Or suppose someone should decide to produce multiple copies of tapes for general distribution? Obviously, at some point, permission to sued the material is necessary. At what point? And who is authorized to give it -- the author, the zine editor, or both? There is also the question of reimbursement. If multiple copies are made, is a contributor's copy in order? If the tapes are sold at a profit, are royalties to be expected? And in either case, who is entitled to that reimbursement -- again, the author or editor?"

Lynda C received this answer from Jean Lorrah: "Over the years, several fans and clubs have attempted projects to tape-record fanzines for the handicapped. Each project has eventually stuttered to a halt for lack of volunteers, interest, publicity, or whatever. Now, however, [Terry T] is conducting such a project. She has permission to have all my fanzines (the NTM series, EPILOGUE, and the SAREK COLLECTION) taped, and to make copies for handicapped fans. Since Terry is blind herself, she is unlikely to lose interest in the project. As to protocol, if fans simply follow the law on copyrighted material, no one should have any complaints. That is, if a fan wishes to play or lend a legitimately obtained tape to a friend, there is no violation of protocol or copyright. If a person not authorized to do so makes copies of the tapes and distributes them, that is improper. Let's not get into the old hassle about copyrights on material which already violates Paramount copyrights; we are discussing fan courtesy here. I have no objections to anyone lending copies of my fanzines to friends (this frequently leads to my receiving a letter saying, "I read a friend's copy of so-and-so and just had to have one of my own-payment enclosed"), so long as no one is making his/her own copies of them.[1]

Recordings for Those Who Have Trouble with Postage Costs

"Would you believe I even have verbal copies of my own work that I made for overseas friends because tapes are cheaper to mail than bulky paper?" [2]

Audio Fanfiction in the 21st Century

A form of audio fanfiction called podfic has become popular since its appearance in the mid-2000s in LiveJournal fanfic communities. Fans in different fandoms and on different platforms use other terms such as audio fanfiction for what appears to be the same type of fanwork. For example, the Audio Fanfiction Library, last updated in May 2013, is a project in which each audiobook appears to be produced by more than one fan and fan writers are given first option on directing.[3] In contrast, podficcers in the Amplificathon community usually produce, direct, and voice their podfics themselves with no expectation of fan writer involvement. Also see the audiofic coordination thread at the Lois & Clark Fanfic Message Boards and this call for podcasters to join MuggleNet's "AudioFictions" project.

My Little Pony: Friendship Is Magic fandom has an independent community of Brony recorders who make heavy use of YouTube. In a conversation on Auralphonic, kitsuneheart commented that the biggest difference between podficcers and MLP recorders was that Brony culture didn't have as much emphasis on asking permission; another difference evident in the recording, but not mentioned, was the presence of male narrators, a rarity in podfic.[4] In the following episode of Auralphonic, Paraka and Jenepod speculated that these two facts were related.[5]

In a different twist, dramatic readings of fanfiction are sometimes recorded and uploaded to Youtube, usually by people who are not fanfic fans (or at least not fans of the fanfic they mock).

Some fans create fanfic audiobooks using text to speech software. A lot of podficcers do not consider TTS to be podfic[7] (for example, TTS is not allowed on the Audiofic Archive), though at least some TTS creators seem to disagree. This is a touchy subject as non-podfic fans have disparagingly compared podfic to changing the font and argued that it isn't creative. Meanwhile, TTS does involve human intervention and labor, just not the same kind as a human giving a vocal performance.